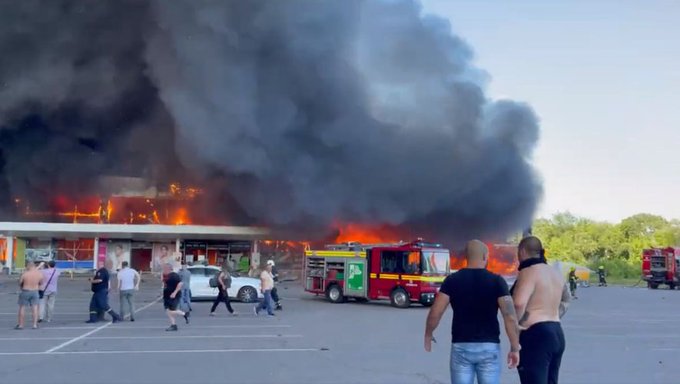 The most brutal face of violence was seen by Ukrainians on Black Monday, a day in which three fierce Russian missile strikes targeted civilians at a shopping mall in the central city of Kremsuk to “freeze” the world community. leaving behind 18 dead.

Russian barbarism escalated a few hours ago, as seen in the video-documentary from the moment of the attack, with panic prevailing and civilians running, trying to escape and escape a blood-stained scene. The noise is deafening the moment the Russian missiles fall and take lives.

In the footage from the video, citizens can be seen running in a nearby park, with the cameras from the spot witnessing the minutes of absolute chaos.

18 dead from the Russian blow

The death toll from Russian missile strikes is 18.

Firefighters and soldiers are searching for survivors in the rubble of a busy shopping mall hit by an attack condemned by the United Nations and the West.

Relatives of the missing are waiting at a hotel on the street where the mall is located and where rescuers have set up their base.

More than 1,000 people were inside the mall when it was hit by two Russian missiles, according to Ukrainian President Volodymyr Zelensky.

According to Dmitry Lunin, the governor of Poltava, a region southeast of Kiev where Kremenchuk is located, 25 people have been hospitalized and 36 are missing.

This city in the center of Ukraine had about 220,000 inhabitants before the war and had so far escaped the bombing.

A survivor of the attack, Ludmila Mikhailic, 43, who is being treated at Kremenchuk Public Hospital, says she was shopping with her husband when she was blown up by the blast.

“I fell down with my head and fragments hit me in the body. “The building was collapsing,” he says.

“It was hell,” adds Mikola’s 45-year-old husband, with traces of blood on the bandage wrapped around his head.

A 10,000-square-meter fire broke out in the aftermath of the rocket blast, which was extinguished yesterday afternoon, authorities said.

“Today’s Russian attack on a shopping mall in Kremenchuk is one of the most shameful acts of terrorism in European history. “A quiet city, an ordinary shopping mall, with women, children, ordinary people inside,” Zelensky said in a video posted to the Telegram yesterday.

“Only completely insane terrorists could strike such an installation with rockets and they should have no place on Earth,” Zelensky continued, referring to a “calculated strike.”

In the Bavarian Alps, the leaders of the Group of Seven most industrialized countries in the world issued a joint statement condemning the blow to the mall, which they called a “war crime”.

“Attacks carried out indiscriminately against innocent civilians are war crimes. “Russian President Vladimir Putin and other officials will be held accountable,” said a statement issued by the G7 heads of state and government.

Following the attack, the UN Security Council will convene on Tuesday at the request of Ukraine.

Russia has not commented on the attack, but Russia’s envoy to the UN, Dmitry Poliansky, has accused Ukraine of using the attack to win sympathy ahead of the June 28-30 NATO summit.

“We will have to wait for what our Ministry of Defense will say, but there are already too many sharp differences,” Polianski wrote on Twitter.

Yesterday I mentioned the burning shopping center in Kremenchuk, Ukraine, of which the Ukrainian president Zelensky falsely claimed that thousand people had been inside.

It has now been confirmed that the answer to my question is ‘yes’.

Today’s report on the war by the Russian Defense Ministry says:

On June 27, in Kremenchug (Poltava region), Russian Aerospace Forces launched a high-precision air attack at hangars with armament and munitions delivered by USA and European countries at Kremenchug road machinery plant.High-precision attack has resulted in the neutralisation of west-manufactured armament and munitions concentrated at the storage area for being delivered to Ukrainian group of troops in Donbass.

Detonation of the storaged munitions caused a fire in a non-functioning shopping centre next to the facilities of the plant.

The Ukrainians have published surveillance video from a park catching the moments of the two explosions. A large flash appears and people are running away as some debris falls down.

The park is around an artificial lake with an island in the middle that can be reached by a bridge. There is a small round building on the island.

bigger
Here is a Google satellite view of the whole scene. 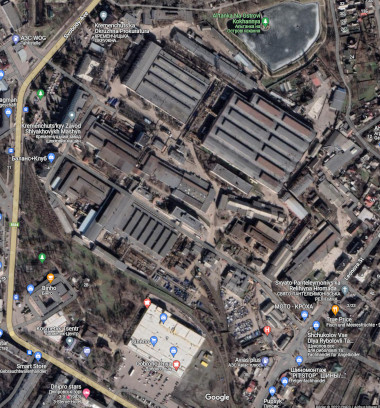 bigger
The light gray shopping center roof can be seen south of the large Kredmash machine plant in the center. The small park from which the surveillance videos come is directly north of it. Google has marked it in green as some special recreational space. The factory has direct rail access at its southern side with several rail tracks for loading and unloading machinery. Rail access makes it an ideal space for preparing or repairing heavy weapons. It seems that the railway area was one of the two targets.

Still not convinced? Well, here is video from a Ukrainian TV station taken on the factory grounds. It is showing a crater and the debris of the factory. The areas where it was hit are pretty much destroyed. 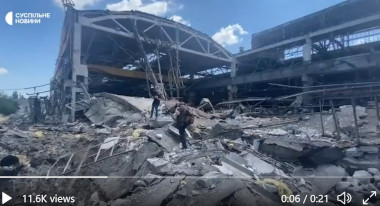 bigger
According to the Ukrainian emergence services the attack has caused the death of 16 people and wounded 59. So most of Zelensky’s ‘thousand’ people inside the shopping center must have either survived or never existed at all with the later being the more likely case.

The shopping center was obviously as empty as its large empty parking space I mentioned yesterday. It somehow came on fire after the factory next door was bombed. Those who died were most likely soldiers or factory workers who were preparing ‘western’ weapons for delivery to the front.

Zelensky’s lie has been debunked just as the other horror fictions he has told about Russians.

Meanwhile the White House is preparing for a retreat from Ukraine. CNN headlines:

The piece is by the ‘deranged conspiracy theorist and scandal plagued CIA propagandist‘ Natasha Bertrand. That makes it an official administration position.

(CNN) – White House officials are losing confidence that Ukraine will ever be able to take back all of the land it has lost to Russia over the past four months of war, US officials told CNN, even with the heavier and more sophisticated weaponry the US and its allies plan to send.

Advisers to President Joe Biden have begun debating internally how and whether Ukrainian President Volodymyr Zelensky should shift his definition of a Ukrainian “victory” — adjusting for the possibility that his country has shrunk irreversibly.

US officials emphasized to CNN that this more pessimistic assessment does not mean the US plans to pressure Ukraine into making any formal territorial concessions to Russia in order to end the war. There is also hope that Ukrainian forces will be able to take back significant chunks of territory in a likely counteroffensive later this year.

That ‘counteroffensive later this year’ seems very unlikely to me. When the Russian forces see any buildup for one they will destroy it before it can take off.

The Ukraine will not regain any of the territory that the Russians do not want it to regain. It isn’t in the position to do so militarily nor through negotiations. It will simply have to accept defeat and give up on the east and south and accept the loss of the source of 70-80% of its former GDP.

All this was completely foreseeable since the very first day of the war.

The strike left a large crater at a factory that was used to stockpile weaponry, according to Moscow
Ukrainian firefighters extinguish a fire at the shopping mall in Kremenchug, Ukraine on June 27, 2022. © Getty Images / Anadolu Agency

The Russian military on Monday targeted the Kredmash vehicle plant in the Ukrainian city of Kremenchug, the chairman of the factory’s supervisory board, Nikolay Danileyko, has confirmed. The plant is located right next to the shopping mall that was destroyed in a blaze after the missile strike, with 18 people reported killed and over 50 injured.

The factory was a civilian facility and had not produced military vehicles or parts for them since 1989, Danileyko told local media. The plant’s workers were not injured in the attack, he added.

Footage from the scene aired by local media shows a large crater in the middle of one of the factory’s hangars. The strike inflicted heavy damage on the building, blowing away parts of its roofing and walls and rupturing underground piping.

Ukrainian President Volodymyr Zelensky claimed the shopping mall was tightly packed, with “more than a thousand civilians” visiting it at the time of the strike. Footage from the scene taken moments after the strike, however, showed that the parking lot by the mall was almost empty, with several armed individuals in military uniform roaming the area.

The mayor of Kremenchug pinned the blame for the civilian casualties on the venue’s operators, accusing them of ignoring a warning of an imminent air attack.

“Ukraine is at war, so ignoring an air raid alert is a crime, which the tragedy in Amstor [mall] demonstrated once again,” the mayor, Vitaly Maletsky, wrote on social media.