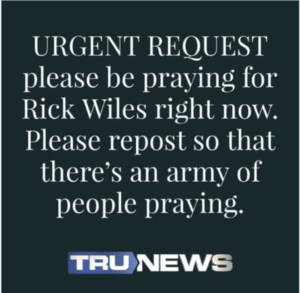 I have been unable to get much detail other than to say the situation is “serious”. I admit my mind has been turning to conspiracy and thinking who might have had access to the Wiles’ house and then I remembered that Rick and Susan had taken in Milo Yiannopoulos for several days.  It appears that one other person was thinking along the same lines.

“In July 2019, during an interview with The Jewish Journal, Yiannopoulos described himself as a Zionist who believed Israel is a bastion of civilization in a region of Islamic tyrants. During the interview, Yiannopoulos advocated for a Jewish “super-state” in the Middle East, and endorsed Israeli and American forces assassinating all Hamas leaders.[95]”

I was concerned that Milo’s presence at Flowing Streams was some kind of setup, and his time spent with Trunews should be revisited and investigated

However, I discovered this on Gab today, from 5 days ago.

First the staff at TruNews and now Richard and Susan Wiles

I must say I am suspicious.

There are powerful forces that would like to bring TruNews down –  but hopefully we will be filled in in due course.

One thought on “Some speculation on Rick Wiles and TruNews”