While scientists continue to determine just how deadly, and how transmissible the new Omicron Covid strain is, it’s worth noting that South Africa has seen its new daily COVID cases quadruple in recent days, even if the vast majority of these new vases have only mild symptoms.

Whether it’s omicron or some kind of seasonal dynamic driving it, South Africa’s daily number of confirmed COVID cases almost quadrupled from Tuesday as the omicron variant spread across the country. The country recorded 16,055 infections in the last 24 hours and a positivity rate accelerated to 24.3% from 16.5% on Tuesday, according to the National Institute for Communicable Diseases. 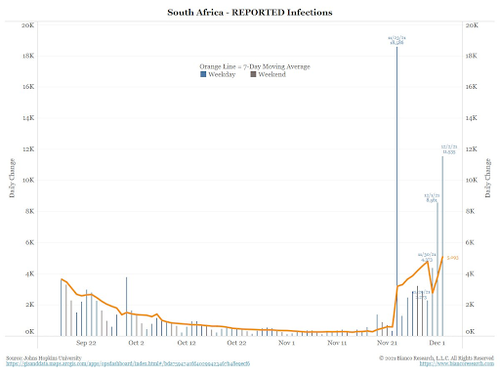 A South African study of infections since the start of the pandemic found that the risk of reinfection from the omicron coronavirus variant is three times higher than for any previous strain.

Back in North America, the number of confirmed omicron cases in Canada has risen to 11.

A South African study of infections since the start of the pandemic found that the risk of reinfection from omicron is three times higher than for any previous strain.

Another 25 COVID deaths were reported in South Africa, bringing total fatalities to 89,944 to date. Hospitals reported an increase of 279 admissions in the past 24 hours, bringing the total to 3,202. In Gauteng each infected person on average is able to pass on the virus to another 2.33, according to the National Institute for Communicable Diseases. That’s a record rate, and any level over 1 means the virus’s spread is accelerating.

It’s not just Pfizer that’s scrambling to get a head start on its research into the omicron variants; the WHO said Friday that some 450 researchers from around the world are teaming up to isolate the highly mutated COVID strain, grow it in a slab, validate its genomic sequences.

“We welcome that because they will help us to prepare,” she said. “WHO is contacting each of the vaccine manufacturers and requesting from them information on their current plans to modify their vaccines, if they have any preliminary data, and the time line for the scaling up and implementation of the modifications.” –Bloomberg

As American authorities search for more cases of omicron, Bloomberg reported that NYC has a new problem: informing all 53K attendees of a recent anime convention at the Javits Center that they should strongly consider getting tested.

Finally, the President of Botswana told CNN in an interview that four diplomats who visited his country earlier in November were actually the first individuals to be carrying the omicron variant. President Mokgweetsi Masisi said some of the diplomats included Europeans. Botswana is home to the first case of omicron.