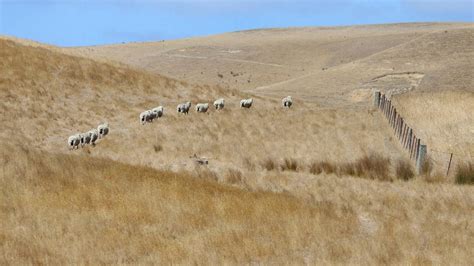 When in Gisbourne soil moisture is 27 % of average!

This is reported this way as a signal the government, which is preoccupied with a “covid-19” plandemic, will do nothing for farmers.

Southern Marlborough farmers are heading into winter with a grim outlook.

The region is experiencing extreme drought-like conditions and there’s no end to the dry weather in sight.

Even brown, it’s spectacular but the southern Marlborough landscape has officially been classified as a large scale adverse event by the Government. And the big dry just won’t let up.

“If it does get really really dry this summer, we’ll be talking very closely with our bank manager,” says farmer Rob Peters.

The Todhunters run ewes and trading cattle on their 1100-hectare hill country farm on the Kaikoura coast just north of the Clarence River.

Todhunter says it’s the driest autumn he and many others have seen.

“We’re down 50 percent in our stock numbers and the stock that are here are all getting fed supplements which is all being bought in from elsewhere,” he says.

They’re now spending seven long days a week feeding those supplements out at a cost of around $1100 a day.

A bit further north in Ward, the dams are empty on the Peters’ 1300-hectare property. The family farm has no springs or water source other than rain.

They’ve been down this road before and the Peters made the decision to destock early this time. Numbers are now down around 40 percent.

Drought is something these farmers are used to but this year is proving a real grind.

“It’s more the duration of it, it’s just carrying on, and we’re expecting it to stay dry for some time yet,” Peters says.

NIWA says the area has had many consecutive years of drought but the last two have been particularly bad.

“Just last year, that was a dry year, only about 71 percent or normal rainfall occurred for the entire year. Then you follow that up with a dry summer, we had less than half of what is normal in terms of rainfall for this past summer,” NIWA’s principal scientist Chris Brandolino says.

The outlook isn’t great with less than normal rainfall expected over the next three months.

The Peters’ farm holds the record for NZ’s lowest-ever six-monthly rainfall – that was the summer of 2001 where they received just 52mm in six months.

“And we’re hoping not to break that record ever again, ever again,” Peters says.

The Government has extended its drought support in the region to run through until November this year. But young farmers like Todhunter says it’s not enough.

“I’d definitely like to feel like the Government was more behind us, I think we are being used as targets a bit for political gain a bit. It would be nice to see more funding around water projects,” Todhunter says.

And despite a growing awareness around mental health in rural communities, it’s still a real issue.

“It’s really hard, I know round here some of the guys are really struggling, big time,” Todhunter says.

“It’s not like a fire or a flood where it comes on all of a sudden, it’s more just a slow grinding,” Peters adds.

This area was nailed by the 2016 earthquake with homes and infrastructure destroyed.

And the only thing they can do is keep going and wait it out.