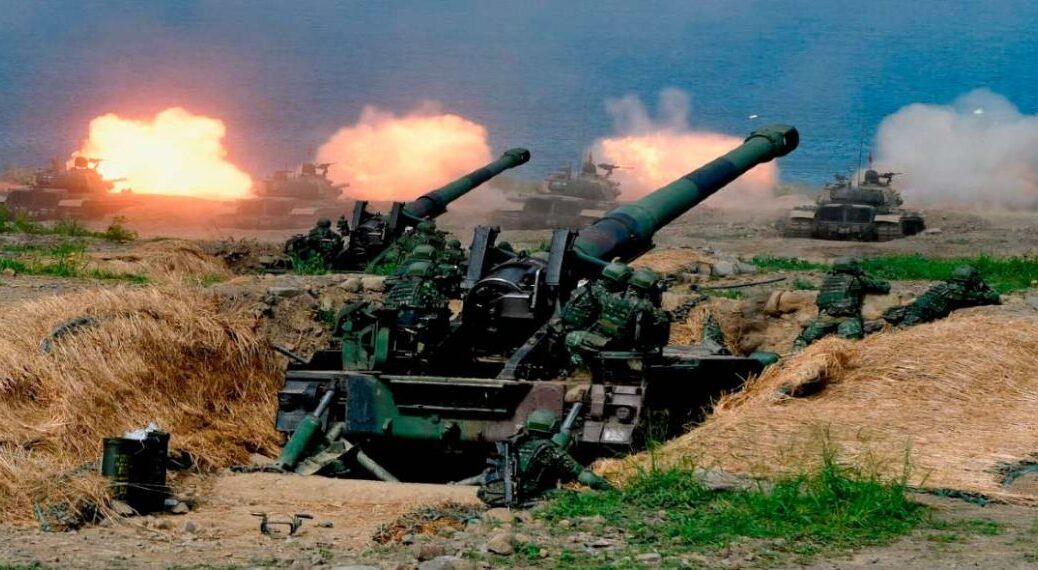 Taiwan is slowly and steadily turning into a new Ukraine as American Senators are preparing a bipartisan bill that will activate the World War II military aid program, “Lend-Lease Act”, for Taipei as well, as they did with Kyiv.

It is questionable whether the US defense industry can withstand fighting on two fronts. American action is also very risky as it will directly involve AUKUS against China. Soon South Korea-Japan, Australia and Britain will be called upon to militarily reinforce Taiwan in confrontation with Beijing.

In the USA they know and it is 100% certain that there will be a Chinese attack on Taiwan. The country’s leadership will choose when, but everything shows that the “zero point” is very close.

Today, on the first day of the largest military exercises in PLA history, ballistic missiles flew over the heads of Taiwanese people to land either in the island’s territorial waters or in Japan’s EEZ.

This is an unprecedented military act of intimidation that has never been done before in history. One mistake and the Chinese missile, even from a manufacturing defect, will crash into Taiwan. The fight is so close.

At the same time, China’s ambassador to France spoke publicly about “re-education” of the people of Taiwan which will take place after the reunification of the island with the mainland while General Meng Xiangjun (NDU of China) explained that the six areas in which the PLA conducts its live-fire exercises delineate the encirclement of Taiwan, potentially sealing Keelung as well as the Bashi Channel.

He spoke of a rehearsal for war and a blockade of Taiwan. That WarNews247 reported yesterday

This version is strengthened by the fact that a military phalanx consisting of 160 ZBL08 amphibious armored vehicles of the Chinese Army headed towards Xiamen, in Fujian province across from Taiwan.

These will be loaded onto landing ships.

At the same time, the PLA’s Eastern Military Command revealed a few minutes ago that it has deployed up to 100 types of aircraft in the north, southwest, southeast of Taiwan. Y-20U aerial tankers are also confirmed to have been developed.

In other words, we have a repeat of the Ukraine scenario. The exact same attack simulation tactics were used by the Russian Army.

Chinese Ambassador: We will take over Taiwan and re-educate it

A senior Chinese diplomat has publicly revealed that Beijing will “re-educate” the people of Taiwan after “reuniting” the island with the mainland.

Speaking to French broadcaster BFMTV on Wednesday, Lu Tsai described Pelosi’s trip to Taiwan as an “unnecessary provocation” which “created a great danger”.

According to the diplomat, most people in Taiwan supported reunification with China a few years ago, but the Democratic Progressive Party’s “anti-Chinese” propaganda brainwashed the people.

This is why he believes that the Taiwanese population needs to be “re-educated”.

“After the reunion, we will retrain. I am confident that at that time, the people of Taiwan will once again become favorable to reunification.

The population will then regain its patriotic feeling. Education will be the main weapon of this work, and it will not be “under threat”.

How the “reunion” will take place is obvious…

The US activates the Lend-Lease Act for Taiwan

For the second time since 1941 and World War II, the US will again activate the Lend-Lease Act. This time for Taiwan.

This Act, which was also approved for Ukraine, will allow US forces to transfer military equipment directly by cutting red tape.

This act was originally passed by the US Congress in March 1941 to provide the Allies during World War II with military equipment/supplies and most importantly, oil, to continue fighting the Axis powers around the world and crush Hitler’s forces.

The Lend-Lease program created during World War II is considered a game-changer in the conflict, as it allowed the US to quickly resupply the Allies without time-consuming procedural hurdles.

Republicans are reportedly preparing to introduce the same legislation that applies to Ukraine to create a “lend-lease” military aid program for Taiwan to fend off increased Chinese aggression.

The bill is the brainchild of Senators Michelle Steel and Marsha Blackburn.

“The Chinese Communist Party continues to bully and pressure our ally, and the United States must always stand with freedom and democracy,” said Sen. Steel, (R-Calif.).

The bill would authorize the president to lend or lease weapons and military equipment to Taiwan. In return, the country’s government is required to repay the cost of “restoring or replacing” the loaned weapons over a 12-year period.

The bill states that the White House can choose to renegotiate the repayment amount if it determines that the money would detract from the national security of both Taiwan and the US.

“Taiwan is our largest partner in the Indo-Pacific region and its continued dominance is essential to challenging the New Axis of Evil,” said Blackburn (R-TN).

“Taiwan must know that the United States will support it with defense supplies – including weapons and armaments – no matter what the Chinese Communist Party says.”

The tactics have forced Taiwan to raise its level of preparedness and conduct nationwide drills while residents of the island regions have been subjected to air raid drills and other security measures.

Members of Congress say the federal government needs to send a strong message to China that aggression against a US ally will be countered.

“I am proud to lead this bipartisan bill through Congress to show the CCP that we will not back down from supporting our allies,” Steele said.

Taiwan’s official representative to the US told Fox News Digital that it welcomes any help in its fight for freedom.

“Taiwan is determined to defend our freedom and democratic way of life, and we will continue to work with the US and our like-minded partners to maintain peace and stability in the Taiwan Strait.”

“House Republicans are already moving forward with … proposing [legislation] that would create a sort of arms-lease program for Taiwan … is this an overreaction … raising tensions[?]”

The map of Taiwan’s 7th encirclement zone in red