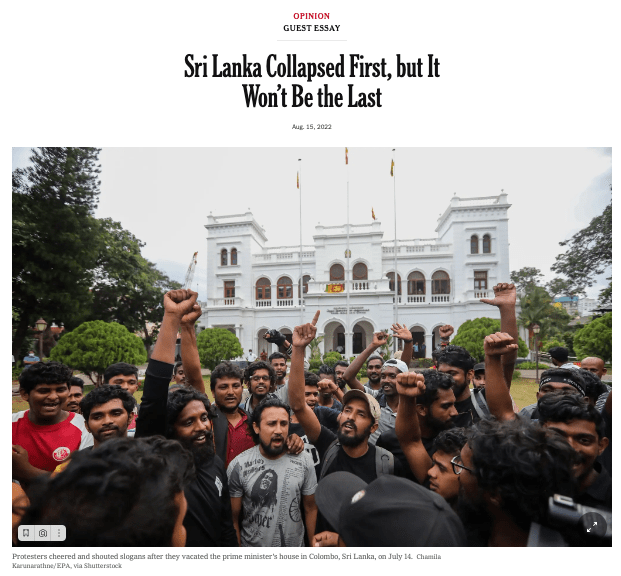 From behind a paywall

Sri Lanka Collapsed First, but It Won’t Be the Last

As a Sri Lankan, watching international news coverage of my country’s economic and political implosion is like showing up at your own funeral, with everybody speculating on how you died.

The Western media accuse China of luring us into a debt trap.  Tucker Carlson says environmental, social and corporate governance programs killed us.  Everybody blames the Rajapaksas, the corrupt political dynasty that ruled us until massive protests by angry Sri Lankans chased them out last month.

But from where I’m standing, ultimate blame lies with the Western-dominated neoliberal system that keeps developing countries in a form of debt-fueled colonization.

The system is in crisis, its shaky foundations exposed by the tumbling dominoes of the Ukraine war, resulting in food and fuel scarcity, the pandemic, and looming insolvency and hunger rippling across the world.

Sri Lanka is Exhibit A.  We were once an economic hope, with an educated population and a median income among the highest in South Asia.  But it was an illusion.  After 450 years of colonialism, 40 years of neoliberalism, and four years of total failure by our politicians, Sri Lanka and its people have been beggared.

Former President Gotabaya Rajapaksa deepened our debt problems, but the economy has been structurally unsound across administrations.  We simply import too much, export too little and cover the difference with debt.  This unsustainable economy was always going to collapse.

But we are just the canary in the coal mine.

The entire world is plugged into this failing system and the pain will be widespread.