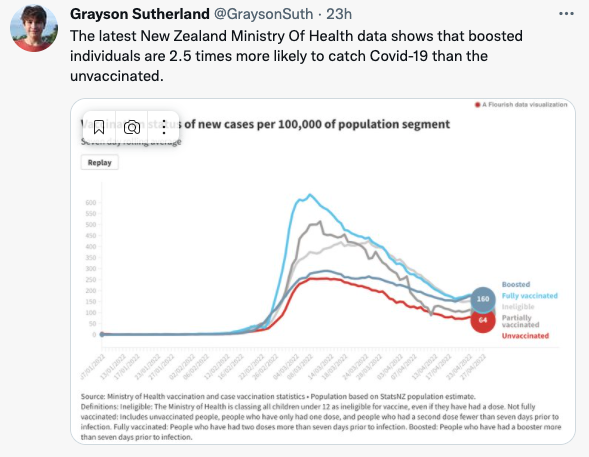 I live a very truncated life these days.

My day starts when I wake up and I peruse the media, usually in a set order, and post articles to Telegram. If I want to post on the blog I have to do it immediately after breakfast because after that my mind frequently turns to mush and I have to spend the afternoons in bed as my energy (physical, but mostly mental)craters.

It is also limited by the fact that I do not have contact with our erstwhile friends who are vaccinated, perhaps because they are afraid they are going to pick up the plague from someone who is socially-isolated but unvaxxed; certainly because there is nothing much to talk about any more.

When I came across information from NZ’s Ministry of Health that indicates that just short of 50% of those hospitalised by covid-19 have had the booster – definite evidence that people are losing their immunity rapidly and in all likelihood developing Acquired Immunity Deficiency ( in other words AIDS,  or perhaps we ought to call it VAIDS because it has everything to do with the vaccine and nothing to do with a HIV virus, i decided it might be nice to do a presentation.

I realised I could not possibly stand in front of a group of people and deliver a presentation with a spreadsheet so I decided to make a video. Even then, I had to get up at daybreak to make it when my mental faculties were still sharp.

I decided to give my presentation a dry run by playing it at a committee meeting of Voices for Freedom. In my naivete I expected that I might have been among supportive friends who were receptive to direct evidence.  But that was not the way at all.

I had been presenting the statistical data for about a minute when I was interrupted and told I would be “shot down” if I presented data that way and the data should be presented on a per capita basis as “cases per 100,000”.

Never mind that I had only made a simple graph of the number of people hospitalisations by vaccination status and had not yet even mentioned cases at that point.

Turns out that the person was reflecting the objections of her adult children who thought it was “junk statistics”.

Never mind that whatever the strengths of the arguments or the statistics, it would always be “junk” to those whose minds were already made up.

Never mind that the graphs were of secondary importance and made solely to illustrate what was inadvertently revealed by the MoH themselves. Anyone could see the point from the numbers themselves but I did a graph to make it easier to understand.

At least it was meant as a positive suggestion of how the evidence could be better presented and  was helpful and constructive.

I have made another short video with an update:

However, I was not quite ready for what came next, especially in the context of the company I was in.

The next response that came from the “opposite side of the argument” as it were, was that the statistics “could not be believed”.

I had had a previous interaction on social media with someone who said they did not believe the government stats, “ESPECIALLY these ones”, said without the benefit of even having gone through what was said.

I was dumbfounded at this response.

I am used to unthinking responses from people on social media who are clearly not up to discussing things at that level, but to see this response from someone in a “leadership” role and presumably influencing others?!

It was later reported to me what the same person said after I had been dropped off at home. This same person said the vaccine mandates were over and so, ipso facto, much of the problem had gone away and she expected people like her would be going back to work.

I realise that there are people out there who DO understand that this is a nonsensical notion and that even if the vaccine mandates had gone (they have NOT and they will certainly be back) we still have many people who have died or been permanently damaged from the vaccine, or lost their livelihoods.

I will now pass from evidence to speculation on what I believe to be the case.

I believe that, thanks to the numerous vaccine programmes around the world, rapidly increasing numbers of people are losing their immunity and ability to withstand even minor infections. When people start getting injured and dying from this in much larger numbers, there will be no acknowledgment that this is the case from any corner.

I also believe that with when that happens, the hard lockdowns and suppression of dissidents by the State will return with a vengeance and people will end up locked down and even more isolated than before.

If you don’t believe me just look at what is happening in Shanghai and now Beijing and then tell me it can’t happen here.

Have people forgotten the events at Parliament already?

In my own circle I have seen quite a number of unvaccinated friends come down with covid-19 (the latest is a friend from Nelson, caught from a vaccinated person. More than a handful of people that live near us have died from various causes that we put down to the vaccine.

A friend who has been a gravedigger for over 40 years who has lost his job, told us he has never buried as many people as he has over the last year.

Despite the wonderful contribution of thought leaders in New Zealand to our understanding of things, I have been disappointed beyond measure of what I see from social media – and now, beyond that.

I have always had a problem with my own country and its residents.  I have always seen myself more as a citizen of the world, at least until the advent of globalism and everything that comes with it.

We have always been an insular people. Is it any wonder, when we are a couple of small islands removed by a large sea from our nearest neighbour, with the next stop being Antarctica?

I see the energy of New Zealanders as being rather dense. Is it any surprise that many of the best commentators were not born here or have left the country?

CWe New Zealanders have long suffered from a particular trait called the “tall poppy syndrome”, whereby people who put their heads above the parapet are cut down to size. This goes together with a considerable degree of anti-intellectualism – well-described in a book from the 1970’s called “the Passionless People” by Gordon McLaughlan.

We have also become compliant to state power to a degree that I never deemed possible.

Is it any accident that almost the only people we put on a pedestal in this country are sports people?

With the onset of the internet and with cheap travel we could tell ourselves we were part of the wider world, although our brightest and best tended to live overseas.

With the plandemic, this has changed and we have as a nation become more insular, more narrow-minded and mean than we were ever before.

I know there are many, many exceptions to this generalisation; I apologise, but my observation stands.

What is different from the 1970’s when our insularity drove me to spend as much time as possible overseas is by comparison the population has been dumbed-down. Now, even those who attend universities are no longer taught how to think (I am very grateful for having been taught that skill) and many are not even particularly literate – the people I see writing on social media often lack the ability to string words together coherently.

So, I sit here, a refugee in my own country. I do not have a passport any more ( the last time I went overseas was in 2007) and have neither the money nor the health to travel, even if I wanted to.

My experience of the past few days has chastened me.

I won’t bother reaching out to try and warn of what I see coming down the pipes but will continue to sit in my room and preach to the choir, to talk to the middle distance.