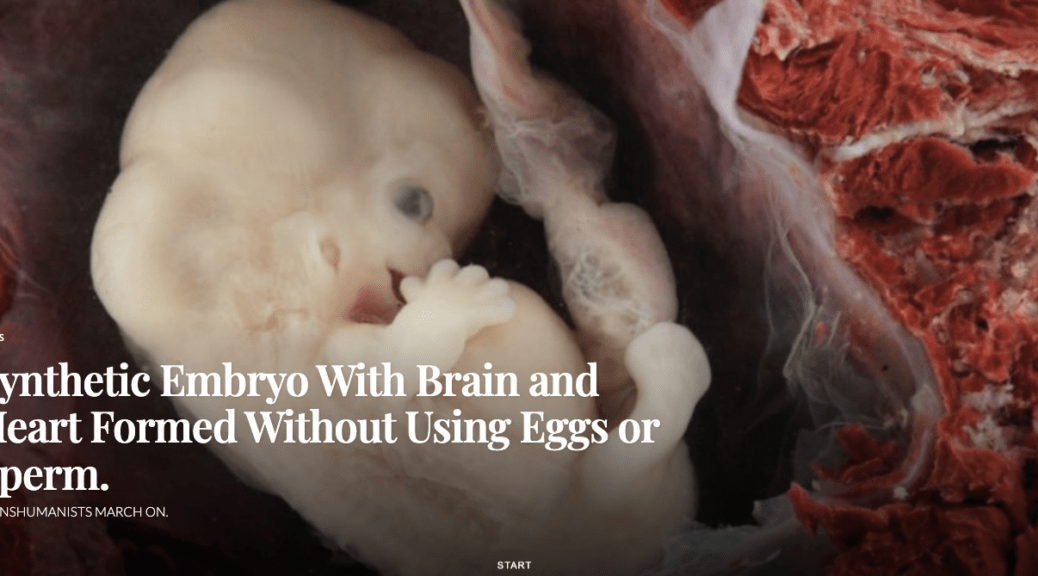 A synthetic embryo with cells capable of forming a brain and a beating heart was developed by researchers at the University of Cambridge using mouse stem cells. EuroNews described the effort as “yet another success in the unfolding race to develop embryos from human and mouse stem cells.”

“By inducing the expression of a particular set of genes and establishing a unique environment for their interactions, the researchers were able to get the stem cells to ‘talk’ to each other,” explains a summary of the work.

“The stem cells self-organised into structures that progressed through the successive developmental stages until they had beating hearts and the foundations of the brain, as well as the yolk sac where the embryo develops and gets nutrients from in its first weeks.”

The synthetic embryo model developed by the Cambridge team is unique, as it reached a record level of development where the entire brain, including the anterior portion, began to develop.

The findings, which took researchers over a decade of work, could potentially be useful in understanding why some pregnancies fail along with developing synthetic organs for patients awaiting transplants.

The research also opens “new possibilities to study the mechanisms of neurodevelopment in an experimental model,” according to Zernicka-Goetz.

“In fact, we demonstrate the proof of this principle in the paper by knocking out a gene already known to be essential for formation of the neural tube, precursor of the nervous system, and for brain and eye development,” she continued.

“In the absence of this gene, the synthetic embryos show exactly the known defects in brain development as in an animal carrying this mutation. This means we can begin to apply this kind of approach to the many genes with unknown function in brain development.”

In 2021, several teams managed to get human pluripotent stem cells (cells that can turn into any other type of cell) to self-aggregate in a Petri dish, mimicking the “blastocyst”. This is the earliest stage of embryonic development just before the complex process of implantation, when a mass of cells attach to the wall of the uterus.

Researchers using these human embryo models, often called blastoids, have even been able to start to explore implantation in a dish, but this process is much more challenging in humans than it is in mice.

In 2019, Science Alert reported on a “lab made human embryo” wherein they suggested “animal models can only go so far when it comes to pulling apart the complex mix of genetic and biochemical activity that turns a fertilised cell into a fully formed human.”s

One thought on “Synthetic Embryo With Brain and Heart Formed Without Using Eggs or Sperm.”