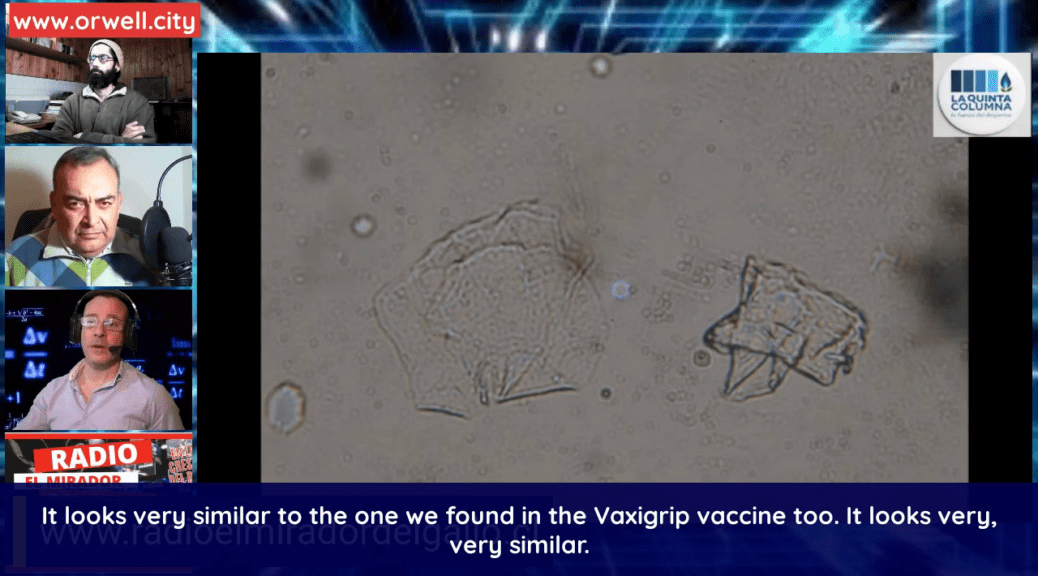 JULY 31, 2021 In a new Friday night radio program of Dirección Correcta, from the Chilean radio station El Mirador del Gallo, La Quinta Columna gave the scoop on a new finding: graphene nanosheets in rainwater.  The sample was taken hours after the chemtrail phenomenon has been observed in the skies. Just as this nanomaterial can be found in aqueous solutions, physiological saline, vaccines, and many other items of medical and industrial use, it can also be found in practically everything.  This explains, moreover, why there are…

Spain Has Admitted to Spraying Lethal Pesticides Under Chemtrail Program A Spanish meteorological agency has come out and said that it has taken part in a chemtrail programme to spray its territory with lethal pesticides: silver iodide, lead dioxide, and diamotide in order to fight Covid-19. Image Credit: imagii There have also been accusations that Spain is putting unauthorized amounts of pesticides in food – and ecologists have demanded a 50% reduction in the use of pesticides. On April 17th…

As many of you know, just this last week, we covered the Chemtrail piece that was broadcasted by the mainstream media and because of the response that we received by the radio listeners, as well as the social media platform viewers, I wanted to bring more information on this matter, which many of you requested. How couldn’t I, when waking up to massive spray trails, which continued throughout the day and that in my own backyard?

This latest full-length documentary produced by geoengineering watch.org brings the research up-to-dates, in particular the second half of the film which looks in detail at nanoparticulates in the air and the terrible effect they have on human health. We never used to have aluminium in our mitichondria and these metals makes the mitochondria resonate with wi-fi. And starts to heat up and destroy mitochondrial DNA rapidly.. it is the synergy of the metal in our body making our body resonant…

Dane Wigington has come out with his labour of love Dane Wigington   GeoengineeringWatch.org 10 March, 2021 GeoeongineeringWatch.org is pleased to announce the release of our groundbreaking documentary that conclusively exposes the existence of global climate engineering operations. Global climate engineering operations are a reality. Atmospheric particle testing conducted by GeoengineeringWatch.org has now proven that the lingering, spreading jet aircraft trails, so commonly visible in our skies, are not just condensation as we have officially been told. Over 75 years ago global powers committed the planet and populations…

I don’ t know the location of this other than it is New Zealand. The sky looks very much like what we see every time (very rare currently) that the sun comes out. We get skies like this and the clouds always billow out to produce complete cloud cover.  Early summer here and we are hardly seeing the sun. AIR NEW ZEALAND CAUGHT SPRAYING CHEMICALS AGAIN

The hot blob is back around New Zealand and we have a  la-Nina However, temperatures are quite a lot cooler than they have been in the last 4-5 years.  I can hardly think of the last time I have felt the sun on account of the washed- out sunless skies, day after day. I have stopped recorded but we have had a lot of conditions like this from Melbourne, Australia on those days when the sun does come out. Too often, this is the picture….