Torm A/S, a Danish owner of tankers, said its customers have asked about the cost of options to divert. Rates for so-called LR2 vessels are up 10%, and ships could divert around South Africa, according to Jacob Meldgaard, chief executive officer of Torm A/S, which owns product tankers.

Already, shipbrokers are reporting that oil traders have started hiring tankers with “just-in-case” options to sail around the Africa should the blockage drag on. Vessels sailing empty to collect oil in northwest Europe could get delayed, forcing the region’s exporters to seek alternative carriers, market participants told BBG. Another consequence is that prices of naphtha, a must-have feedstock that Asian petrochemical plants buy in large volumes from Europe, have soared, per data from the Baltic Exchange in London.

Due to rising demand, prices for VLCCs carrying crude from the Middle East to China rose to $1,371 a day, registering a profit for only the second day in over 7 weeks, according to Baltic Exchange data. It’s the highest since Jan. 27. The canal blockage “is having more of an impact on the Suezmax sector where rates are starting to rise and where a lengthy blockage will more quickly affect vessel supply balances,” Claire Grierson, senior director of tanker research at SSY, told Bloomberg.

The congestion is hitting bulk carriers that ship products from wheat to iron ore. Just shy of 40 of these bulk ships are stuck in the Suez traffic jam, according to Peter Sand, chief shipping analyst at trade group BIMCO.

“Unless the situation is resolved very quickly we will soon see ships sailing south of Africa,” Sand said. “Oil tanker rates are terribly low at the moment so that’s where there’s most upside. Then some upside for dry bulk.”

“In the past 24 hours, we have received several requests for price options to divert vessels,” he said. “New arbitrage trade flows could emerge, but this all depends on how long the Suez Canal will be blocked.”

The Suez is responsible for 2MM barrels a day of oil flows, according to Braemar estimates shared with Bloomberg.

Bottom line: as we mentioned earlier, higher shipping costs will inevitably stoke higher inflation, which could create problems for Fed Chairman Jerome Powell and his expectation that rising inflationary pressures will be “transient.”

As shipping companies grapple with the possibility that the Suez canal might be blocked to all traffic for a week or more, Maersk, the world’s biggest and most important shipping and supply-chain management company, is reportedly planning to divert ships around the southern tip of Africa.

Taking the long way around could add as much as 6,000 miles to some of the world’s most important shipping routes – those that carry goods and commodities from Asia to the West – which could force shippers to shoulder enormous additional costs – costs that must at some point be passed along to the end-consumer.

To be sure, the company is also reportedly considering air routes as a potential for substitution, Bloomberg reports.

“Regarding the possible alternatives, we are looking at all of them, including the Cape of Good Hope but also many others, for example air solutions for critical and time-sensitive cargo,” Maersk said in a statement. “No concrete decision has been taken yet. It will depend on how long the Suez Canal remains impassable.

And Maersk isn’t alone: Hapag-Lloyd, the major German international shipper, is also considering rerouting ships around the Cape of Good Hope (the southern tip of the African Continent).

Owners of supertankers hauling 2MM-barrel cargoes had been losing money for weeks on the industry’s benchmark trade route due to of OPEC+ withholding millions of barrels of supply from the global market. However, on Wednesday the carriers nudged back to profitability, while rates for smaller crude-carrying ships are climbing too, and earnings on oil-product vessels sailing from the Middle East to Europe have also jumped. But re-routing could change all of that.

Earlier, the Maersk Denver, one of the ships stuck behind the “Ever Given” (the ship that’s stuck in the canal), managed to back out of the canal. It’s now back in the Red Sea.

Five Hapag-Lloyd ships have also been affected by the Suez Canal blockage.

In an emailed newsletter to employees, management advised “we are presently looking into possible vessel diversions around Cape of Good Hope.” As far as the Ever Given’s situation goes, the firm said it had no special insight into the situation, and must plan accordingly. “We don´t have any clear indication when the vessel will be refloated again,” the firm said, referring to the Ever Given, the container ship blocking the Suez Canal

The five Hapag-Lloyd ships affected are:

Meanwhile, the queue of ships waiting at the Suez Canal now stands at 237, compared with 185 Wednesday and 100 at the start of the blockage. Such a backlog could take days to clear on its own, even if the shipping lanes reopened immediately.

Shares of Maersk and Hapag-Lloyd tumbled Thursday as the crisis entered its third day, moving lower on reports of re-routing traffic. Maersk shares slide as much as 3.3% after Wednesday’s 1.6% fall, while Hapag-Lloyd was down as much as 5.4%, adding to Wednesday’s 3.8% drop.

As exporters scramble to implement contingency plans, economists and market strategists are trying to suss out how this blockage might impact inflationary pressures, and market prices. While others are contemplating worst-case scenarios, as well as why the world wasn’t better prepared for something like this. After all, while there isn’t a known political dimension to this dispute, the Suez isn’t the only major chokepoint for global trade. In a note entitled “Central Banks Are Going To Need A Bigger Boat,” Rabobank’s Michael Every contemplates all this, and more.

“It seems an appropriate title today given one wonders who said that about the vessel still blocking the Suez Canal: was it trying to do a U-turn? If one ever wanted to imagine what blockading the Suez Canal looked like physically, and what it would deliver to already-strained global supply chains economically, well, enjoy. This obviously risks exacerbating the cost-push inflation pressures we are already seeing in many sectors. It may also briefly refocus analysts’ attention on just how vulnerable global trade is to blockages in key logistical bottlenecks, such as the South China Sea. Just imagine if it, or the Straits of Malacca, or the Straits of Hormuz were to be subject to geopolitical disruption. It’s a good job nobody is talking about any of these things ever happening, isn’t it?”

As Maersk and others order ships to re-route around Africa, the world will be watching to see how global supply chains are impacted.

It’s estimated that 90% of the world’s trade is transported by sea. As consumers, we rarely give much thought to how the things we buy make their way across the planet and into our homes.

That is, until an incident like the recent grounding of a huge container ship, the Ever Given, in the Suez Canal exposes the weaknesses in this global system.

The container ship ran aground in the Suez Canal on March 23, blocking the passage of other ships and causing a traffic jam for cargo vessels. EPA-EFE/Media Suez Canal Head Office

High winds have been blamed for the container ship blocking the narrow strait, which serves as a trade artery that connects the Mediterranean and the Red Sea. But with shipping so heavily reliant on such narrow channels, the potential for these incidents is ever-present.

As researchers of maritime security, we often simulate incidents like the Ever Given grounding to understand the probable long and short-term consequences. In fact, the recent event is near identical to something we have been discussing for the last month, as it represents an almost worst-case scenario for the Suez Canal and for knock-on effects on global trade.

The Suez Canal is the gateway for the movement of goods between Europe and Asia, and it was responsible for the transit of over 19,000 ships in 2019, equating to nearly 1.25 billion tonnes of cargo. This is thought to represent around 13% of world trade so any blockage is likely to have a significant impact. 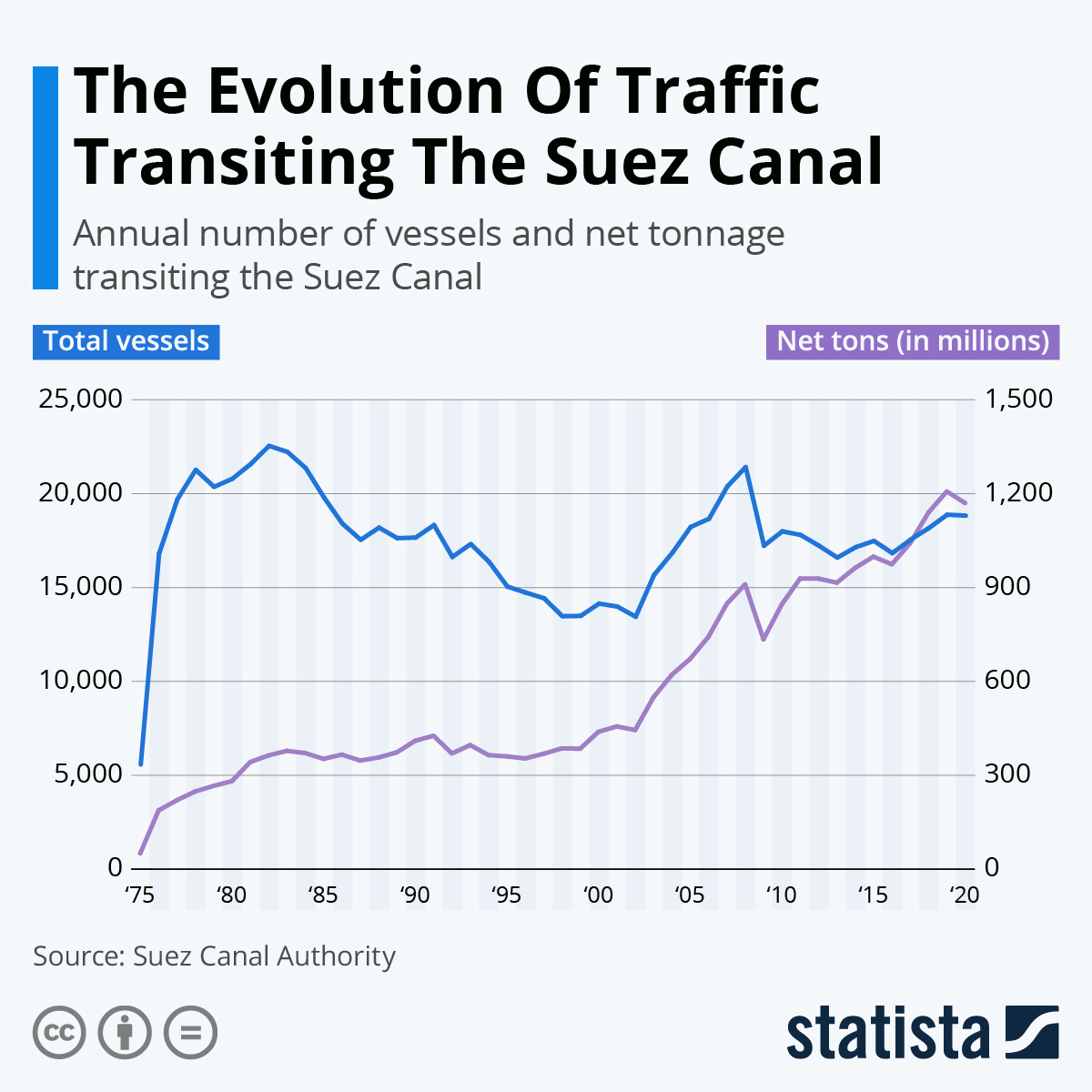 The Suez Canal Authority started expanding the strait in 2014 to raise its daily capacity from 49 vessels at present to 97 by 2023.

This gives an indication of how many ships are likely to be affected by the current situation.

There are reports that the incident has already halted the passage of ten crude tankers carrying 13 million barrels of oil, and that any ships rerouted will have 15 days added to their voyage.

The severity of the incident is because of the dimensions of the vessels using the canal. The Ever Given is 400 metres long, 59 metres at its widest point and 16 metres deep below the waterline. This makes it one of the largest container ships in the world, capable of carrying over 18,000 containers. Depending on the severity of the grounding, the salvage and re-floating of this type of ship is a complex operation, requiring specialist equipment and potentially a lot of time.

While the exact number of container ships of this size transiting the canal is unknown, container vessels account for almost a third of all canal traffic. Their depth and girth make for difficult navigation within the canal. When operating within such tight margins, ships of this size have to maintain a certain speed to keep their steering effective.

With the capacity to carry over 150,000 tonnes of cargo, these ships cannot stop suddenly. If something does go wrong, crews have very little time to react before the ship runs aground.

The Suez Canal was completed in 1869 – long before modern container ships existed. Mr_Karesuando/Shutterstock

This makes a blockage of this type almost inevitable, especially considering that the length of these ships far exceeds the width of the canal. But what makes this incident particularly disruptive is the location of the grounding. Since the canal was expanded, the Mediterranean end of the Canal now has two channels for ships to take, allowing seamless transiting even if one channel is blocked.

But, in its current location at the Suez end of the Canal, the Ever Given is blocking the only channel for ships to pass through. As ships travel through the 193km of canal in convoys with tightly scheduled slots, vessels leading these groups can block the channel like this, creating a backlog of ships or even collisions. It’s unclear if the goods being delayed are time-sensitive (for example: medicine or food), but understanding what effects these incidents have on trade can help us pre-empt effective solutions.

Could it have been worse?

We’re also interested in what other factors can influence an event like this. One element is the time of year. Traditionally, in the build-up to Christmas, October and November are busy times for maritime trade. A disruption in the global supply chain during this period would have a far greater impact, and could coincide with difficult weather conditions which would exacerbate things, like visibility-reducing fog.

Another element is the unevenness of the canal’s banks. If the incident had occurred only a few kilometres down towards the seaport of Suez where the strait ends, the ship would have run aground on banks composed of rock, not sand. An impact here might have caused serious damage to the hull, making salvage operations harder.

While not identical to our team’s table-top scenario, the latest incident does highlight that as ships get larger and more complicated, their reliance on narrow shipping routes constructed in an earlier age looks increasingly risky. Today’s blockage will have limited long-term implications, but incidents like it could be triggered maliciously, causing targeted or widespread impacts on global and local trade. We need to be more aware of these weaknesses as our world becomes more connected.