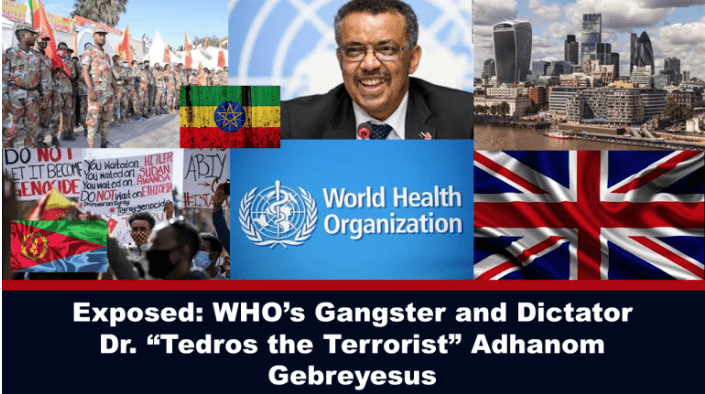 The head of the World Health Organisation, Dr. Tedros Adhanom Gebreyesus, was a senior capo for the Tigray Peoples Liberation Front (“TPLF”) gangster mafia that ruled Ethiopia from 1991-2018. During that time, he served as Health Minister and Foreign Minister, cementing his credentials as a member of the inner circle of what was one of if not the most corrupt, brutal and genocidal regimes to set foot on this planet in the past 30 years.

The Gangster Head of the WHO

By Thomas Mountain, republished from The Nigerian Voice, 15 April 2020

From 2007 to Ethiopia’s Peaceful Revolution in 2018 Dr. Tedros was complicit in the TPLF’s crime of genocide against the Somali people of the Ogaden with the genocidal blockade of food and medicine to the region. He was part of expelling the Red Cross and Doctors Without Borders from the Ogaden during a series of Cholera outbreaks and in helping deny medicine to the Somali Ogadenis he oversaw the deaths of untold thousands during a series of historical droughts, famines and epidemics.

Dr. Tedros did not just cover up cholera epidemics, he was complicit in a medical blockade to those affected.

And this gangster is today the head of the WHO? How the hell did this happen? Deja Vu Anthony Lake, the CIA and UNICEF?

In 2016 a revolutionary situation was developing in Ethiopia with the TPLF mafia’s days clearly numbered. Dr. Tedros read the writing on the wall and made himself “available” to serve the interests of Pax Americana at the UN. Being the USA is the major contributor to the WHO his vetting for its head by the CIA was a must. Having demonstrated suitability for the job by overseeing genocide made him eminently qualified and during the early days of the Trump Regime in 2017, he made his move from the sinking ship in Addis Ababa to Switzerland and the fat salaries of the UN.

Today he finds himself on the hot seat with a 100-year global flu pandemic raging. For almost three years he remained quiet about the almost total lack of preparation at the WHO for what numerous panels had warned was inevitable, a highly contagious and deadly virus quickly spreading across the world. Where were the stockpiles of protective supplies the public health professionals called for, repeatedly? Where were the stockpiles of medical equipment? Where were the testing kits the esteemed Doctors urgently spoke of?

Where was Dr. Tedros? Holding press conferences expressing the urgency of the matter? Raising a hue and cry about the potential for disaster predicted by his professional colleagues?

Dr. Tedros was missing in action to put it simply, his silence was deafening, just as was his silence when his “comrades” in the once Marxist Leninist Hoxha-ite TPLF mafia in Ethiopia blockaded medicine during a cholera epidemic.

No preparation leads to crisis management and Dr. Adhanom “admitting mistakes were made” by this failure of leadership in the face of a global crisis. But then what should we expect from someone who made his bones complicit in mass murder in the Ogaden?

Why Does Britain Support The TPLF?

“The record is clear,” Mountain tweeted last week, “listen to this interview where I described how TPLF terrorists almost successful coup blocked by Eritrean fighters. Didn’t the Ethiopian “experts” supposedly exposing this bother to watch BroMakonnen show? Or listen to Voice of Eritrea?”

In his tweet, Mountain linked an interview with Menelik Television 2 about the political crisis in the Horn of Africa and the strategic blunder of the USA.  During this interview Mountain said:

[timestamp 49:15] “I think one of the key players in all this is, I call him ‘Tedros the Terrorist’, Tedros Adhanom Gebreyesus, the Head of the WHO. He is the last big player from the TPLF. He was Minister of Health. He was Foreign Minister. He was very close to Meles Zenawi [TPLF’s leader] and now he’s the head of the WHO – World Health Organisation.

“Now, the major contributor to the World Health Organisation is the United States. In other words, the CIA chooses who’s head of the WHO and they chose ‘Tedros the Terrorist’. Why? Because he played an active role in the genocide in the Ogaden.

“Now, in the Ogaden from the end of 2007, until Abiy [Abiy Ahmed Ali prime minister of Ethiopia] came to power in 2018, there was a complete food and medical aid blockade. The area, that region was surrounded and no food and medicine were allowed in the country. And this is during a series of droughts and famines that was unprecedented in the history of the Ogaden. People were starving and not only were they blocking food and medical aid they were actually sending death squads in there for counterinsurgency and making life even worse.”

[timestamp 1:00:12] “[Tedros is] a big-time criminal. And one of the things that my research has uncovered was where did all this money go that TPLF stole? Because they stole, I mean they received something 30 billion dollars or maybe more, 40 billion, maybe 50 billion … where did it all go? … We know it didn’t go to Europe … the only other place it could have gone to was … the City of London banks.”

[Timestamp 1:03:52] “Africa has been looted to hundreds of billions of dollars and where did it go? Most or all, they went to the City of London. That’s what’s made these big banks rich. So, Tedros Adhanom Gebreyesus must have a huge bank account sitting side by side with Meles Zenawi’s wife and his cronies in the City of London. And that’s why to this day the British continue to support the TPLF. Because they’ve bankrolled all their billions, ill-gotten billions, in the British banks”

Thomas C. Mountain is a journalist, historian and educator.  He has been living and reporting from Eritrea since 2006. You can follow Mountain on Twitter HERE.