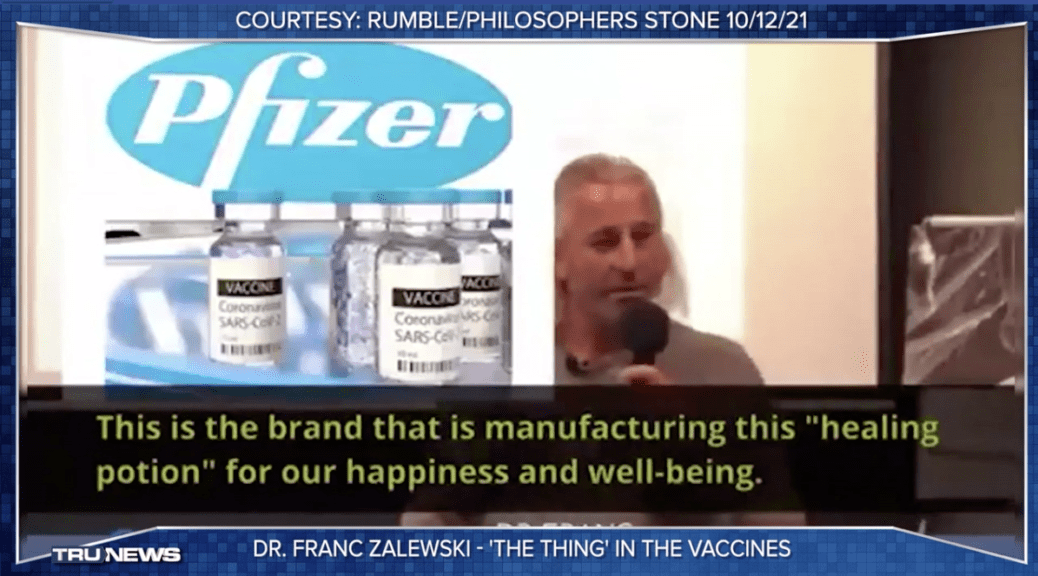 I have been paying scant attention to TruNews in the last week but I snapped to attention for possibly the most important show of the year.

“The virus was made for the vaccine.” 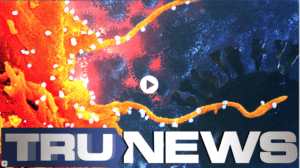 Today on TRUNEWS, Rick and the team delve into the recent videos being released showing products in the so-called vaccine operating systems growing tentacles. Legitimate research confirms that the COVID virus does have dendrites meant to invade cells and to change the way cells operate. 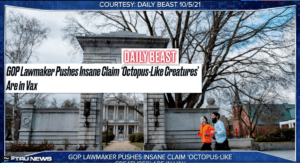 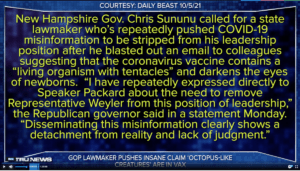 Here, Dr Madej explains what she saw under the microscope

Here is a Polish scientist explaining the same thing.

DR. FRANC ZALEWSKI – ‘THE THING’ IN THE VACCINES

He says this an aluminium-form live body- something that does not exist in nature.

The swabs, he says, are used for collecting DNA and consist of aluminum, barium and carbon

Not everyone has the ‘eggs’ inside them.

Two of the three injections have saline solution in them.  The third has ‘THE THING’

If you are slightly sceptical then watch this… from 5 years ago. 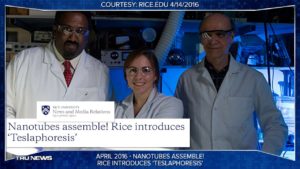 They describe remote signals that lead nanoparticles to self-assemble.

Could the signal come from 5G? 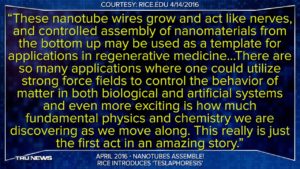 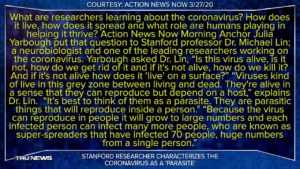 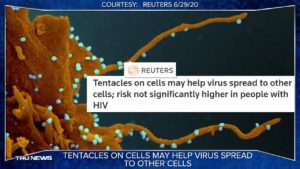 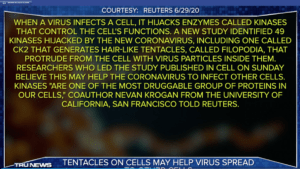 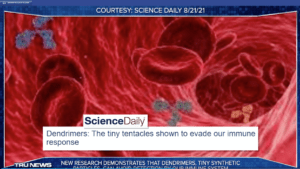 Tiny synthetic particles known as dendrimers have been shown to avoid detection by our immune system and so could be used to develop a new system to deliver drugs into the body without triggering a reaction.

The new research led by Professor Moein Moghimi, Professor of Pharmaceutics and Nanomedicine at the School of Pharmacy, Newcastle University, UK, in collaboration with international colleagues is published in Nature Communications alongside an accompanying blog.

The dendrimer is a chemically-created molecule with tentacles branching out in a highly-symmetrical structure around a central core. The research describes how dendrimer tentacles arranged incredibly closely to each other — less than one nanometer apart — avoided detection by the complement system, part of our immune system.

CPR can sense surface patterns that are regularly repeated so close to each other, for instance in 2-15 nanometer ranges — a distance, which is at least 5000 times thinner than the thickness of a typical sheet of paper….

At a nanoscale level, the team grew tiny particles known as dendrimers which are shaped like trees with many branches — or tiny tentacles. The number of tentacles exponentially increases with dendrimer size and the tentacles are positioned less than 1 nanometer from each other. The ends of tentacles are where regular patterns appear. Depending on chemical structure of these patterns, they found that these dendrimers could escape detection by the CPR radar. 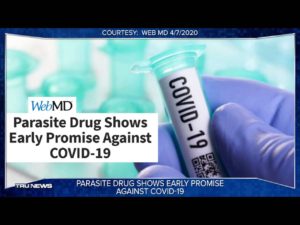 Wuhan and US scientists were planning to release enhanced airborne coronavirus particles into Chinese bat populations to inoculate them against diseases that could jump to humans, leaked grant proposals dating from 2018 show.

STANFORD RESEARCHER CHARACTERIZES THE CORONAVIRUS AS A ‘PARASITE’ 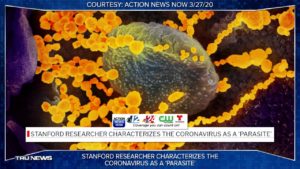 An inexpensive drug used to treat parasitic infections killed the coronavirus that causes COVID-19 in less than 48 hours in a laboratory setting, Australian researchers say.

The drug, ivermectin, has been used widely used for decades. It was introduced as a veterinary drug in the 1970s. Doctors also prescribe it to treat head lice, scabies, and other infections caused by parasites. According to a report published online in the journal Antiviral Research, the drug quickly prevented replication of SARS-CoV-2, the virus that causes COVID-19. The study has been peer-reviewed and accepted for publication, although it is not yet a “definitive” version of record.

COVID is a man-made parasite 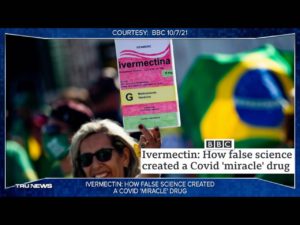 Rick Wiles turns his attention to Morgellons Disease which has been described as false. Most stuff has been disappeared from the internet but he cited this article from April, 2015

Joni Mitchell and the mystery of Morgellons disease 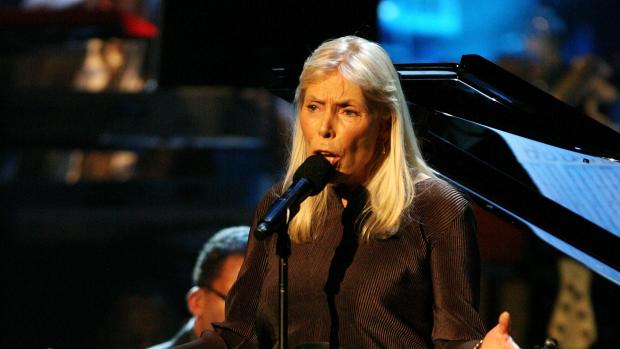 The hospitalization of music legend Joni Mitchell on Tuesday night shocked and worried millions of fans. Mitchell was found unconscious at her home and rushed to the emergency room, but the nature of her illness is still unconfirmed. The incident revived concern about an odd and mysterious health condition Mitchell has spoken about suffering in the past. It is known as Morgellons disease, and it reportedly affects some 13,000 people in the U.S. It’s in fact so mysterious and odd that the consensus in the majority of the medical community is that Morgellons doesn’t actually exist.

People who complain of Morgellons disease cite a number of symptoms, but the primary issue is the presence of colorful fibers or “filaments” that sprout from lesions or appear under the skin. Symptoms of Morgellons — named from a 1674 medical paper that described similar symptoms — also include sensations of itching, biting or crawling on the skin, as well as chronic fatigue, joint pain, difficulty with memory and thinking, mood changes and some neurological problems.

In 2010, Mitchell told a reporter at the Los Angeles Times that she has a “weird, incurable disease that seems like it’s from outer space.” She said the condition is the reason why she often hides from the public eye. Mitchell described seeing “fibers in a variety of colors protrude out of my skin like mushrooms after a rainstorm: they cannot be forensically identified as animal, vegetable or mineral.”

“Morgellons is a slow, unpredictable killer — a terrorist disease: it will blow up one of your organs, leaving you in bed for a year,” she continued. “Morgellons is always diagnosed as ‘delusion of parasites,’ and they send you to a psychiatrist. I’m actually trying to get out of the music business to battle for Morgellons sufferers to receive the credibility that’s owed to them.”

Over the years, the U.S. Centers for Disease Control and Prevention has made efforts to respond to the Morgellons community by conducting investigations, and even at one point enlisting the U.S. Armed Forces Institute of Pathology and the American Academy of Dermatology to help with research. A handful of studies suggest Morgellons is simply an indication that a person may need to seek treatment for depression, skin-picking disorder, anxiety and even substance abuse.

One paper published in 2012 in the respected, peer-reviewed journal PloS One — “Clinical, Epidemiologic, Histopathologic and Molecular Features of an Unexplained Dermopathy” — identified 115 patients from Kaiser Permanente in California who reported symptoms of the condition. The median age of the Morgellons sufferers was 52, though ages ranged from 17 to 93 years old. A majority were female and white. More than half reported overall fair or poor health, while 77 percent said they suffered from chronic fatigue. The researchers identified cognitive deficiencies in 59 percent of the patients and “clinically significant” somatic complaints — a fancy term for hypochondria — in 63 percent.

Physical symptoms also appeared to be questionable to the researchers. Half of hair samples analyzed in the study were found to have drug traces and half the patients had sun damage to skin.

In the study, patients with skin lesions were found to have some type of bug bite (such as fleas, bed bugs or mosquitoes) or self-inflicted wounds from chronic skin picking. The researchers did not collect any specimens that could be categorized as parasites; the main substance identified in samples of skin fibers was cellulose, most likely particles from cotton clothing.

At the completion of the $600,000 study, the researchers still weren’t convinced: “This unexplained dermopathy was rare among this population of Northern California residents, but associated with significantly reduced health-related quality of life. No common underlying medical condition or infectious source was identified, similar to more commonly recognized conditions such as delusional infestation,” they wrote at the conclusion of their study.

Cindy Casey Holman, a registered nurse and the director of the Charles E. Holman Morgellons Disease Foundation, says the study was flawed and that the bacteria Borrelia burgdorferi (Bb) has been cultured from Morgellons skin lesions.

“A serious and often deadly systemic infection is present in Morgellons samples. Still patients are being prescribed antipsychotics while the infection goes undetected and untreated,” Holman told CBS News in an email. “Clouding the picture is that some patients do exhibit psychiatric manifestations. But spirochetal infections, such as Borrelia burgdorferi, are well known to affect the central nervous system and cause psychiatric symptoms. Yet the infection is ignored while dermatologists offer dangerous antipsychotics as the only treatment.”

Because the medical community is skeptical of Morgellons, most people self-diagnose with the help of Dr. Google. As a result, there is an active online community of Morgellons sufferers online.

Many post photos of specimens on the Morgellons Research and Support Network‘s Facebook page and other social media.

Some sufferers report that their Morgellons symptoms disappeared after taking a course of antibiotics typically used to treat infections from bacteria or protozoa. But doctors could argue, that could be explained by another great mystery: The placebo effect.

Morgellons Found to Be Closely Linked With Lyme Disease

Morgellons disease has been a puzzle to practitioners for many years. Sufferers exhibit colorful filaments that protrude from their skin or nestle directly underneath it, resembling textile fibers in their texture and hue. Frequently, this unusual presentation led physicians to doubt that the filaments could originate from inside the skin and sufferers were traditionally thought to be delusional. Now, researchers associated with the International Lyme and Associated Diseases Society (ILADS) have examined the results of several recent studies and concluded that not only do Morgellons filaments originate inside the skin, but the disorder is also closely linked to Lyme disease 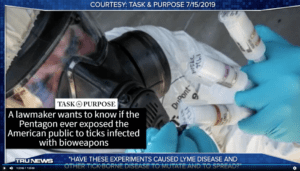 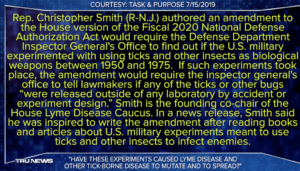