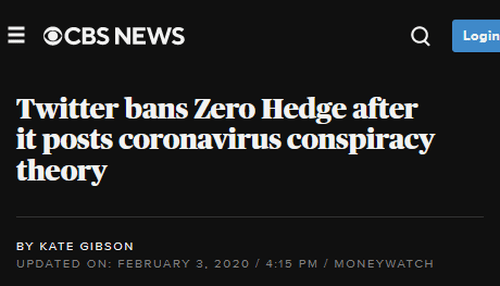 So of course, once the lab-leak theory began to circulate in January, 2020, China’s ‘investments’ in the United States paid off, and the entire liberal media industrial complex furiously peddled the ‘natural origin’ theory, while boldly proclaiming the lab origin hypothesis a ‘debunked conspiracy theory.’

That was until the last two weeks, starting with Sen. Rand Paul (R-KY) shredding Anthony Fauci over the NIH funding US research within the Wuhan lab, followed by a Wall Street Journal report that three WIV lab workers were hospitalized in December 2019 with COVID-19 symptoms.

And with that, the lab-leak hypothesis was legitimized almost overnight – sending liberal outlets scrambling to quietly append their previous reporting. This flood of hypocrisy was compiled into an epic Twitter thread by journalist Drew Holden:

Expect no apologies, of course.