I prefer specific reports like below to crap like this. Emissions have been going up but CO2 levels continue to rise.

A strong temperature wave is developing in the Arctic circle, with surface temperatures more than 20°C above the long-term average in the Siberian sector.

The Arctic region is entirely an ocean and has no large-scale landmass. It is the smallest and shallowest of the world’s five major oceans and is also the coldest. It is also the only ocean smaller than the largest country in the world by area, Russia.

The image below shows the Arctic ocean water-free, revealing a very complex underwater terrain and marks the Arctic regions. The current warming wave will mainly move over the eastern regions, the Kara Sea, Siberian Sea, and the Laptev Sea. 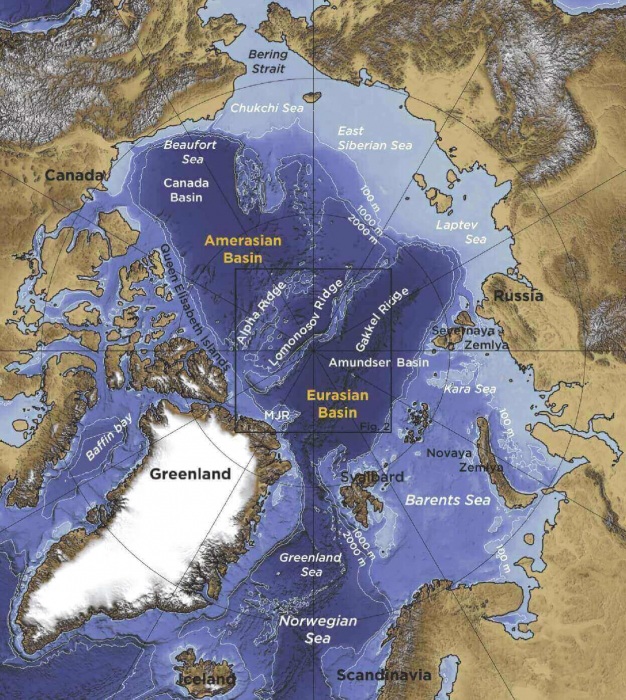 The atmosphere is constantly in motion and always trying to achieve a state of perfect balance or equilibrium. It is being “imbalanced” by the large temperature differences around the world, from the Equator to the Polar region.

These temperature differences can cause large pressure variations in the atmosphere. This can result in strong pressure systems around the world, where the wind is the main force that is trying to correct these imbalances in pressure.

We produced a pressure anomaly forecast over the Polar circle and North America for Tuesday, January 5th. It reveals a low-pressure system over the North Pole, pushing against a very large and strong high-pressure system sitting over Siberia. 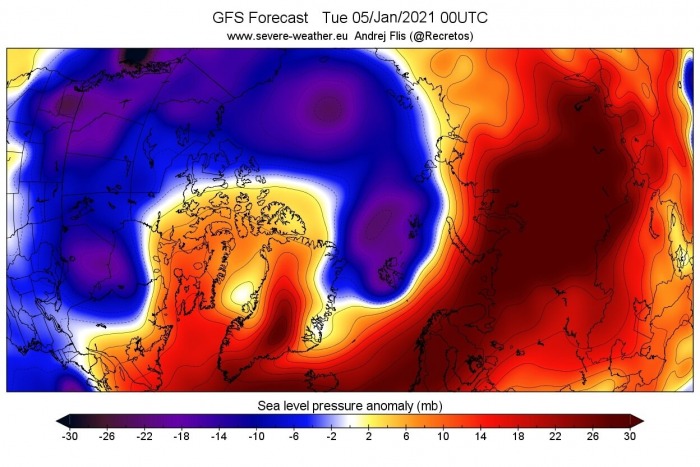 As we now know, the wind is the main force that is trying to correct the imbalance in pressure. The image below shows the wind analysis for January 3rd. We can see a large wind corridor between the two large systems over the North Pole and Siberia. It extends all the way back into the far North Atlantic ocean. 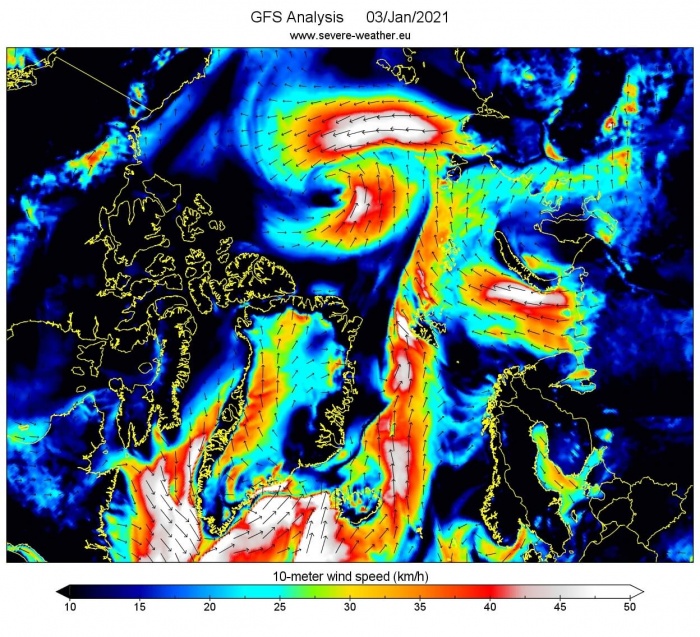 Such strong and persistent winds can transport a large mass of air in a very short time. In most cases, the air mass is moving too fast to adjust its temperature to the surrounding, meaning losing or gaining heat.

Simplified, this means that large masses of air can be quickly replaced or transported without much immediate change in their temperature or other properties. This is why we can see positive temperatures in the North Pole or Arctic cold air down in the mid-latitudes.

Such rapid transport of an airmass that retains its properties (temperature, humidity,…) is commonly called an advection.

Now that we know what an advection is, we can witness a very intense example, currently ongoing in the Polar regions. Driven by the pressure differences and winds, warmer air is being advected into the Polar circle.

Below we have an image that shows the wind direction and temperature anomaly over the Northern Hemisphere, from late December to early January.

We can nicely see an active warm advection in the Polar circle, driven by southerly winds, transporting warmer air from the south. At the same time, colder air advection is seen over the western United States and western Europe, driven by colder northerly winds. The graphic is by Polar Portal. 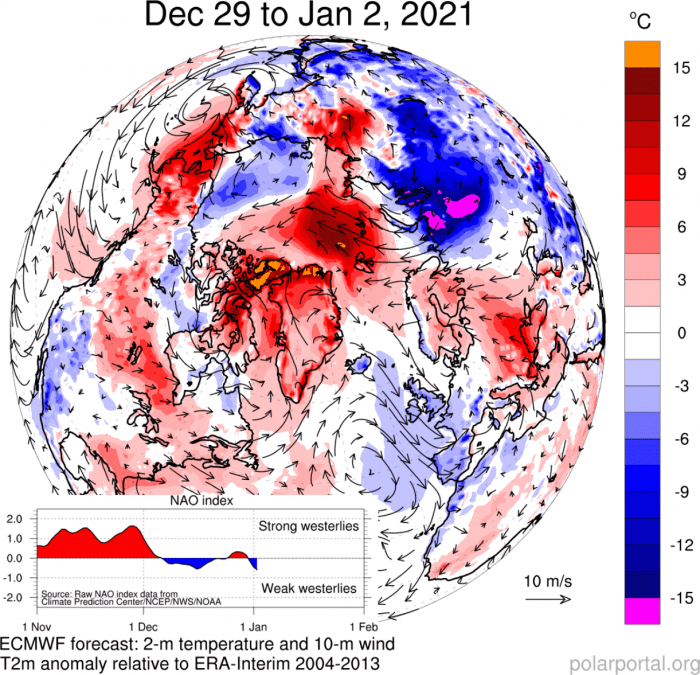 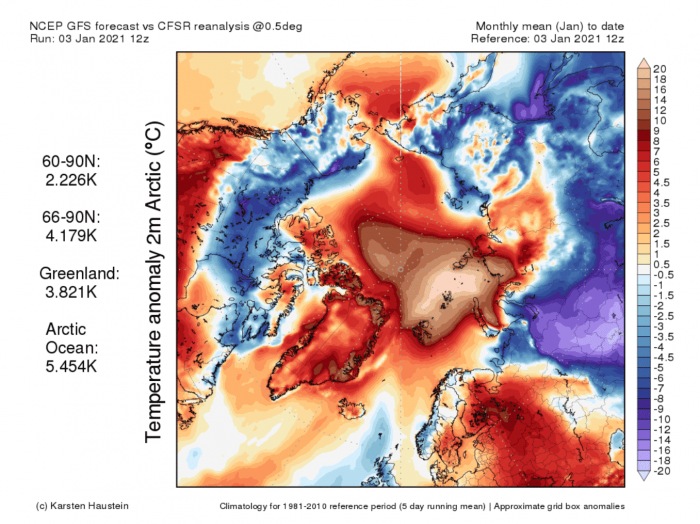 Temperature analysis for January 3rd, shows the large-scale strong positive anomalies, along with streamlines that show the air transport. We can see that the air is being transported from the North Atlantic, Scandinavia, and eastern Europe. 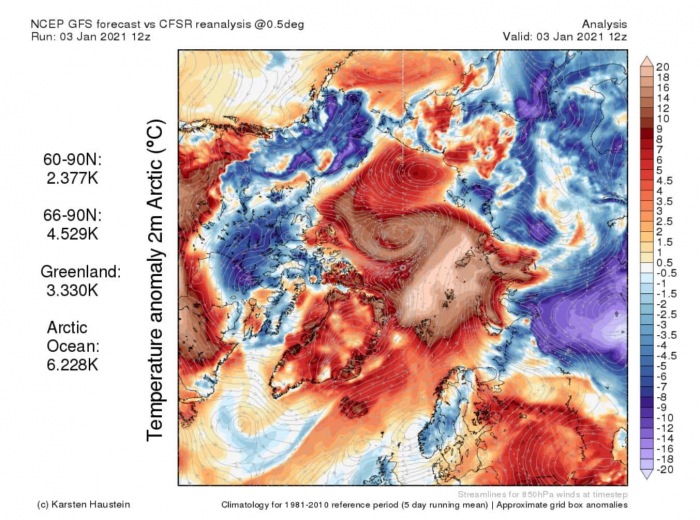 We produced a high-resolution video below, which shows the temperature anomaly forecast. It nicely reveals the motion and development of this strong warming wave as it moves across the Arctic region.

THE GATES OF NORTH ATLANTIC

Before going further into the development of this “heatwave”, let’s take a look at the region which helps to drive such a strong temperature wave. 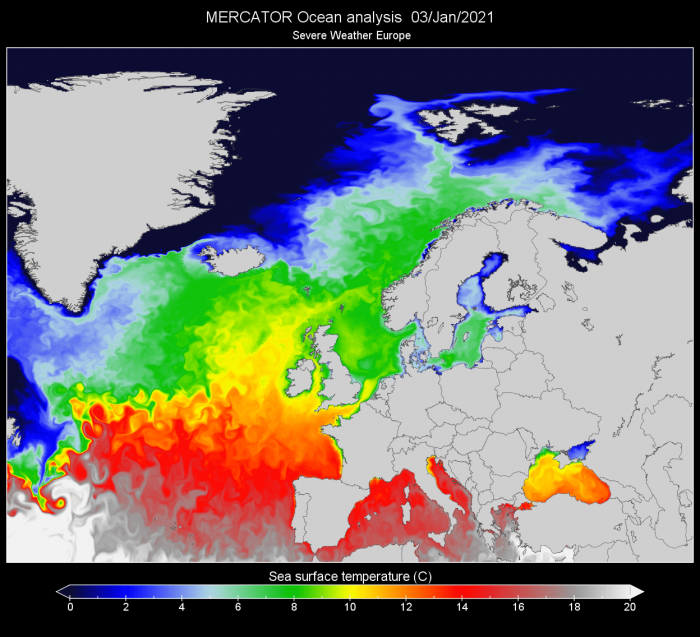 Ocean temperature anomaly analysis actually shows that the temperatures in the Norwegian Sea and Greenland sea are currently warmer than the long-term average. 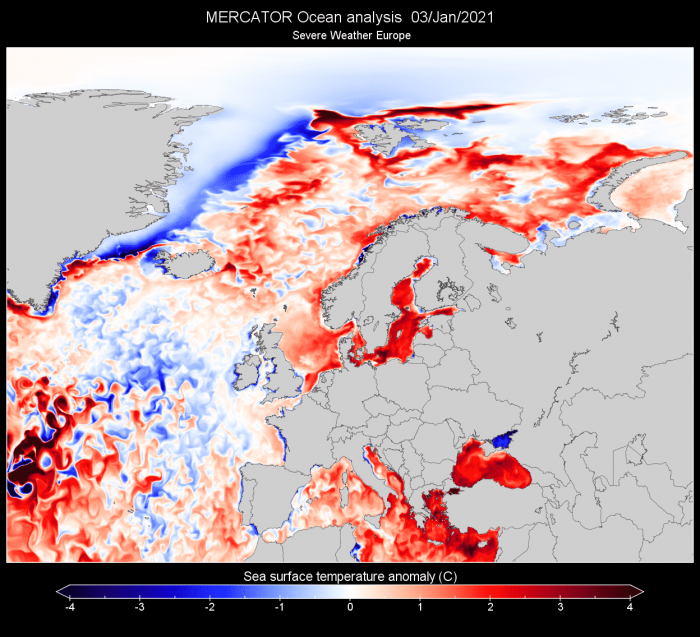 But positive ocean temperatures do not cause +20°C anomalies over the Arctic on their own. Instead, they help to keep the surface air temperatures relatively warmer for a longer period of time before reaching the Arctic.

The main reason the ocean stays so warm in winter and positive water temperatures even reach the Arctic, is the AMOC. Also known as the Atlantic Meridional Overturning Circulation.

This is the main oceanic circulation system in the North Atlantic. It is quite famous since it is well known that this ocean transport system enables milder weather conditions for northwest and northern Europe and also for the mainlands. It actively transports warmer ocean waters from the south up towards the north, as seen in the graphic below. 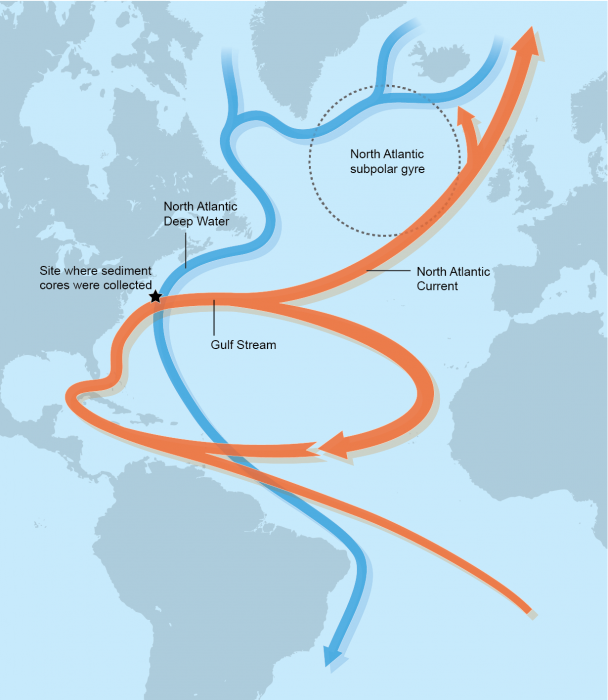 Probably the most well know part of this system is the Gulf Stream. We produced an image below, which shows the actual surface current analysis. The strongest currents can be found in the Gulf Stream, which is moving up along the east coast of the United States. It then turns east, towards the North Atlantic. Then it continues further north, pushing through “The gates” between Iceland and the British isles and reaching the Arctic. 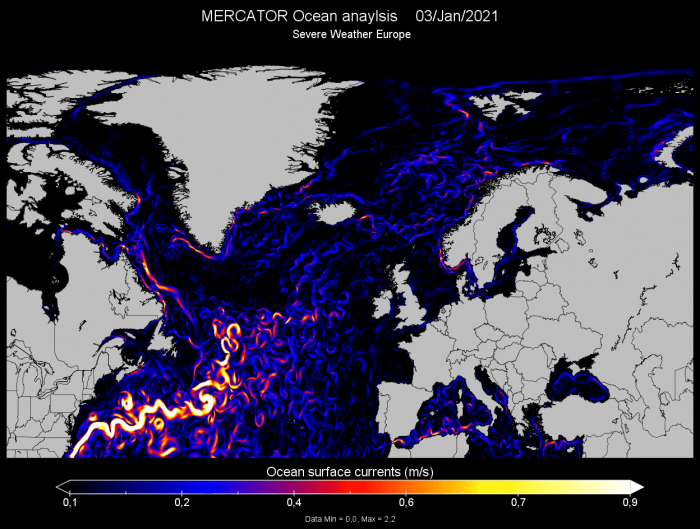 This active water transport system is one of the main reasons that the North polar circle is mainly ice-free in this region. Below we have two images, which show the Arctic sea ice concentration and thickness analysis.

It is nicely seen how the region connecting to the North Atlantic is ice-free, due to the ocean temperatures being too warm to allow freezing. The active ocean currents are constantly delivering relatively warmer waters, preventing thick ice to form. 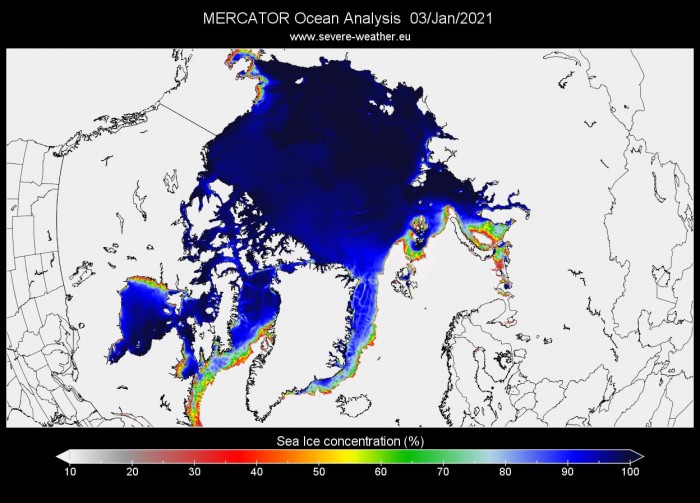 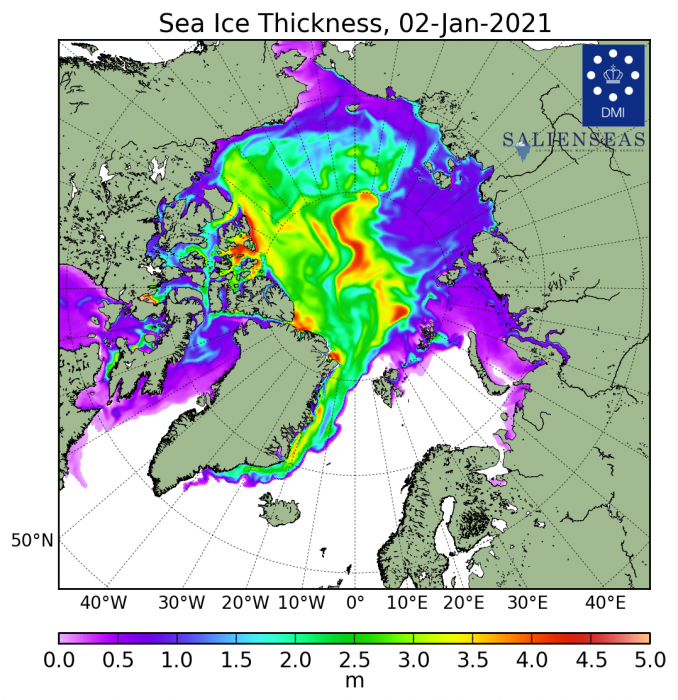 We now know what is behind this wave of warmer temperatures. But this “heatwave” is set to continue in the coming days.

On Monday, the large cyclonic system over the North Pole will blow the warm anomalies further into the Arctic circle, towards the East Siberian Sea. 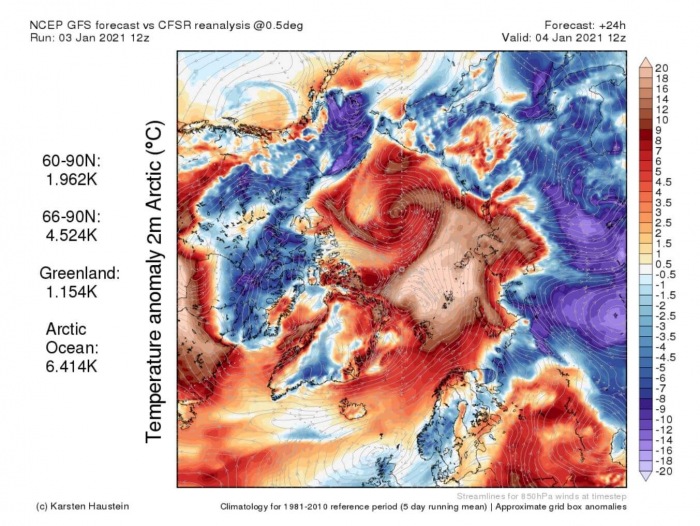 On Tuesday, the strong anomalies will reach further east, enveloping the entire east Arctic Ocean. At this point, the strongest temperature anomalies remain over 20°C above the long-term average. 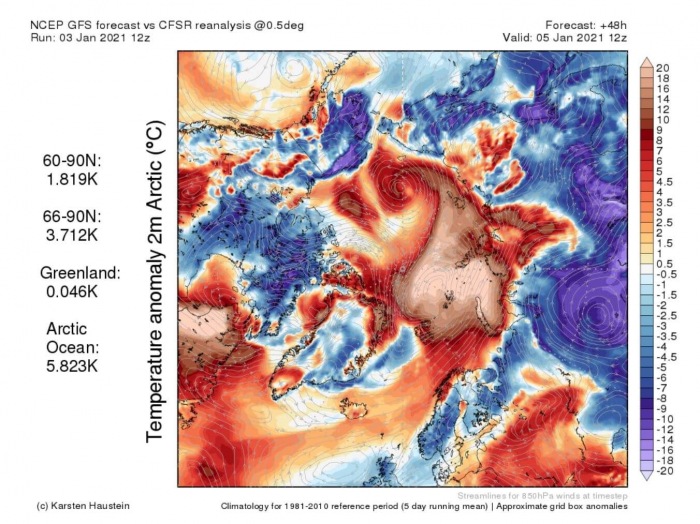 The strongest anomalies will start to move further east on Wednesday, towards the Siberian sea. This will indicate that the peak of the temperature wave is past, as the whole mass of air has moved further east. 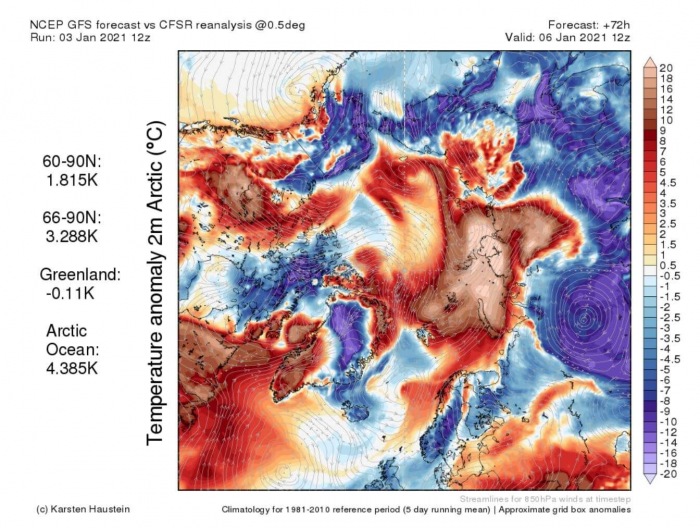 Newton’s third law of motion states that for every action, there is an equal and opposite reaction. Despite not being designed for weather, it still makes us think, that as we see this warming over the Arctic, an opposite, cold reaction is perhaps occurring somewhere else.

That is exactly what we see when we look at the wider temperature picture over Eurasia. The first image below shows the temperature analysis on January 3rd. We can see a large mass of cold air, dropping well below -30°C in north-central Asia and eastern Siberia. Note the airmass of positive temperatures as it is being advected towards the Arctic regions from the Greenland sea. 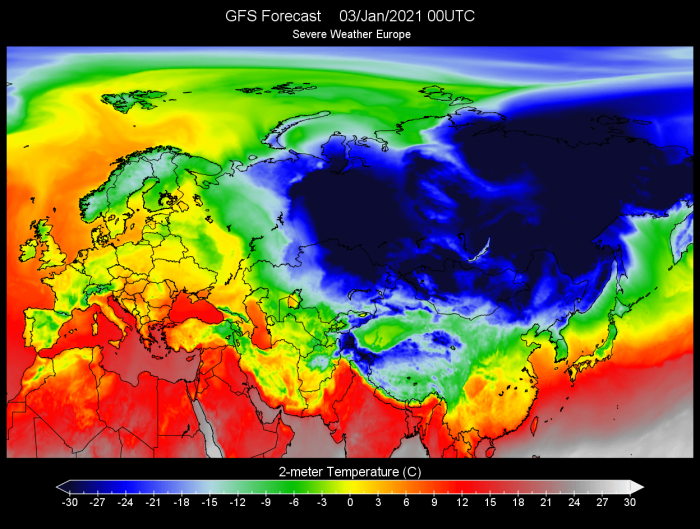 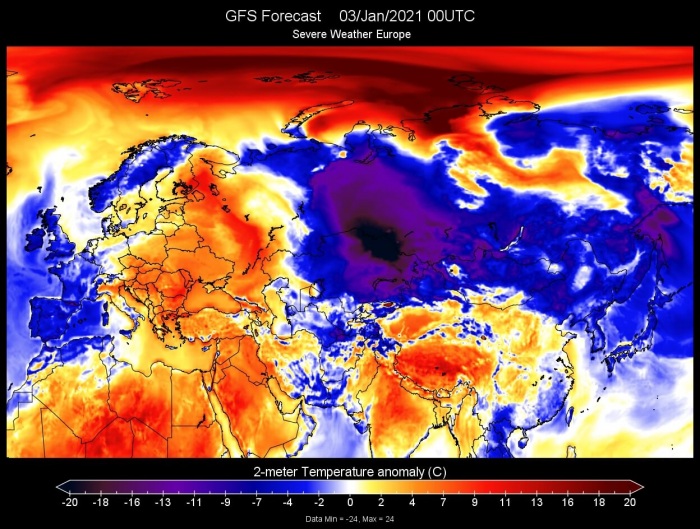 Looking ahead, the temperature forecast shows the colder air to stay over Russia and the central Asian regions. Take note again of the positive temperature airflow over the Arctic Ocean. The “warm tongue” is reaching much further east by mid-week, driven by the strong pressure difference between two systems, acting as a pump. 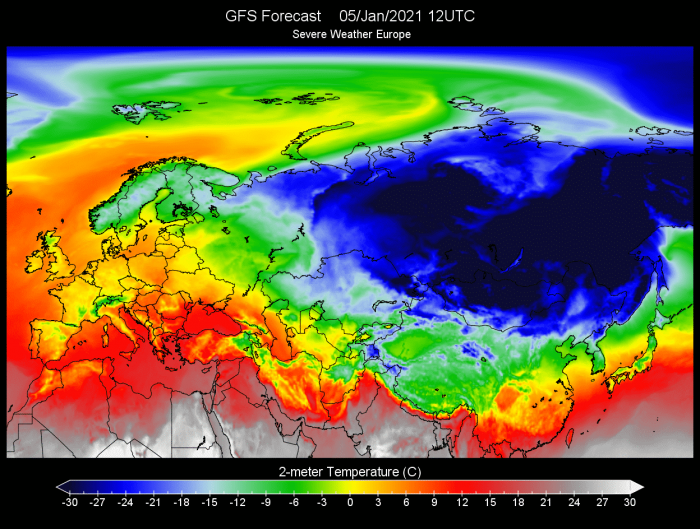 Much colder than normal air will stay over much of central Asia, with strongest anomalies reaching more than 20 degrees lower than normal. 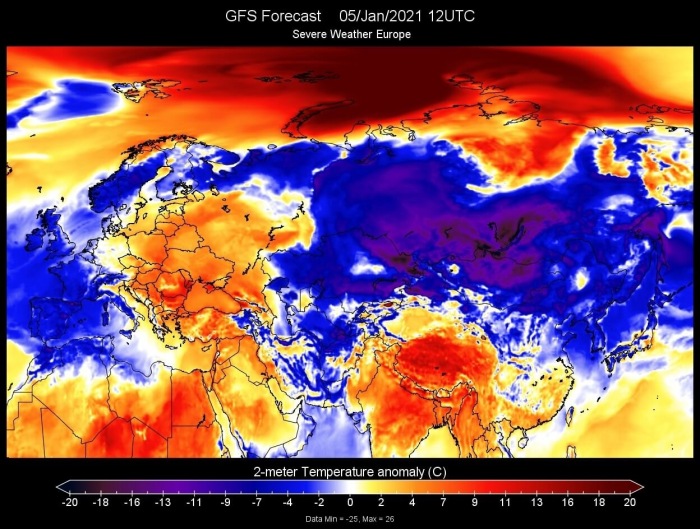 The current Arctic sea ice extent graph does show that we are running quite below normal sea ice numbers. There was a huge deficit of sea ice in October, as the Arctic ocean would not freeze for the first time this late, but November has brought a cooling and a nice recovery with rapid ice growth. 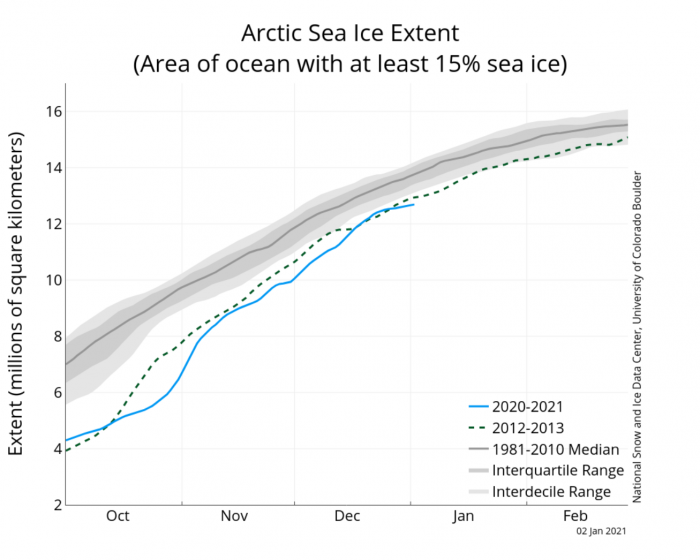 We will keep you updated on the ongoing strong dynamics in the Arctic circle, as it can have important implications for weather development in Europe and in North America.

January 2021 weather forecast – A powerful Greenland blocking High will alter the Polar circulation and the weather, as we now head deeper into Winter