“To give it some context, the Australian fires [are] probably one of the worst or largest animal disasters in history since the ice age,” 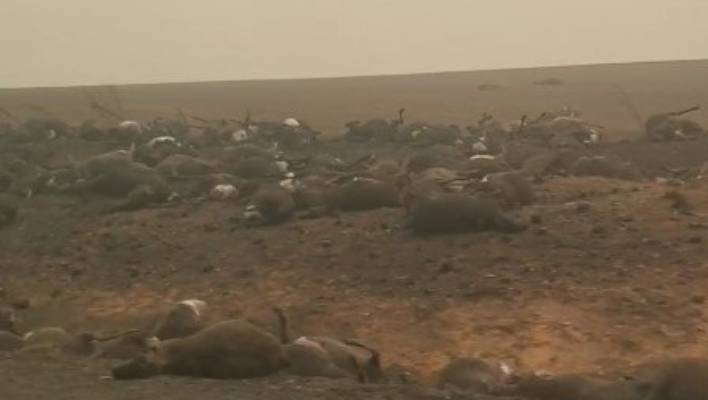 There are fears some of Australia’s native species – like the Kangaroo Island dunnart – may even become extinct because of the fires.

The
trust specialises in animal evacuation in disaster situations and has
been stationed in Bundanoon, south west of Sydney.

Animal
Evac founder Steve Glassey, who is the former chief executive of
Wellington SPCA, told RNZ’s The Weekend the conditions had been
extraordinarily challenging.

“To
give it some context, the Australian fires [are] probably one of the
worst or largest animal disasters in history since the ice age,”
Glassey said.

“There
are so many hundreds of thousands, millions, maybe close to a billion
animals that have perished in this disaster, so it’s an extremely
challenging event for the government of Australia. It’s probably also
the first time that the Australians have had to entertain
international disaster response for animal welfare, so that in itself
is a challenge and the New South Wales government is doing a doing a
great job with the fire response as well.”

Glassey
described finding the animals as like looking for a needle in a
haystack.

“One
of the things that the team is, I think, sort of struggling with is
the fact that we know there are millions of animals out there and we
go out there to rescue animals and we may sort of be able to find or
locate a few and you sort of think ‘well are we making a dent in
this?’ But the reality is that we might not be able to save the
world, but we can hopefully make a difference here.”

On
the first day there, the team – whose trip to Australia was supported
by SAFE New Zealand – was based in the Blue Mountains with a local
animal welfare agent who was licensed to use a tranquilliser gun to
rescue kangaroos trying to flee the area.

Glassey
said the team came across a number of dead kangaroos during their
search, but they were able to help some of the injured.

“Most
of them stayed reasonably sort of still, probably in more of a pain
and panic state.

“It
was like they were actually wanting us to help them rather than just
flee. So by having a bit of safe distance we’ve been able to use
experts with tranquilliser guns to immobilise them, chemically
immobilise, and then we can approach the animal and treat it.”

Images
shared on social media has shown the cost to wildlife the fires have
had, with estimates in the hundreds of millions possibly dead.

Glassey
said the images he had seen looked like a tsunami of animals running
away from the fire front.

“Sometimes
the fires can be so fast those animals are all moving out and are in
a large surge, but if there is boundary fencing they just get caught
up against it and unfortunately perish.”

He
said he had heard stories from people who had fled to the coast and
taken refuge in the sea.

“They
had to endure listening to the koalas that had fled the bush coming
down to the beach line, they heard those koalas were screaming for
help. Most people that were taking safe refuge in the water couldn’t
do anything apart from listen to those cries for help.

“That’s
why we’re here, we’re here to make sure that those koalas and
kangaroos that have been affected by this catastrophic event have
trained experts on the ground to help them. We have exhausted our
financial resources, we would love to send another or larger
contingent of specialists from New Zealand to this event. But we can
only do that if we get the support of New Zealand and other donors to
make that happen.

Glassey
said, at this point, there was no end in sight.

“Look,
it’s absolutely devastating, this is an absolutely catastrophic event
and the fires are still going and they’ll continue to go for days if
not longer.

“That
means that there are still going to be animals that are going to be
impacted. On the bright side, the New South Wales Rural Fire Service
and the partner agencies, they’ve done a fantastic job providing
really good, clear information for people to make sure the animals
have been kept safe. So in terms of companion animals and stock,
they’re not as impacted as what the wildlife are.”

Glassey
said even when the fires were extinguished, the rehabilitation
process for animals would be ongoing.

“That
demand for world-wide rehabilitation is certainly there and it’s been
there for the last few months as the earlier fires stepped up.

“So
yes they’re going to need resources for that and there are
organisations in Australia that are certainly helping with that. The
challenge is … how do we bring those animals out for those
organizations to care when there is potentially a deficiency in
trained responders that have the fire safety training and the
experience to go onto a fire ground with the confidence of the local
authorities.

“The
issue is that there are people that wanted to go in and come over and
deploy that don’t have the training for this. And unfortunately,
that’s creating a secondary disaster for authorities and the sense
that the overwhelming amount of spontaneous volunteers potentially
distract them from being able to help and mobilise legitimate animal
rescue organizations that are accredited.”

Glassey
said the fires in Australia were a timely reminder for New Zealanders
about possibility of it happening here, especially after the Nelson
fires at the start of 2019.

“I
think that unless we start preparing in New Zealand, this could be us
in times to come and it highlights the importance of emergency
planning, funding and co-ordination to make sure there’s resource,
capacity, training and collaboration
within New Zealand to make sure we can be one step ahead of these
kinds of disasters.”