Snowstorms, the Breach of the Arctic Vortex and the Effects of Ice Meltwater on the Oceans 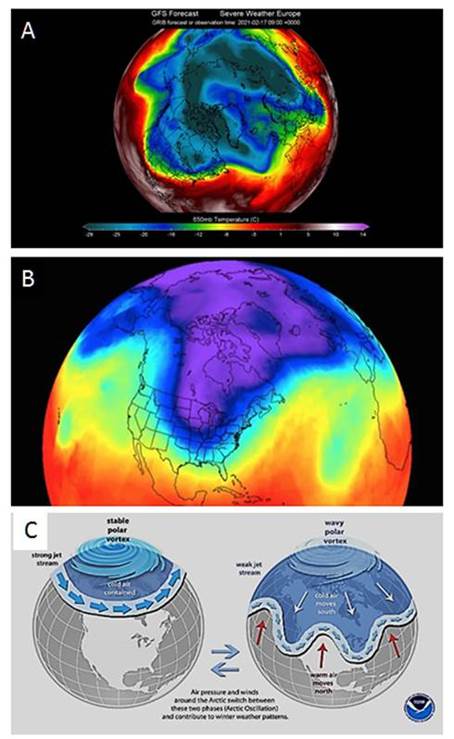 All Global Research articles can be read in 27 languages by activating the “Translate Website” drop down menu on the top banner of our home page (Desktop version).

Warnings by leading climate scientists regarding the high sensitivity of the atmosphere in response to abrupt compositional changes, such as near-doubling of greenhouse gas concentrations, are now manifest: According to Wallace Broecker, (the “father” of climate science) “The paleoclimate record shouts out to us that, far from being self-stabilizing, the Earth’s climate system is an ornery beast which overreacts to even small nudges, and humans have already given the climate a substantial nudge”. As stated by James Zachos, “The Paleocene hot spell should serve as a reminder of the unpredictable nature of climate”.

As snowstorms the “Beast from the East” (2018) and “Storm Darcy” (2021) sweep the northern continents, reaching Britain and as far south as Texas and Greece, those who still question the reality and consequences of global climate change, including in governments, may rejoice as if they have a new argument to question global warming.

However, as indicated by the science, these fronts result from a weakened circum-Arctic jet stream boundary due to decreased temperature polarity between the Arctic Circle and high latitude zones in Europe, Russia and North America. The reduced contrast allows migration of masses of cold Arctic air southward and of tropical air northward across the weakened jet stream boundary, indicating a fundamental shift in the global climate pattern (Figure 1). Figure 1. (A and B) Extensions from the Arctic polar zone into North America and Eutope; (C) weakening of the Arctic jet stream boundary (NOAA)

The weakening of the Arctic boundary is a part of the overall shift of climate zones toward the poles in both hemispheres, documented in detail in Europe (Figure 2). Transient cooling pauses are projected as a result of the flow of cold ice meltwater from Greenland and Antarctica into the oceans, leading to stadial cooling intervals. Figure 2. Migration of climate zones in Europe during 1981-2010 and under +2°C. Faint pink areas represent advanced warming. (A, left) Agro‐climate zonation of Europe based on growing season length (GSL) and active temperature sum (ATS) obtained as an ensemble median from five different climate model simulations during the baseline period (1981–2010). (B, right) Ensemble median spatial patterns of agro-climate zones migration under 2°C global surface warming according to model RCP8.5. Gray areas represent regions where no change with respect to the baseline period is simulated.

A combination of ice sheet melting and the flow of melt water into the oceans on the one hand, and ongoing warming of tropical continental zones on the other hand, are likely to lead to the following: Figure 3. A. 2080–2100 meltwater-induced sea-air temperature anomalies relative to the standard RCP8.5 ensemble (Bronselaer et al., 2018), indicating marked cooling of parts of the southern oceans. Hatching indicates where the anomalies are not significant at the 95% level; B. Negative temperature anomalies through the 21st-22nd centuries signifying stadial cooling intervals (Hansen et al., 2016); C. A model of Global warming for 2096, where cold ice melt water occupies large parts of the North Atlantic and circum-Antarctica, raises sea level by about 5 meters and decreases global temperature by -0.33°C (Hansen et al., 2016).

The extreme rate at which the global warming and the shift of climate zones are taking place virtually within a period less than one generation-long, faster than major past warming events such as at the Paleocene-Eocene boundary 56 million years ago, renders the term “climate change” hardly appropriate, since what we are looking at is a sudden and abrupt event.

“Tipping points could fundamentally disrupt the planet and produce abrupt change in the climate. A mass methane release could put us on an irreversible path to full land-ice melt, causing sea levels to rise by up to 30 meters. We must take immediate action to reduce global warming and build resilience with these tipping points in mind.”

Computer modelling does not always capture the sensitivity, complexity and feedbacks of the atmosphere-ocean-land system as observed from paleoclimate studies. Many models portray gradual or linear responses of the atmosphere to compositional variations, overlooking self-amplifying effects and transient reversals associated with melting of the ice sheets and cooling of the oceans by the flow of ice melt.

“The climate metrics that we consider lead to substantially different future climate projections when accounting for the effects of meltwater from the Antarctic Ice Sheet. These differences have consequences for climate policy and should be taken into account in future IPCC reports, given recent observational evidence of increasing mass loss from Antarctica” and “However, the effect on climate is not included (by the IPCC) and will not be in the upcoming CMIP6 experimental design. Similarly, the effects of meltwater from the Greenland Ice Sheet have so far not been considered, and could lead to further changes in simulated future climate”. Depending on future warming the effect of Antarctic ice meltwater may extend further, possibly becoming global.

By contrast to ocean cooling, further to NASA’s reported mean land-ocean temperature rise of +1.18°C in March 2020 above pre-industrial temperatures, relative to the 1951-1980 baseline, large parts of the continents, including central Asia, west Africa eastern South America and Australia are warming toward mean temperatures of +2°C and higher. The contrast between cooling of extensive ocean regions and warming of the continental tropics is likely to lead to extreme storminess, in particular along continent-ocean interfaces.

The late 20th century to early 21st century global greenhouse gas levels and regional warming rates have reached a large factor to an order of magnitude faster than warming events of past geological and mass extinction events, with major implications for the nature and speed of extreme weather events.

For these reasons the term “climate change” for the current extreme warming, which is reaching +1.5°C over the continents and more than +3°C over the Arctic over a period shorter than one century, no longer applies.

The world is looking at an extremely rapid shift in the climatic conditions that have allowed civilization to emerge.

Note to readers: please click the share buttons above or below. Forward this article to your email lists. Crosspost on your blog site, internet forums. etc.