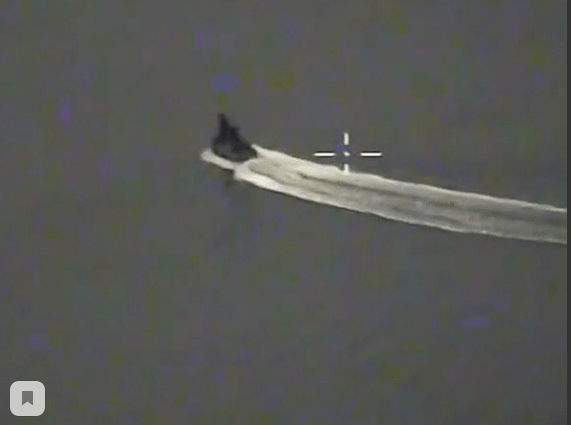 The British Embassy’s Press Office has stopped answering its telephones in Moscow. It is also refusing to respond to emailed requests like the name of the Embassy defence attaché, a naval officer, who appeared at the Russian Defence Ministry on Wednesday to listen to the official protest of HMS Defender’s 31-minute, 29-kilometre run into Russian territorial waters that morning.

It is in the small details that the meaning of the naval engagement off Cape Fiolent, Crimea, can be found. In not lining up the small details so they corroborate the official interpretations, the British Government in London has demonstrated less competence than the Polish Government in Warsaw three months ago, when it sent fishing boats, a navy mine-layer and an anti-submarine patrol aircraft against Russia’s Nord Stream-2 pipe-laying vessel, the Fortuna.

In that episode, Warsaw’s defence ministry tweeted officially that “the Polish Navy does not carry out any provocative activities and carries out its statutory tasks in accordance with international law. M-28B Bryza aircraft regularly carry out patrol and reconnaissance flights in the Baltic Sea area.”

In this week’s episode, London’s Ministry of Defence tweeted: “No warning shots have been fired at HMS Defender. The Royal Navy ship is conducting innocent passage through Ukrainian territorial waters in accordance with international law. We believe the Russians were undertaking a gunnery exercise in the Black Sea and provided the maritime community with prior warning of their activity. No shots were directed at HMS Defender and we do not recognise the claim that bombs were dropped in her path. As is normal for this route, she entered an internationally recognised traffic separation corridor. She exited that corridor safely at 0945 BST [11:45 Moscow time]. As is routine, Russian vessels shadowed her passage and she was made aware of training exercises in her wider vicinity.”

The wording of both communiqués was a combination of calculated imprecision and state propaganda. But the words covered retreat under Russian counter-attack. It’s on occasions like these, when the facts don’t match the words, that retreat under fire means backfire. Like the Poles, the British lose by gaining nothing. The Russians win by demonstrating effective defence of a red line.

For comparison with the Polish incident in the Baltic Sea on March 28-30, follow the Battle of Bornholm here. 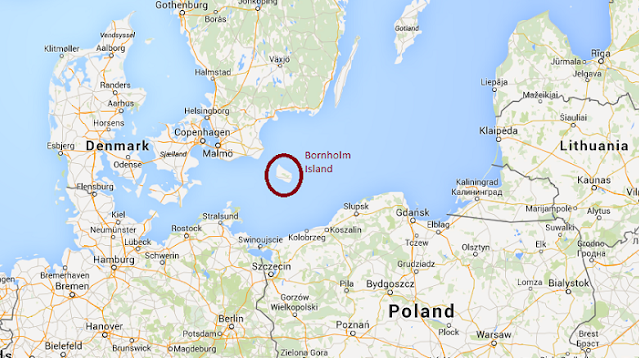 For the record of earlier hostile encounters in the Black Sea, here’s the USS Porter incident of February 2017. There were embarrassments for the US Navy immediately after the putsch in Kiev in February 2014. Then there was the Baltic Buzz incident involving USS Donald Cook and Polish Navy units off Kaliningrad in April 2016. In that episode, the Russian Su-24 aircraft making low passes over the US vessel were equipped with electronic warfare pods, not armed with missiles.

The evidence accumulating from each of these records is that the firepower marshalled by the Russian side against the NATO side has escalated significantly, along with the readiness to use it. In this latest episode, the British managed only one vessel against more than 20 Russian aircraft, at least two naval vessels. Compared to the other episodes, the British drew Russian fire for the first time – 30-mm cannon from the coastguard vessels, and the dropping of four OFAB-250 bombs.

Several hours elapsed before Ministry of Defence staff at Whitehall assembled their version of the episode for the press; 22 more minutes ticked by on the clock before the British defence minister, Ben Wallace, 51 years old last month, signed his name. 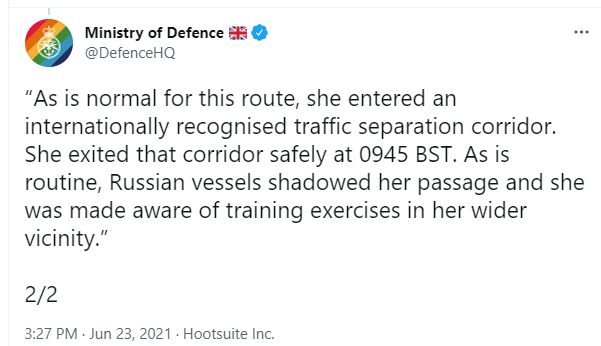 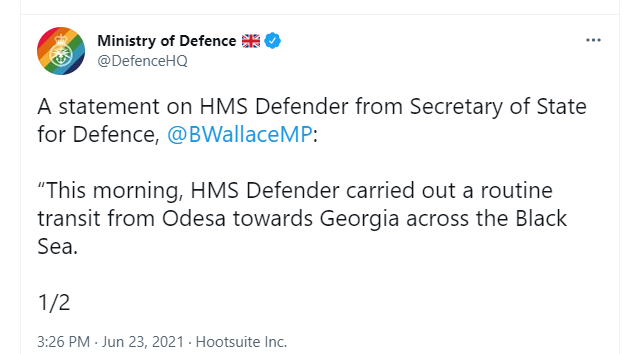 In the British compilation versions, published from reporters on board the British destroyer by the BBC and by the Daily Mail, precise timing is foggy. However, both reports confirm the Defender was warned by radio not to cross the border line into Russian territorial waters; went on action stations with armed guns and missiles; and then crossed the line. In the eye-witness reports, maps and photographs, several bursts of Russian ship cannon are recorded. The change of course to port, northeastward into Crimean waters, and then the run to starboard and southwards over the line again, are also recorded. 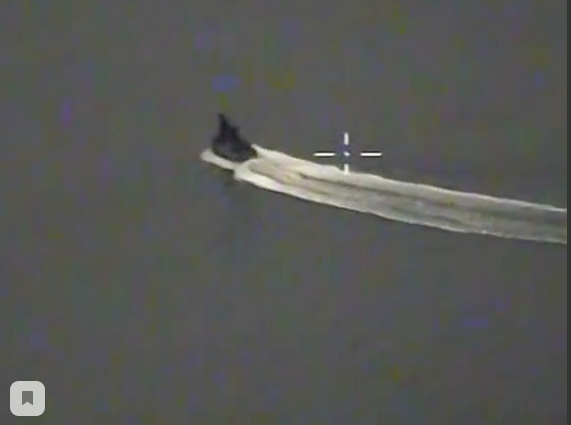 Russian aerial drone photograph of Defender changing course. In the BBC version: “The crew were already at action stations as they approached the southern tip of Russian-occupied Crimea. Weapons systems on board the Royal Navy destroyer had already been loaded. This would be a deliberate move to make a point to Russia. HMS Defender was going to sail within the 12 mile (19km) limit of Crimea’s territorial waters. The captain insisted he was only seeking safe passage through an internationally recognised shipping lane. Two Russian coastguard ships that were shadowing the Royal Navy warship, tried to force it to alter its course. At one stage, one of the Russian vessels closed in to about 100m. Increasingly hostile warnings were issued over the radio – including one that said ‘if you don’t change course I’ll fire’. We did hear some firing in the distance but they were believed to be well out of range.” A Canadian military source comments: “I believe they went in hot. [BBC] stated they armed weapons as they aproached the southern tip. He said the move into the territorial zone was deliberate. He did not say weapons were armed in response to Russian buzzing or threats.” 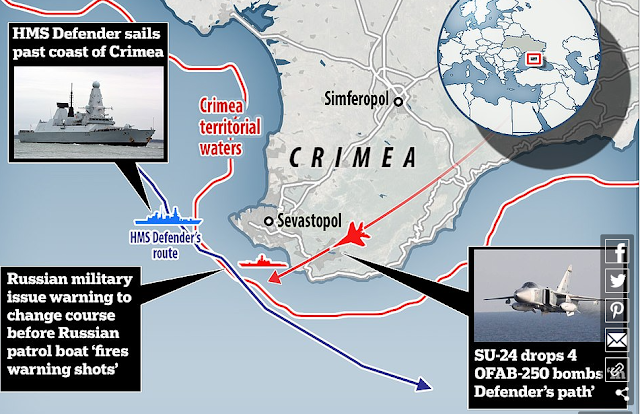 In the Daily Mail version, cannon were fired by both Russian coastguard vessels, one astern and one abreast. The Russian AK-630 cannon range is 5,000m – the ship range to the Defender was considerably less. The Rubin-class coastguard vessels have an unclassified top speed of 25 knots; the Type-45 destroyer 32 knots. “The Russian jets were flying ‘wings clean’, meaning they were not carrying missiles. But the aircraft are equipped with high powered cannons which, if armed, could have ripped through Defender’s hull. Both coastguard vessels were equipped with 30mm cannons with live rounds. Other fully armed Russian vessels are also patrolling in our vicinity.”

Precision is available from the Russian Defence Ministry. “At 11: 52 [local Russian and Moscow time] on June 23, this year, the destroyer HMS Defender of the British Navy, operating in the northwestern part of the Black Sea, crossed the state border of the Russian Federation and entered the territorial sea near Cape Fiolent for 3 km. The British destroyer received a warning about the use of weapons in case of violation of the state border of Russia, but did not respond to it. At 12:06 and 12:08, a border patrol ship fired a warning shot. At 12:19, the Su-24M aircraft performed a warning bombing (4 OFAB-250) on the course of the movement of the destroyer HMS Defender…. At 12:23, thanks to the joint actions of the Black Sea Fleet and the Border Service of the FSB [Federal Security Service] of Russia, the destroyer HMS Defender left the borders of the territorial sea of the Russian Federation.” This was 10:23 London time – 38 minutes later than the Defence Ministry tweet claims.

Russian military reports also suggest the British, with Dutch, NATO and Ukrainian participation in Odessa, attempted a cyber deception exercise several days before the June 23 operation. “Tracking data on [the Defender’s] location, as well as the coordinates of the Dutch frigate Evertsen… were falsified after both ships entered Odessa on June 18. On the night of June 19, the receiving station in nearby Chernomorsk [formerly Illichivsk, Ukraine] suddenly began transmitting distorted data about these ships to the service of the Automatic Identification System (AIS). According to these data, Defender and Evertsen left Odessa shortly before midnight on June 18 and headed directly towards Sevastopol, the main base of the Black Sea Fleet. In fact, the ships did not leave the port of Odessa, as evidenced by live broadcasts from webcams on YouTube. Fake coordinates for the geolocation of NATO ships in the AIS system were sent to the aggregator MarineTraffic.com and other similar sources. Thus, an imaginary route was drawn on the AIS screen, which, however, three days later Defender repeated in reality.”

This was deliberate faking, the Russian military sources say. At the same time, they add, “such fakes in the AIS system could only deceive the press. The command of the Black Sea Fleet relies only on its own data. The navy and air force, as well as the coastguard, have enough of their own technical resources to monitor the maritime border area. Even when a foreign ship approaches the border of the 200-mile economic zone, we are already starting to track its movement.”

The accumulated evidence from both sides indicates the British challenged the Russian border line and its lightly armed defence screen, with advance planning and deliberate course change, confident the Russian anti-ship missiles onshore, at sea, and in the air would not be fired. Against them, the British knew the Defender had no defence.

Making this appear to be other than it was has turned into a task for which the Ministry of Defence in London has managed just three tweets, and the British Embassy issued this recorded message: “No one is available to take your call.”

In Moscow the Defence Ministry broke its customary practice by publishing its film of the official summons and dressing-down of the British Embassy and Royal Navy’s representative in Moscow.

The
British Defence Attaché, with interpreter, at the Defence Ministry
during his summons on June 23.
Source: https://colonelcassad.livejournal.com/6861922.html
The Guardian reported:
“The British plan was to assert navigation rights in the Black Sea
in support of Ukraine, which lost control of Crimea after Russia
annexed the peninsula in 2014, an action condemned and not recognised
by the West. Ben Wallace, the UK defence secretary, said HMS Defender was
carrying out ‘routine transit from Odesa towards Georgia across the
Black Sea’  using an “’nternationally recognised traffic
separation corridor’”.

Whitehall has not managed to get its post-event stories straight. If their line is that this was innocent passage, the arming of weapons before the port course change and run into the territorial zone makes a lie of it. If they say they don’t acknowledge the Russian maritime zone off Crimea and planned to ignore it, then this was a military and political challenge, not innocent passage. If they say Russian firing was not directed at them, and the aerial bombs dropped were also not targeted at the vessel, then this is transparent evasion — both Russian weapons were used as warning shots, so that, by custom and meaning, the warning was directed at the vessels, the weapons away from them.

Deputy Foreign Minister Sergei Ryabkov has made this distinction with a new warning that if there is another such challenge, the weapons will be targeted at the challenger. “We can appeal to common sense, demand respect for international law, and if that doesn’t work, we can bomb,” he told the Russian press. In future the ordnance would be dropped, “not only in its path, but also on target.”

What has been gained, by whom, and for what end?