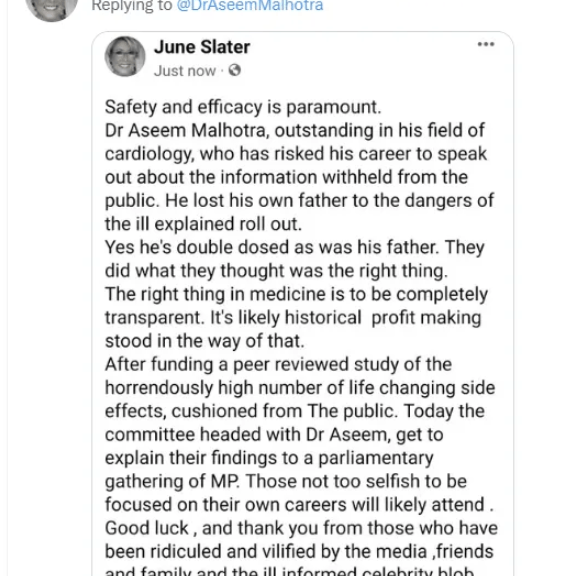 Their reasoning is that there is “no evidence” that the vaccines have killed anyone, they have saved well over 100,000 lives in the UK, and they are safe, so no investigation is necessary!

You can’t make this stuff up. You really can’t.

First, Dr. Aseem Malhotra testified in Parliament about the dangers of the COVID vaccine on October 20. There is no press coverage. I couldn’t find any references to his speech in searching Google. I even had a hard time finding anything on Twitter!

Here’s a tweet I found estimating that the number of MPs who would attend his talk would be those “not too selfish to be focused on their own careers.” Can you guess the number (before I tell you)?

I found out the number from an email from an MIT professor!

I have followed up with Danny Kruger MP and also my contact at the DM offering your time.  Danny is one of only 4 Members of Parliament who attended Aseem’s presentation to Parliament.

Wow. Just Danny Kruger MP and 3 other MPs attended a talk on vaccine dangers by one of the UK’s top cardiologists.

That is stunning. Britian’s elected officials don’t want to hear any evidence of harm.

Aseem has been calling for a halt to the vaccine program. This clip on Fox News has received nearly 1M views.

Parliament debates the vaccine safety issue and decides there is absolutely nothing to see here because they hear testimony that there is no evidence that anyone has died and hundreds of thousands of lives have been saved. Read the full story here.

Here is the transcript of the discussion in the UK Parliament on Oct 24, 2022.

Here are the key statements (in brackets is the section) and the bolding is my addition:

I am referring to the COVID vaccine, which has saved hundreds of thousands of lives. I take my hon. Friend’s point, but there is no evidence that those deaths were caused by the COVID vaccine. Let me acknowledge and pass on my sympathies to the very small number of people for whom vaccines may not have worked as intended, and who may have suffered an adverse reaction from vaccines.

I turn to vaccine safety. All vaccines used in the UK covid-19 vaccine programme are safe. In the UK we have some of the highest safety standards in the world. The MHRA is globally recognised for high standards of quality, safety and medicines regulation. Each covid-19 vaccine candidate is assessed by teams of scientists and clinicians on a case-by-case basis. There are extensive checks and balances at every stage of vaccine development. It is only once each potential vaccine has met robust standards of effectiveness, safety and quality set by the MHRA that it will be approved for use.

It is also important to stress that the surveillance of vaccine safety and adverse reactions does not stop once a vaccine has been approved. The MHRA and the UK Health Security Agency constantly review a wide range of available data on the safety of vaccines, including UK and international reports of adverse reactions.

I thank my right hon. Friend for his kind words. I will, of course, look at all the evidence. He is aware of my experience as a clinician and he knows that I will look at the evidence-based medical process. [21]

As I was saying, despite the progress we have made, we must not become complacent. We cannot risk an increase in serious illness, hospitalisations and deaths from covid. The UKHSA estimates that vaccinations had averted up to 128,000 deaths and 262,000 hospitalisations by the end of September 2021, and many more since then.

It was a Brit who discovered vaccines in the way that we know them today, and they have been effective in tackling a range of illnesses that would previously have been life-threatening or very dangerous indeed. The proof is that they work, they are saving lives and they protect us and others. I join the Minister in urging people to come forward for their vaccines this winter, to help to protect themselves and others and ensure the strain on our NHS is as minimal as possible.

The headlines after the meeting

The news headlines after the meeting basically said a few people complained, but there will be no investigation since it is so clear the vaccines are safe. Why bother with an investigation? Here’s the full story.

The NHS website says “reports of serious side effects are very rare” and the “COVID-19 vaccines approved for use in the UK have met strict standards of safety, quality and effectiveness“.

The truth isn’t going to be exposed in the UK anytime soon. They are NEVER going to figure this out.

If you want to help put a stop to this and you haven’t yet donated to Ron Johnson’s re-election campaign, now would be a good opportunity to do so. It’s our best hope of exposing the truth in the US. Even a donation of $10 can make a difference