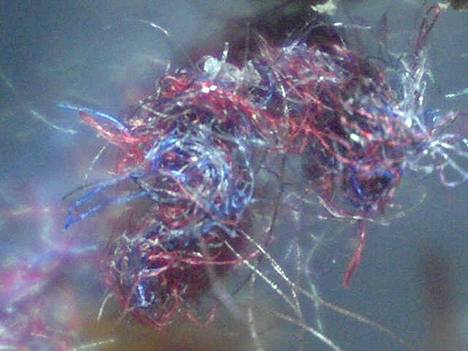 Proof that Morgellons is MAN MADE!
Government stonewalls investigation 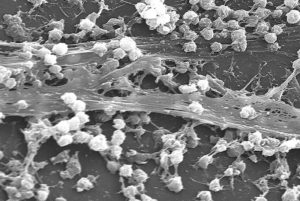 For viewzone by Dan Eden

[Thanks to “Kathy S.” whose courage in revealing these facts made it possible to write this.]If you have ever watched horror movies, you’ve probably seen one where a person becomes infested by bugs or worms. Their skin begins to move and ripple as dark shapes squirm under its surface. Suddenly their skin bursts open allowing a colony of bugs to escape! While this is an exaggeration of Morgellons Disease, it’s not that far off.

For over a decade now, thousands of people on every continent (except Greenland) have contracted a mysterious disease that still eludes the medical community. Morgellons remains shrouded with controversy, paradoxes and politics and has become a major “conspiracy theory” on the world wide web.

Morgellons victims have the sensation of bugs, worms or sometimes ants crawling under their skin. They describe being stung or feeling like needles are sticking in them. They develop skin lesions that bleed and fester, exuding a kind of film that covers the wounds and prevents them from healing. But the weirdest thing is the mysterious appearance of fluffy, white cotton balls that form on the surface and colored threads that seem to grow from inside the skin.

The threads or filaments are what brings most victims to their physician. After weeks of observing and collecting these threads, patients often bring them to their physician in matchboxes, plastic bags or jars. Quite often, Morgellons sufferers are excited and a bit hysterical and suggest that they have some sort of “thing” living inside of them. Totally unfamiliar with these symptoms, the typical physician usually makes the diagnosis of delusional parasitosis and refers the patient for psychiatric care.

“Delusional Parasitosis is a form of psychosis whose victims acquire a strong delusional belief that they are infested with parasites, whereas in reality no such parasites are present. Very often the imaginary parasites are reported as being “bugs” crawling on or under the skin; in these cases the experience of the sensation known as formication may provide the basis for this belief.

Morgellons does, in fact, have a psychological component. Victims report problems with short term memory, clouded thoughts and emotional fatigue. The reluctance of physicians to perform tests or examine their specimens further incites these victims and deepens the conviction of their caregivers that the wounds are self-inflicted and psychogenic.

With the help of the internet, Mary Leitao, who gave the disease its name, reached out to others who had been turned away by the medical community. After being frustrated with the treatment of her young child who had these symptoms, Mary found other victims of this strange disease. Together they demanded that the medical community (and politicians) take them seriously. Through the influence of her oragnaization, The Morgellons Research Foundation (morgellons.org), some scientists did examine the specimens, specifically the strange threads that Morgellons victims had growing from their wounds. The results of laboratory tests on these fibers were unexpected and extremely strange. This strangeness has only served to feed conspiracy theorists who claim that they are the result of such things as chemtrails, a secret genetic modification program, an alien organism or rogue nano-technology.

As you will see, these theories all seem to have some legitimate basis. 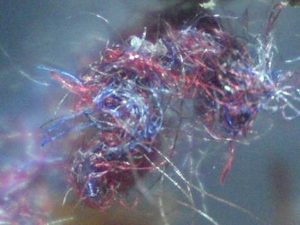 Without the threads or fibers that Morgellons victims claim to extract from their lesions, their symptoms are not unique. Itching and the crawling sensation are common when the skin is irritated or there is an allergic reaction. Scratching the skin with one’s fingernails can open the skin to infections and prevent natural healing. What makes Morgellons symptoms unique are these fibers. So an analysis of these artifacts should tell us volumes about whether this is some new disease or a common one.We all have fibers on our skin. Just have a look at your own skin. Bits and pieces of our clothing rub off and stick to our skin all the time — just look at the lint in your belly button! So the first thing scientists did was to examine the Morgellons fibers to see where they might have originated.

The FBI keeps an extensive catalog of threads, hair and fiber for forensic analysis. With just one thread, for example, they can match the year and model of automotive carpeting, or the manufacturer of a particular item of clothing. But when the Morgellons specimens were submitted to the FBI Forensic Lab and examined they could not be matched!

The next step was to determine the composition of the fibers. What were they made from?

Morgellons fibers all have one thing in common — they appear to originate in the skin lesions of their victims. But individually they are quite different in both appearance and composition. There are fuzzy white fibers, sometimes called “cotton balls”, that are found growing on top of the skin lesions. Then there are the colored fibers or threads, usually pink, blue or black, that are found under the skin — even in the surrounding healthy tissue — and often poke through the lesions. Then there are clear fibers that have a small golden bulb on the end.

The white fuzzy fibers or cotton balls were found to be fluorescent. This means that they glow when exposed to ultraviolet light. Since no human cells have fluorescent properties this was quite a surprise.

Scientists have observed that certain marine organisms like jellyfish have the ability to glow in the dark, or fluoresce. This property has advantages for organisms that live deep under the water where there is little sunlight. By using a procedure called Trans-genetics, the DNA from jellyfish has been artificially inserted in the genetic information of other organisms, causing them to glow. Below are examples of trans-genetic goldfish and pigs. The fluorescent properties are spliced into certain genes to enable scientists to “tag” these genes and better understand their function. 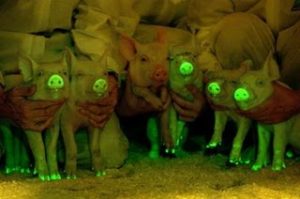 Finding this fluorescent property in a human body is not natural. It suggests that the glowing fuzzy fibers quite possibly originated from a trans-genetic organism that was residing in the Morgellons lesion. Scientists wanted to know how such an organism got in to the Morgellons victims.

Next the scientists next tried to determine the composition of these fuzzy filaments. They attempted to dissolve the material in a strong hydrochloric acid preparation — but to their surprise it did not dissolve! So they ground the fiber with a mortar and pestle, separated the components by letting them migrate across a gel in an an electric field, then used a technique called spectroscopy to match them to known molecular profiles. The results showed that the fibers were made from human serum albumin (the liquid part of human blood that contains proteins) and cytoskeletal keratin (the stuff our hair and fingernails are made from). That would be expected if these fibers were just fine body hairs or fuzz, but what was making them fluorescent?

Upon further examination, the fluorescent properties were found to come from a soluble substance that contained proteins from some very unusual organisms:

All of these organisms have had their DNA sequenced in the last decade, which is quite a coincidence. But they should not have this fluorescent property! How did that happen? And how did all these proteins come from the Morgellons lesions?What’s even more weird in that despite having all these exotic proteins, there were no human protein profiles present in the florescent substance!

The pink and blue fibers were analysed and were found to have the chemical profile of polythene!

The analysis of these polythene fibers could justify the claims that these Morgellons threads are little more than common lint. But remember, the FBI lab could not match them to any known man-made fibers. Since they are common to Morgellons lesions we should expect that they would have a very well known origin. 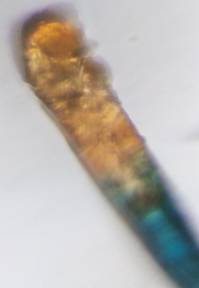 The most enigmatic of the fibers are called “goldenheads.” The fibers are frequently clear and sometimes hollow with a golden colored bulb on the end. They resemble a hair follicle with an intact root.

When scientists examined these filaments they discovered that they had an extremely high melting point — about 1400F! They also discovered that they contained cellulose. Cellulose is the structural component of the primary cell wall of green plants, many forms of algae and the oomycetes. Some species of bacteria secrete it to form biofilms. Cellulose is the most common organic compound on Earth. About 33 percent of all plant matter is cellulose. The cellulose content of cotton is 90 percent and that of wood is 50 percent.

As stated earlier, Morgellons skin lesions have been found to be covered by a biofilm. Biofilms are a kind of sticky substance that acts like glue, sticking cells to eachother or to some type of surface. The film of tartar that you find on your teeth in the morning is a good example.

Cells that are stuck together with a biofilm have an advantage over other cells in that the body’s immune system cannot easily penetrate this film to identify and kill them. Thus, an infection covered by a biofilm can multiply and fester and even avoid the effects of antibiotic agents.

Physicians are familiar with biofilms in the human body and they represent a challenge when combating resistent infectious diseases. Their appearance in Morgellons skin lesions is a mystery and is the reason why these open wounds grow and spread.

So far, if we take the analyses of the fibers as fact, we have a trans-genetic substance that is fluorescent and contains human, bovine (cow) and bacteria proteins, mysterious and unidentifiable fibers made of polythene that stick through the skin and causes its victims to constantly itch their wounds, and an almost indestructible tube containing a biofilm substance that prevents the skin lesions from healing. This nefarious disease has never been encountered before and there is no known cause or cure. So what’s next?