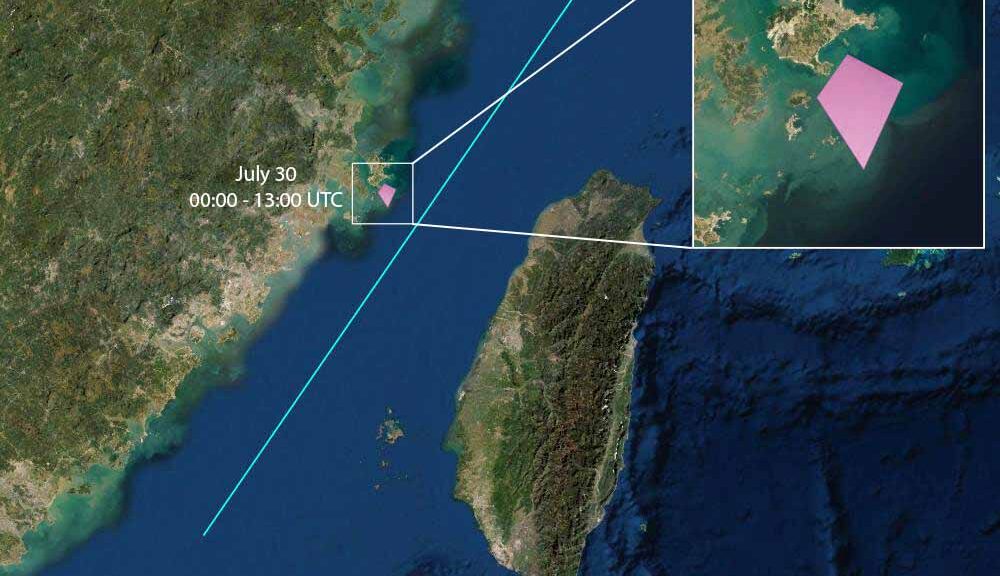 Rampant Escalation – China: Intercept Pelosi’s Jet at All Costs – Green Light Even to Shoot Down! – Senator: It will be an act of war

Will the US back down?

The China-US crisis is escalating by the hour as American sources confirm that the Speaker of the House of Representatives, Nancy Pelosi, is heading to Taiwan.

“Diplomatic sources confirm that he is going. She will visit Taiwan at the start of her journey within the next few days…  By the time she lands, things could change, but she’s going.”

The response was immediate in a way that the US probably didn’t even expect, but it completely vindicates WarNews247: Orders have been given to intercept Pelosi’s plane and if it resists and tangles with other US planes, shoot it down.

The Chinese threats have caused an uproar in the US and already several Senators are reacting. Beijing has publicly committed to the use of armed force and it is difficult to impossible to back down. It is clear, however, that the Chinese Armed Forces staff has given clear instructions and released rules of engagement for “Operation Pelosi”.

The situation is now at a tipping point and it will be interesting to see who will be the first to cave in this US-China chicken game. Postponing Pelosi’s visit to Taiwan is more likely.

Chinese state media has just suggested that the PLA should shoot down Pelosi’s plane if it travels to Taiwan.

This would be an immediate act of war.

The United States does not accept foreign policy demands from Communist China or any other aggressive bully . “

Read also: Green light to the Chinese Army for intervention – The US sends the USS Ronald Reagan to Taiwan – YP.AM. China: “Pelosi will not land…” (vid)

A while ago, Chinese state media that echoes the positions of the Chinese Communist Party demanded that the US collect Pelosi in time or there will be military action against her aircraft.

According to Pelosi ‘s Asia travel itinerary, as reported by the US media, her trip includes Japan, South Korea, Malaysia and Singapore, and the island of Taiwan was listed as “tentative”. Many believe this is a ploy by Pelosi, who is very likely to fly to the island of Taiwan from Japan and pay a surprise visit.

This sneaky trick is indeed hard to predict, but one thing is certain:

China will take strong measures to respond decisively to face all this. She will let the enormous danger Pelosi poses take its toll on herself. This is not only a firm and clear stance, but will certainly be accompanied by a strong and concrete plan of action.

China’s answer is clear, as always.

“Those who play with fire will perish by it.” That’s what Pelosi and the Taiwanese separatist forces who support her have been told.

A White House official called it a metaphor China tends to use regularly. He completely misunderstood and misunderstood the point and weight of this sentence.

Any act to violate the red line will surely hit the iron wall of China’s counterattack. China’s repeated public warnings are by no means a joke.

Washington needs to turn to history to see that China has always kept its word.

Regardless of the perspective of international law or international morality, it is legitimate and necessary for China to protect its national sovereignty and territorial integrity. Today, China’s will and ability in this regard is a given. US President Joe Biden reiterated that he adheres to the one China policy and does not support “Taiwan independence”. What kind of behavior is a visit to the island of Taiwan by Washington’s “No. 3 official”?

If you come to insult me, I will make you suffer the consequences. This is not a China that threatens or bullies, but protects and defends its core interests.

It must be pointed out that the current understanding of this serious situation is very inadequate in Washington political circles and some erroneous views are being circulated that mislead public opinion. These anti-China politicians and media are fanning the flames. On the one hand, they say that if Pelosi actually visits the island of Taiwan, it will be the “pinnacle of her political career.” On the other hand, if he does not go, he will “give China some kind of victory” and cannot let China decide where he can go.

The point is that Taiwan is China’s territory, not a place where people can come and go at will.

If you come uninvited with malice, of course we have the right and the need to deal with you.

The Pingtan Maritime Security Administration in Fujian Province (ss speaks for the Chinese Navy mobilization previously reported by WarNews247) issued a navigational warning on Friday, saying live-fire training missions will take place in waters near Pingtan Island starting at 8 a.m. to 9 p.m. on Saturday. All ships will be denied entry.

Live fire training means using bullets and those trespassing will face the consequences. It is not excluded that other exercises with live fire will take place in the coming days. If necessary, we could also demarcate missile test areas and conduct ballistic tests.

During the sensitive period, the People’s Liberation Army will monitor Pelosi’s plane in time.

If it is detected flying into our airspace, PLA fighters could warn, follow, intercept, electronically jam, force it to land, or repel it.

In this process, any consequences (such as takedown) may occur and the responsibility will be entirely on the US.

Some people may say, isn’t this a move that could spark a war with the US? In this regard, people can refer to China’s principles and positions on the trade war: not wanting a trade war, not fearing one, and having to fight when necessary.

Others say that if Pelosi were to sneak into Taiwan via civilian aircraft, it would be difficult to identify the plane. Is true. However, if it comes and goes like this, we may not be able to make similar moves in time but it will be Pelosi who brings the embarrassment.

Her act will be memorable and one day we will have to reward her.

In short, we have ways to increase the risk for Pelosi, significantly increase the cost of her visit, and amplify the price she has to pay. Let Pelosi deeply realize that the island of Taiwan is not a place where she can run wild.

It should also be emphasized that how China responds depends on the degree of provocation by the US and whether any actions by the PLA are defensive. We protect our homeland and our country and we are on the side of natural justice.

Pelosi’s visit to Taiwan had better be prevented in advance by Washington,” the Chinese conclude.

Maps: The area closed by the Chinese Navy 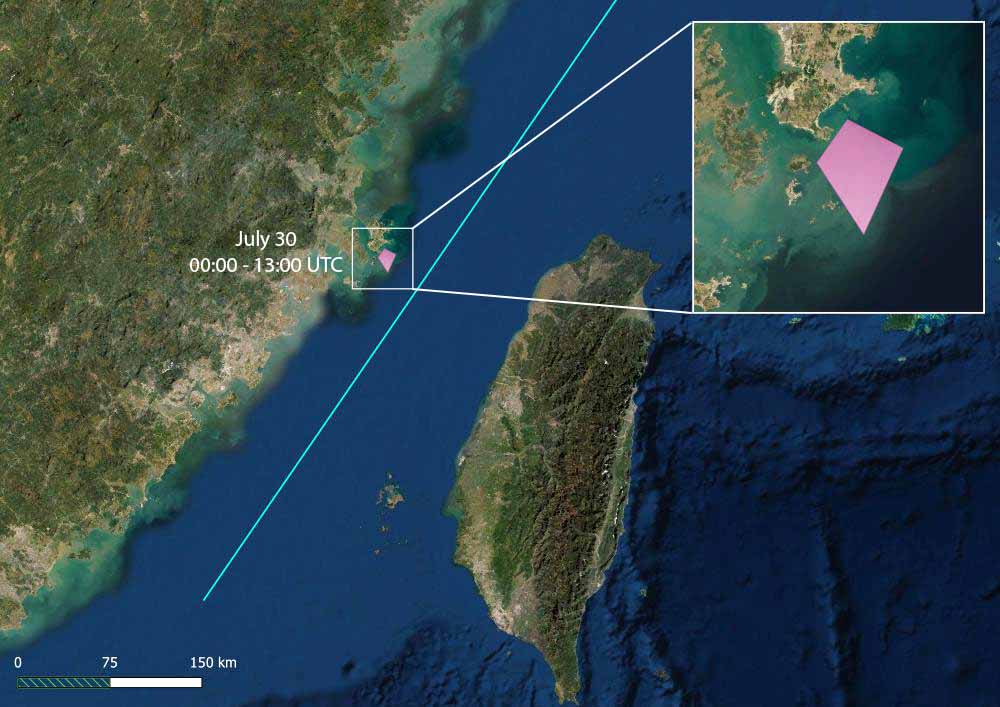 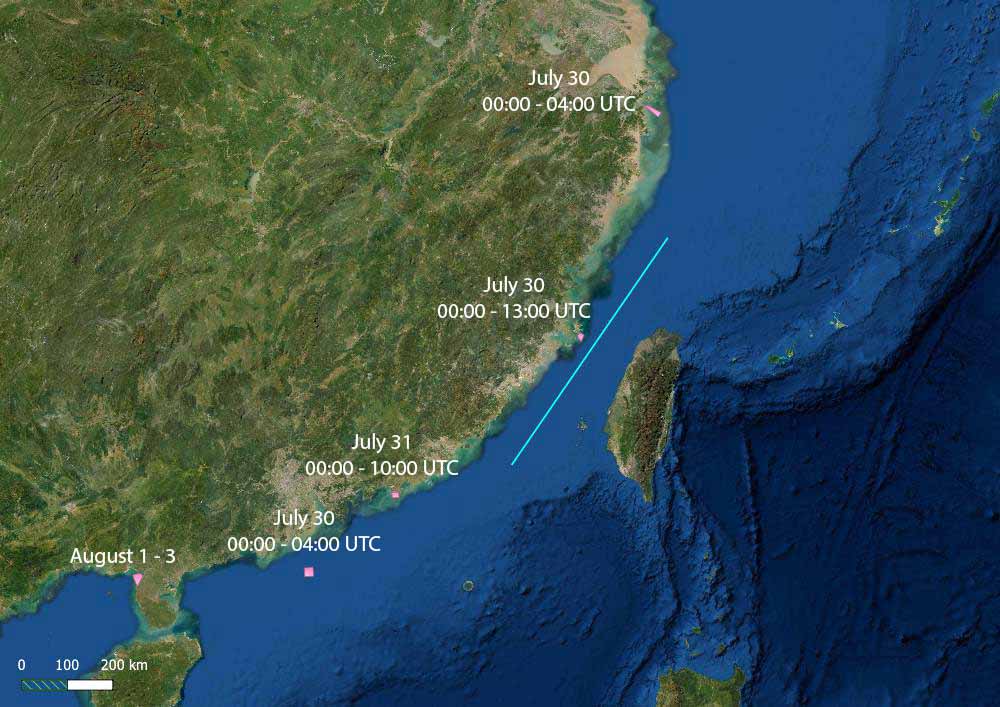