I was  very impressed by this documentary that came out just a week or so from geoengineringwatch.org.

I was particularly struck by the research that showed conclusively that micro-plastics and heavy metals such as aluminium, barium and strontium can be found at altitudes where spraying operations are carried out.

I regard the evidence as being conclusive – as conclusive as one can get in the atmosphere of secrecy and cover-up. I highly recommend watching the entire 2 hour documentary but the relevant parts are from the 1 hour mark.

I have looked up some of the news reports and scientific papers cited in the film.

It’s snowing plastic in Siberia, and new research will find out how serious the problem is 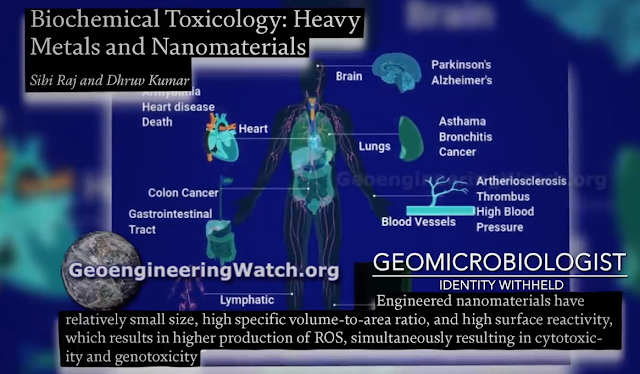 In Vitro Toxicity of Aluminum Nanoparticles in Rat Alveolar Macrophages 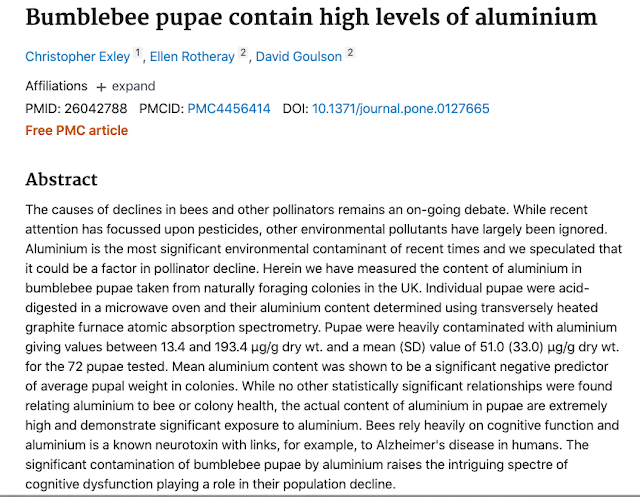 Evidence of Alzheimer’s, Parkinson’s and MND in brains of young people exposed to dirty air 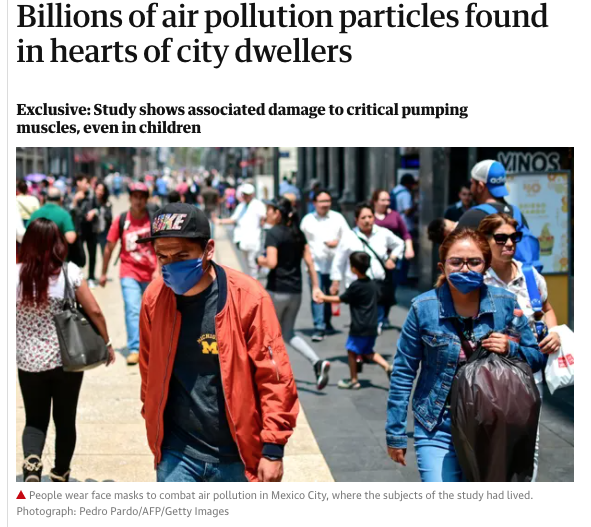 How big is a nanoparticle?

Study Found Plastic In Every Seafood Sample It Analyzed 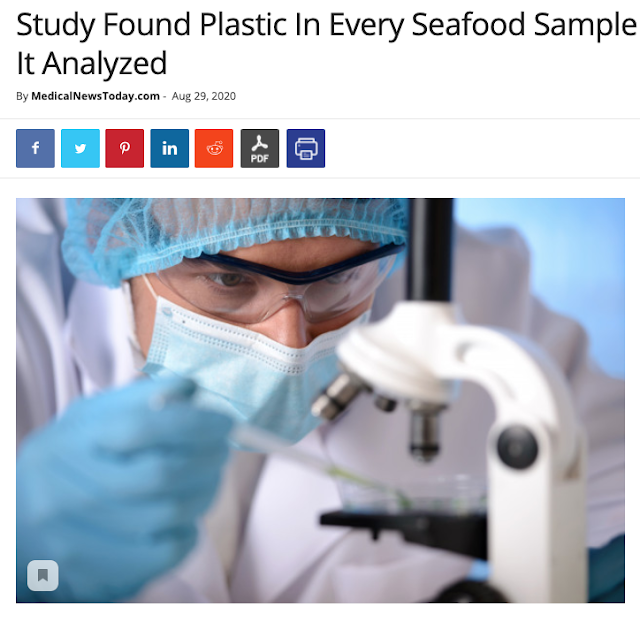 Micro- and nano-plastics in edible fruit and vegetables. The first diet risks assessment for the general population 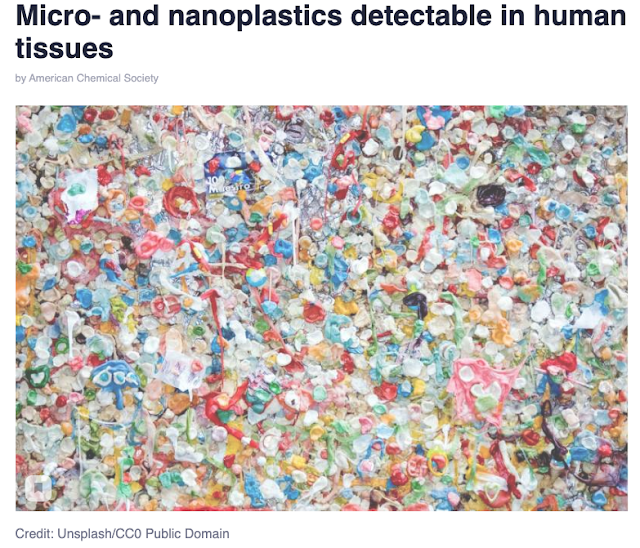 Microplastics found near Everest’s peak, highest ever detected in the world 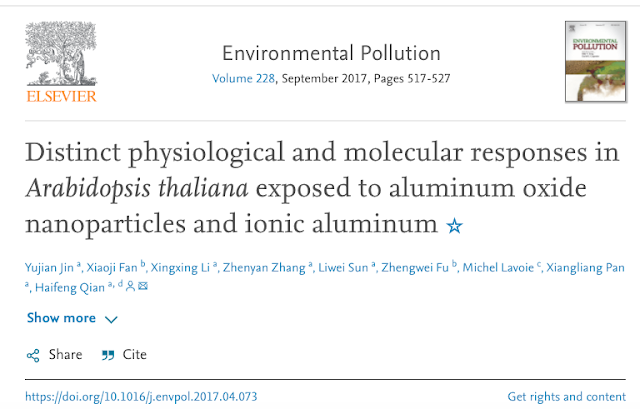 I could not easily locate the original article from geoengineeringwatch.org so it is from a different source 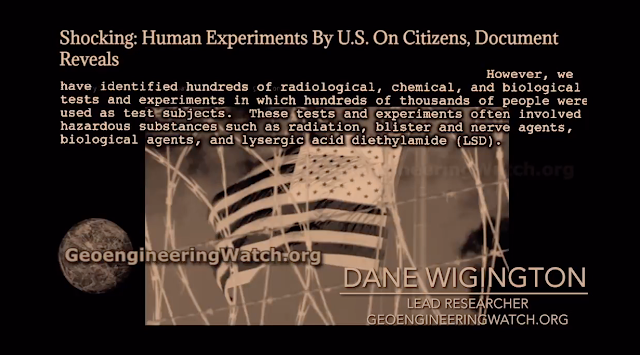 It reveals the level of official human guinea pig experimentation the United States conducts upon its own citizens.

“We are pleased to be here today to discuss the use of humans in tests and experiments conducted for national security purposes by the Department of Defense (DOD) and other agencies between 1940 and 1974.”

“As you requested, we focused our work on defense-affiliated programs that used human test subjects between 1940 and 1974. The programs included tests and experiments conducted or sponsored by the Departments of the Army, the Navy, and the Air Force; the Defense Nuclear Agency; the Central Intelligence Agency (CIA); the Department of Energy; and the Department of Health and Human Services. The tests and experiments involved radiological, chemical, and biological research…”

“The effects of the tests and experiments are often difficult to determine. Although some participants suffered immediate acute injuries, and some died, in other cases adverse health problems were not discovered until many years later–often 20 to 30 years or longer.”

“Government testing and experimentation with human subjects continues today because of its importance to national security agencies. For example, the Army’s Medical Research Institute for Infectious Disease uses volunteers in its tests of new vaccines for malaria, hepatitis, and other exotic diseases.”

“Since 1974, federal regulations have become more protective of research subjects and, in general, require (1) the formation of institutional review boards and procedures and (2) researchers to obtain informed consent from human subjects and ensure that their participation is voluntary and based on knowledge of the potential risks and benefits. We are in the process of reviewing the effectiveness of these measures. A National Institutes of Health official has stated that no mechanism exists to ensure implementation of the key federal policies in this area.”

“Precise information on the scope and magnitude of government tests and experiments involving human subjects is not available, and exact numbers may never be known.”

“However, our review of available documentation and interviews with agency officials identified hundreds of tests and experiments in which hundreds of thousands of people were used as subjects. Some of these tests and experiments involved the intentional exposure of people to hazardous substances such as radiation, blister and nerve agents, biological agents, LSD, and phencyclidine (PCP). These tests and experiments were conducted to support weapon development programs, identify methods to protect the health of military personnel against a variety of diseases and combat conditions, and analyze U.S. defense vulnerabilities. Healthy adults, children, psychiatric patients, and prison inmates were used in these tests and experiments. Documenting the precise number of tests and participants is difficult because government information is incomplete. Some records have been lost or destroyed, and existing documentation contains limited information and often does not identify names of participants.”

“The largest known test program was the atmospheric nuclear test program conducted from 1945 to 1962. The purpose of this program was to develop weapons and to gain a better understanding of the tactical effect on troops. Over this 17-year period, approximately 210,000 DOD-affiliated personnel, including civilian employees of DOD contractors, scientists, technicians, maneuver and training troops, and support personnel, participated in 235 atmospheric nuclear tests. We reported on two of these tests, known as Operation Crossroads, in 1985.”

“In a series of experiments conducted between the 1940s and 196Os, the Atomic Energy Commission and the U.S. Public Health Service funded research of the potential medical effects on people from fallout after a nuclear attack or accident. In some of the experiments, university researchers exposed mentally disabled children to low doses of radiation. Years after the experiments were completed, a task force found that researchers failed to satisfactorily inform the subjects’ families about the nature and risk of the experiments in order for them to make an informed decision when they gave their consent. The president of one of the universities involved in the experiments later apologized for the use of children and the failure to provide full information about the nature and risk. We are not aware of what, if any, further action was taken in this case.”

“During World War II and the Cold War era, the Army and the Navy conducted two major chemical research experiments in which thousands of service members were used as test subjects. An unknown number of other chemical tests and experiments were conducted under contracts with universities, hospitals, and medical research facilities. In some of the tests and experiments, healthy adults, psychiatric patients, and prison inmates were used without their knowledge or consent or their full knowledge of the risks involved.”

“During World War II, the Army conducted tests of protective clothing and equipment in which thousands of people were exposed to mustard gas and lewisite agents. In addition, the Army developed and tested offensive chemical weapons and evaluated the effectiveness and persistency of mustard agents in different environments. In February 1993, we reported that the Army’s records of its mustard test activities were not kept in a manner that readily identifies the participants. (see: ‘Veterans Disability: Information From Military May Help VA Assess Claims Related to Secret Tests (GAO/NSIAD-93-89, Feb. 18, 1993)’)”

“However, the available records show that 1,002 soldiers were commended for their participation in [chemical] tests in which they subjected themselves to pain, discomfort, and possible permanent injury for the advancement of research in protection of the armed services.”

“Similar to the Army’s tests, the Navy conducted tests of clothing and equipment that exposed thousands to the effects of mustard gas and lewisite agents [lewisite is a chemical weapon, blister agent, lung irritant, which causes severe burns and can cause death]. These experiments involved (1) gas chamber tests, in which service members were completely exposed to mustard and lewisite agents while wearing protective clothing, and (2) skin tests, in which amounts of mustard agent and antivesicant ointments were applied to service members’ forearms. The Navy has a list of the names of approximately 3,200 sailors who participated in mustard and lewisite agent tests performed by the Naval Research Laboratory. Additionally, Navy officials told us that between 15,000 and 60,000 Navy recruits had participated in skin tests conducted by a contractor but that the Navy had no record of the recruits’ names.”

“From 1952 to 1975, the Army conducted a classified medical research program to develop incapacitating agents. The program involved testing nerve agents, nerve agent antidotes, psychochemicals, and irritants. The chemicals were given to volunteer service members at the Edgewood Arsenal, Maryland, and four other locations. Army documents identify a total of 7,120 Army and Air Force personnel who participated in these tests, about half of whom were exposed to chemicals. The Army’s Medical Research and Development Command in Fort Detrick, Maryland, has the names and service numbers of all test participants and a list of the chemicals to which the service members were exposed. Some service members have testified before congressional committees that they were not fully informed of the risks involved.”

“During the same period, the Army Chemical Corps contracted with various universities, state hospitals, and medical foundations to research the disruptive influences that psychochemical agents could have on combat troops. The Air Force also conducted experiments on the effects of LSD through contracts at five universities. According to Air Force officials and records, approximately 100 people received LSD in these experiments. No effort has been made by the Air Force to determine if the participants’ names are available in the universities’ records.”

“According to a CIA official, from 1553 to about 1964, the CIA conducted a series of experiments called MKULTRA to test vulnerabilities to behavior modification drugs. As a part of these experiments, LSD and other psychochemical drugs were administered to an undetermined number of people without their knowledge or consent. According to the official, the names of those involved in the tests are not available because names were not recorded or the records were subsequently destroyed. However, some tests were done under contract, and no effort has been made by the CIA to determine if names are available in contractors’ records.”

“The Army conducted a series of biological warfare experiments and tests between 1949 and 1974. The purpose of these tests was to determine U.S. vulnerabilities to biological warfare. For example, between 1949 and 1969, the Army conducted several hundred biological warfare tests in which unaware populations were sprayed with bacterial tracers or simulants that the Army thought were harmless at that time. Some of the tests involved spraying large areas, such as the cities of St. Louis and San Francisco, and others involved spraying more focused areas, such as the New York City subway system and Washington National Airport.”

“In another Army experiment conducted between 1959 and 1974, approximately 2,200 volunteers were exposed to biological pathogens, such as Venezuelan Equine Encephalitis and Tularemia, as part of research to develop vaccines and antidotes.”

“Available records show that people suffered immediate acute injuries in some tests and that people died in at least two tests. For example, available records show that some participants in the Army’s and the Navy’s mustard and lewisite tests suffered burns and required hospitalization. Also, in a highly publicized case, an Army employee died in 1953, a short time after participating in a CIA experiment using LSD.”

“Research studies have also shown that exposure to some of the substances used in the tests may create health problems that often will not appear for many years. For example, the National Academy of Sciences concluded in 1993 that exposure to mustard agents could cause many serious diseases that would not immediately appear, such as leukemia, emphysema, respiratory and skin cancers, and eye diseases, and that lewisite agents could cause some of these same diseases.”

“…some agencies have made little effort to assist test participants by identifying test locations and participants in experiments conducted by contractors. The CIA, in fact, has not released the names of 15 of the approximately 80 organizations that conducted experiments under the previously discussed MKULTRA program because the organizations do not want to be identified.”

Md: Do This Immediately if You Have Diabetes (Watch)

Remember Her? Take a Deep Breath Before You See What She Looks Like Now