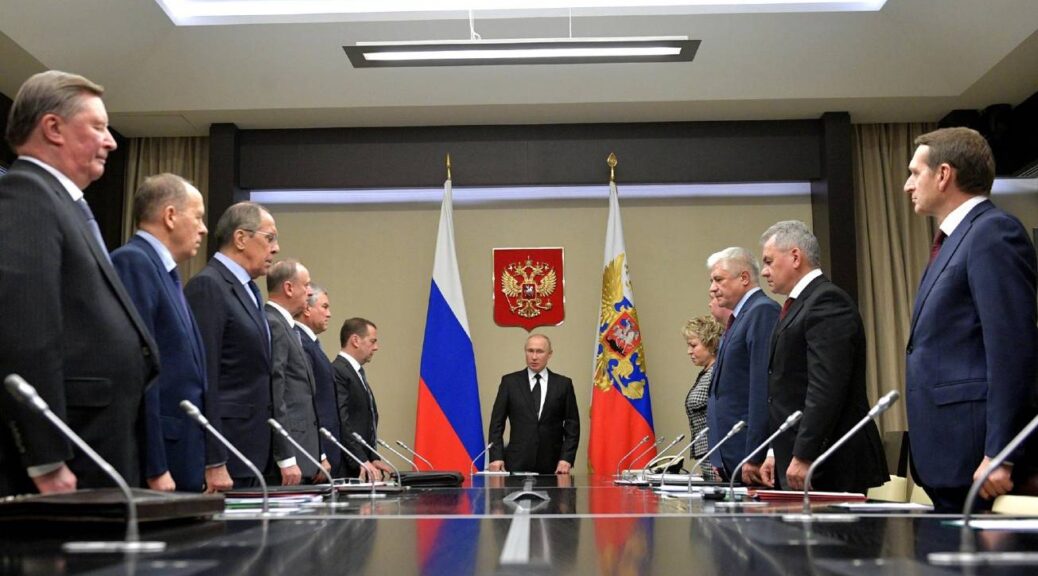 The concern and mystery surrounding the emergency convocation of the Duma is intensifying as V. Putin also convened an emergency National Security Council at the same time. Obviously something serious is going on in the background.

According to what has become known, the president of Russia signed decrees on the transition to a “war economy”. Some of the details that have become known speak of conscription procedures and laws that give superpowers in order for the military-industrial complex to be put on full war mobilisation.

Everything shows that there will be an extension of the war in Ukraine. Kharkiv, Odessa or even strengthening forces in the Kaliningrad enclave.

In addition, the fact that the US suddenly issued a travel advisory after so many months of war calling on Americans to leave Ukraine immediately is also worrying. Why now and why again after so long?

Video: The opening of the Security Council

At the same time, the President of Russia, V. Putin, signed a decree on special measures in the economy during special military operations abroad.

Russian President Vladimir Putin signed a decree on the right of the Russian government to introduce special measures in the economic sector to ensure that the Russian Armed Forces, other troops, military formations and agencies conduct counter-terrorist and other operations outside the territory of Russia.

The law provides that special measures may, among other things, provide for:

This applies to contracts concluded in accordance with laws no. 44-FZ “On the system of contracts for the supply of goods, works”.

In addition, the time to award government contracts under the state defense mandate is reduced.

The explanatory note notes that “due to the conditions of conducting a military operation by the Armed Forces of the Russian Federation, military formations and anti-terrorist and other operations outside the territory of the Russian Federation and, in particular, due to an operation in the territories of the Donetsk People’s Republic, the People’s Republic of Luhansk and Ukraine, the need for the repair of weapons and military equipment and the provision of materials and technical means increased in the short term.

In addition, he notes that the need to immediately meet these needs, especially in the context of sanctions and restrictive measures against citizens of the Russian Federation and Russian legal entities, will require a temporary focus of efforts in certain areas, the strengthening of the productive capabilities of the military’s organizations -industrial complex, including those of mobilization, and the organization and support of resources for deliveries under the state defense mandate.

For this, the government is required to provide the powers mentioned in the law.

The US Embassy has issued a sudden travel advisory

At the same time, the Embassy of the United States of America appealed to its citizens not to enter the territory of Ukraine and to leave immediately if they have not already done so.

“The security situation across Ukraine remains violent and unpredictable due to ongoing military attacks by Russia, with active fighting in the country and uncertain security conditions. The US Embassy urges US citizens not to enter Ukraine and those in Ukraine to depart immediately using privately available ground transportation options if safe to do so,” the message said.

The embassy also asks Americans to avoid mass gatherings and organized events, as they can be targeted by the Russian military anywhere in Ukraine, including the western regions.

In addition, the US diplomatic service published instructions in the event of a missile attack:

“The security situation across Ukraine is extremely volatile and conditions can deteriorate without warning. US citizens should remain vigilant and take appropriate measures to increase their security awareness,” the embassy said.

Earlier, the State Duma of the Russian Federation called for an attack on government institutions in Kyiv and in particular the US embassy. There they believe that the supply of HIMARS launcher systems to Ukraine could bring World War III closer.

2 thoughts on “The emergency meeting of the Russian Security Council”