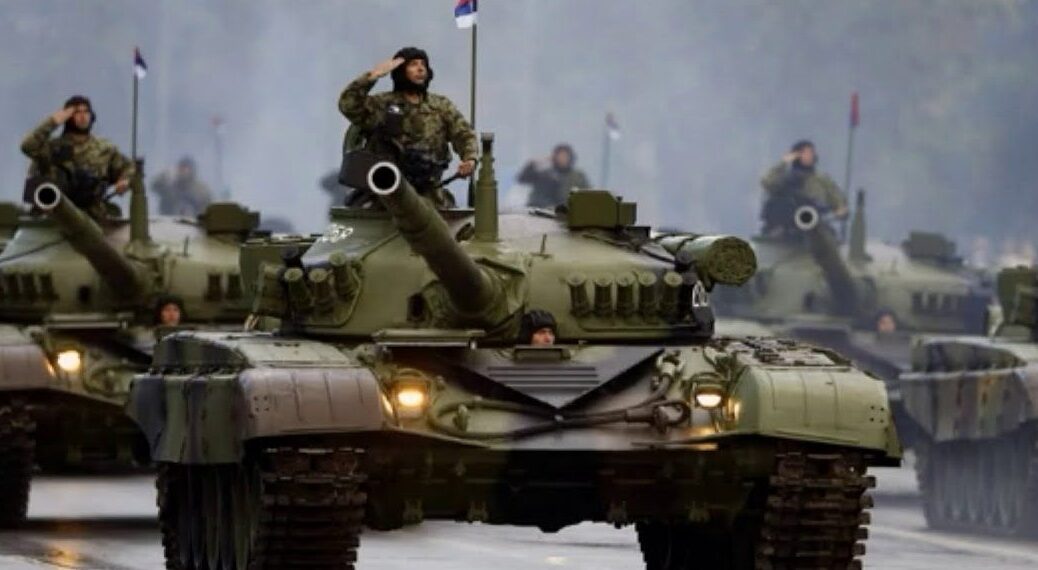 Imagine NATO backing up the Balkans equivalent of the Donbas (Kosovo) with bombs.

That’ s what happened.

Kosovo is ‘playing with fire’ – Moscow

Moscow is “alarmed” by the mounting tensions in Kosovo, which are the fault of “radical” ethnic Albanian authorities in the breakaway Serbian province and their Western sponsors, Russian Foreign Ministry spokeswoman Maria Zakharova said on Monday.

Authorities in Pristina have undertaken a “series of provocations” with the connivance of the US and the EU, using “ethnically motivated violence” to target the remaining Serbs in the province, Zakharova told reporters.

Prime minister Albin Kurti is seeking to distract from a failed domestic policy by “playing with fire, spinning up Serbophobic hysteria” and escalating tensions “closely approaching an armed conflict,” said Zakharova. Only the forbearance of local Serbs and the government in Belgrade is preventing things from sliding into open violence, she added.

“We stand in solidarity with the leadership of Serbia,” Zakharova said, endorsing Belgrade’s position that the Kosovo Albanians and the West “cynically ignore the fundamental UN Security Council Resolution 1244, the Brussels and Washington agreements.”

The UN resolution provided for a NATO presence in the province after the bombing of Serbia in 1999, while the 2013 Brussels agreement envisioned autonomy for the remaining ethnic Serbs.

UNSCR 1244 clearly provides for Serbia to send its security forces into the province, and “not even apologists for the ‘rules-based order’ can deny this,” Zakharova added. She specifically called out German Foreign Minister Annalena Baerbock’s recent statement that such a deployment would be “totally unacceptable,” which Serbia has slammed as “absurd.”

We will continue to help Belgrade defend legitimate national interests with regard to Kosovo based on UNSCR 1244, which remains in force without any exceptions.

Instead of pressuring the ethnic Albanians to abide by the signed agreements, the US and the EU have “blatantly sabotaged” the Brussels document, while preferring the “vicious practice” of bullying and blaming the Kosovo Serbs, Zakharova noted.

Last month, Brussels and Washington did manage to persuade Pristina to abandon its plan for outlawing Serbian license plates. The relative peace lasted less than two weeks, however, as ethnic Albanian police deployed in force in Serb-majority areas, harassing a kindergarten and a family winery.

Top officials in Belgrade and Berlin have clashed over Kosovo tensions 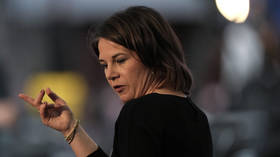 “In terms of international law and stability, based on which criteria do you decide which [UN Security Council Resolutions] must be respected, and which must be ignored? … Stunning level of absurdity,” Brnabic tweeted on Sunday night.

Under Resolution 1244 of the United Nations Security Council, Brnabic noted, Serbia has the right to send military and police personnel to Kosovo in certain situations, including in the event that the “peaceful and normal life” of its population there becomes threatened.

The importance of adhering to the respective UNSC resolutions in addressing “each and every problem” was also emphasized at the G7 foreign ministers’ meeting in May – and yet when it comes to Serbia, Germany is now “explicitly saying that the UNSCR 1244… should be ignored,” according to Brnabic.

President Aleksandar Vucic announced on Saturday that Serbia will request that its forces be deployed to Kosovo amid an Albanian-led crackdown on the province’s Serb population, even though he had no doubt that NATO would reject the plea. On Sunday, Belgrade allegedly received assurances from the Kosovo Force (KFOR) that it would not take “violent actions” against demonstrators.

Baerbock called Belgrade’s statements provocative, while praising Pristina for allegedly doing its best to defuse tensions. “Recent rhetoric from Serbia did the opposite. Suggesting sending Serbian forces to Kosovo is completely unacceptable,” she said.

The latest standoff in the predominantly Serbian northern Kosovo was sparked by the arrest of a former local police officer accused of attacking an ethnic Albanian law enforcement patrol. Over the weekend, protesters erected barricades, with the authorities in Belgrade accusing the EU and other Kosovo backers of neglecting the grievances of local Serbs and only “paying attention… when they are on the barricades.”

Vucic urged Serbs in northern Kosovo to “be calm and peaceful and not to fall for provocations,” and especially refrain from any aggressive moves against EULEX and KFOR, the EU- and NATO-led missions stationed in Kosovo.

Operation “Pristina Dawn” by the Serbian Army: On the border with Kosovo the first 5,000 Serbian soldiers – General alert in the country

The Serbs are ready to enter Mitrovica!

Code “Pristina dawn”: This is the name given by the Serbs to the upcoming special military operation in Kosovo. If nothing changes dramatically in the next few hours, then for the first time since 1999 the Serbian Army will enter Mitrovica and Kosovo.

Both the Serbian Army and the country’s Police are on general alert. Special forces of the Police together with forces of the Army were ordered to start from Belgrade to the administrative line with Kosovo.

At the same time, Serbian forces and especially the 63rd Airborne Brigade have been deployed along the administrative border with Kosovo along with Pantsir S1 and FK-3 anti-aircraft systems which have been moved into dispersal positions putting all of Kosovo within range.

The FK-3 anti-aircraft system, an export version of the HQ-22, was delivered in April by China.

Tonight we reach the point of no return. Kurti is currently preparing to attack northern Kosovo and wipe out the Serbs.

The president of Serbia, A.Vusic, said for his part:

“We will not surrender. Serbia will win. We will never forsake our brothers.

All Serbs are ready to give our lives for our homeland. For the first time since the breakup of Yugoslavia I see the Serbian people so united. I am proud and grateful. :

Pristina and the Americans systematically violate all agreements signed on Kosovo. I call on Albanians and Serbs to preserve peace in Kosovo”

The United States and Kosovo do not comply with either the UN Charter, the UN Security Council resolution, the Brussels Agreement, or the Washington Agreement, Serbian President Aleksandar Vucic said .

The Russian ambassador to Serbia emphasized that “the situation around Kosovo is “at ground zero. A heated stage of confrontation is likely to follow”

Finally, all schools in northern Kosovo were instructed not to open until further notice.

5,000 Serbian soldiers on the border with Kosovo

Serbian sources report that 5,000 soldiers have already been deployed on the border with Kosovo.

“Serbia has begun to move massive troops to the border with Kosovo.

We are mainly talking about armored vehicles and armored personnel carriers, which are currently on the border with Kosovo.

The possibility of starting a war between Kosovo and Serbia for the first time is at the highest level”.

Intervention of Albanian forces against Serbs

According to sources from the Russian Telegram, “a large group of Albanian special forces from the ROSU unit captured a Serbian hydropower facility near Gazivode. A total of 12 armored Renault Sherpas, jeeps, Hummers and Toyotas took part.

“During the attack, the staff looking after the hydroelectric plant were beaten and dismembered while the flag of the Republic of Serbia was destroyed. In Zubin potok the situation is tense. Serbian roadblocks have been placed around Leško, Leposavic and Rudar. Despite the bad weather, the barricades are strong with many participants. Heavy machinery, dump trucks”.

This is the main source of water for the Serbs. Most of the lake is located in the municipality of Zubin Potok, which is inhabited mainly by Serbs, as are three other areas in the north of the region.

Kosovo Serbs who have set up roadblocks because of Pristina’s actions will create a crisis headquarters in the northern part of the region, said Goran Rakich, head of the largest Serb party, Serbian List.

The leader of the “Serbian list” previously called on the Kosovo Serbs to maintain peace and tranquility and allow the movement of EU (EULEX) and NATO KFOR forces in the north.

“Tensions are not decreasing. We are located in Rudare village near Zvechan. More and more people are gathering. Today’s statements by Albin Kurti ignited the fire. He scared our families, but the citizens do not want to give in to his challenges,” Rakich told TV Pink on Sunday night.

“We will form a crisis strategy that will inform citizens and the media about the situation on the ground. I urge citizens, given the high degree of tension resulting from Pristina’s threats, to be peaceful and restrained, but also vigilant,” said the Kosovo Serb representative.

Soldiers of the special unit of the “Ministry of Interior” of the self-proclaimed Republic of Kosovo seized an object at the Gazivode Dam on Sunday, where they removed Serbian flags and set up a Serbian guard.

Violent attack by Vucic on USA for the situation in Kosovo

The United States and Kosovo do not comply with either the UN Charter, the UN Security Council resolution, the Brussels Agreement, or the Washington Agreement, Serbian President Aleksandar Vucic said .

Vucic, after the meeting of the National Security Council, said: ” We have a question for our American partners. Tell us which agreement does Pristina adhere to and which act do you adhere to?’

“Today is the hardest day for me since I became president, maybe the hardest night to come. We have our backs against the wall ,” Vucic said.

The army has been put on alert and Serbian special forces are heading for Kosovo.

“Army and police are ready for any order. But we will try to contain the people at all costs,” he said.

The President added that Belgrade has guarantees from KFOR and the European Union that violence will not be used against protesters in Kosovo and Metohija.

See images of the roadblocks and the Serbian Security Council convergence 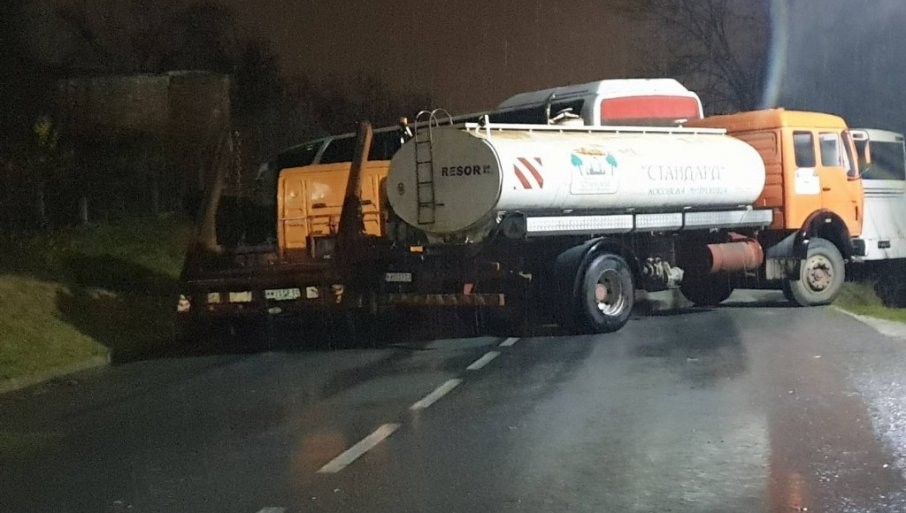 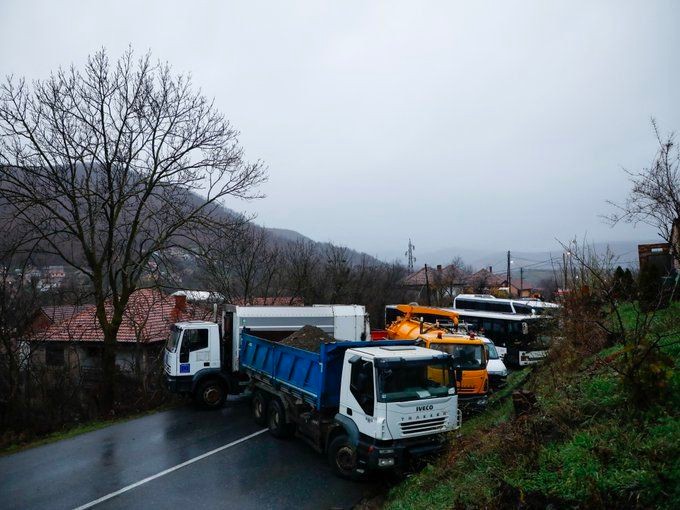 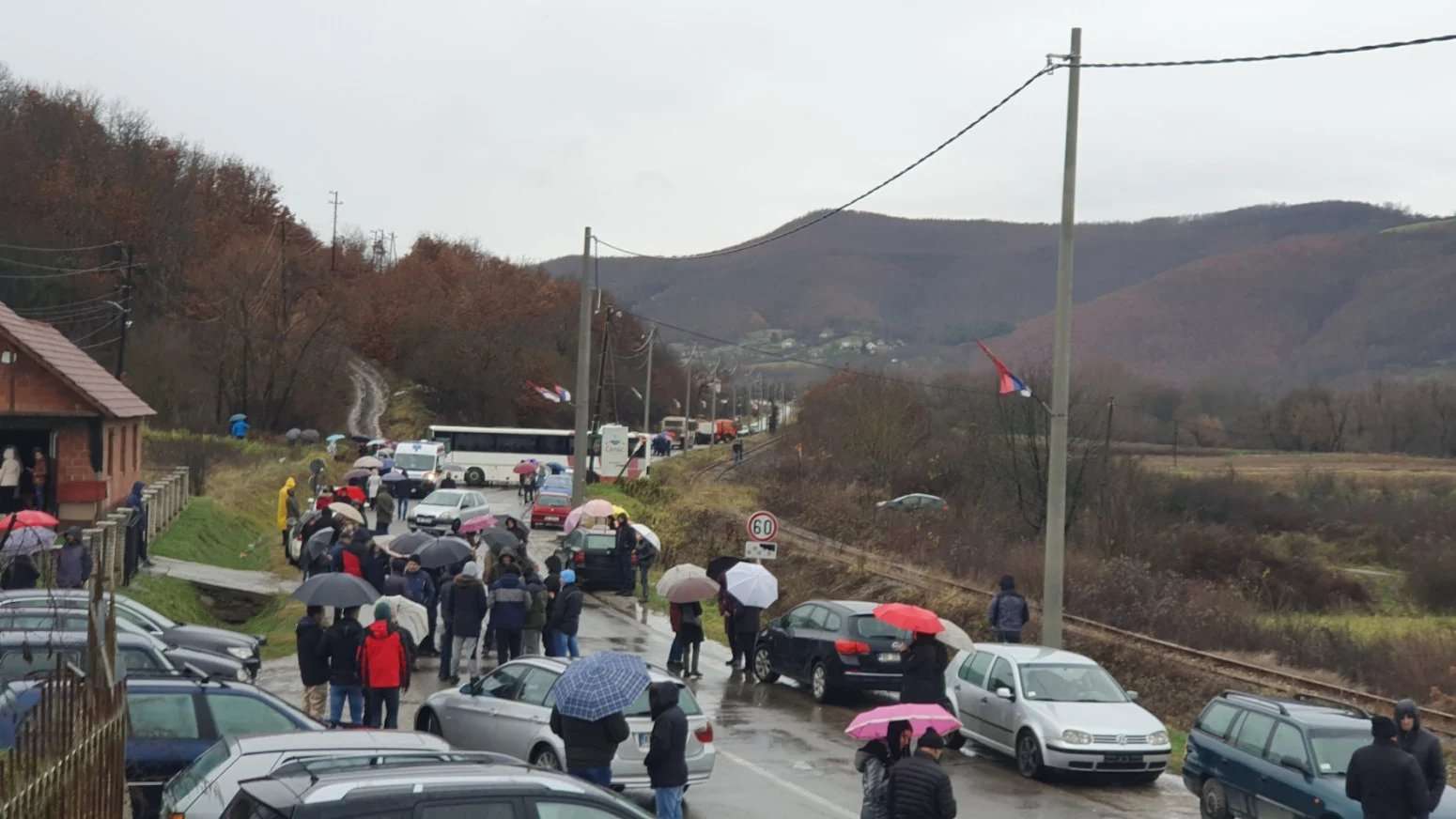 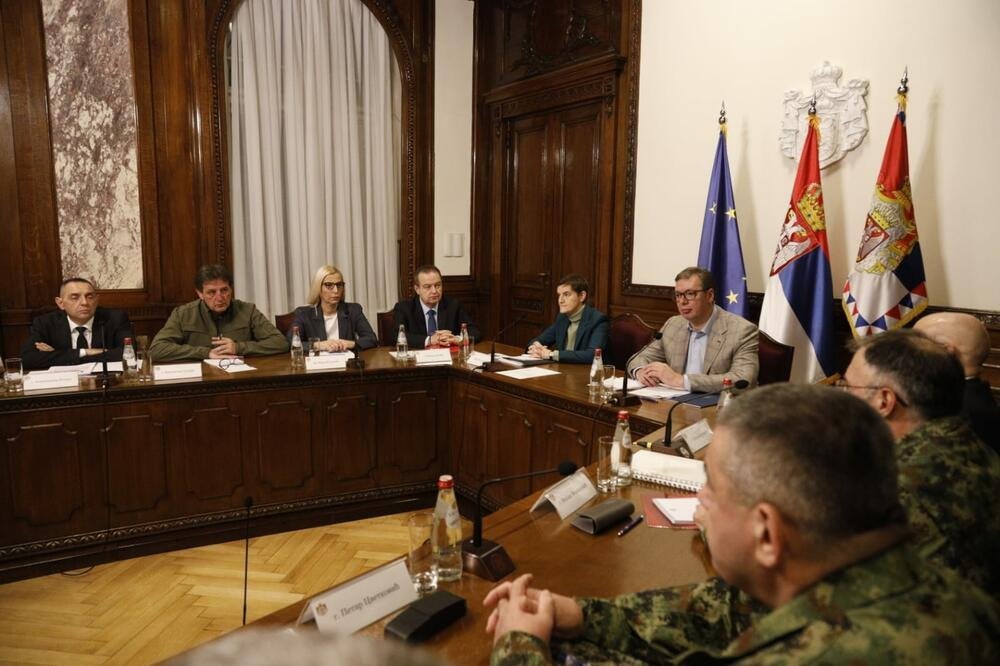 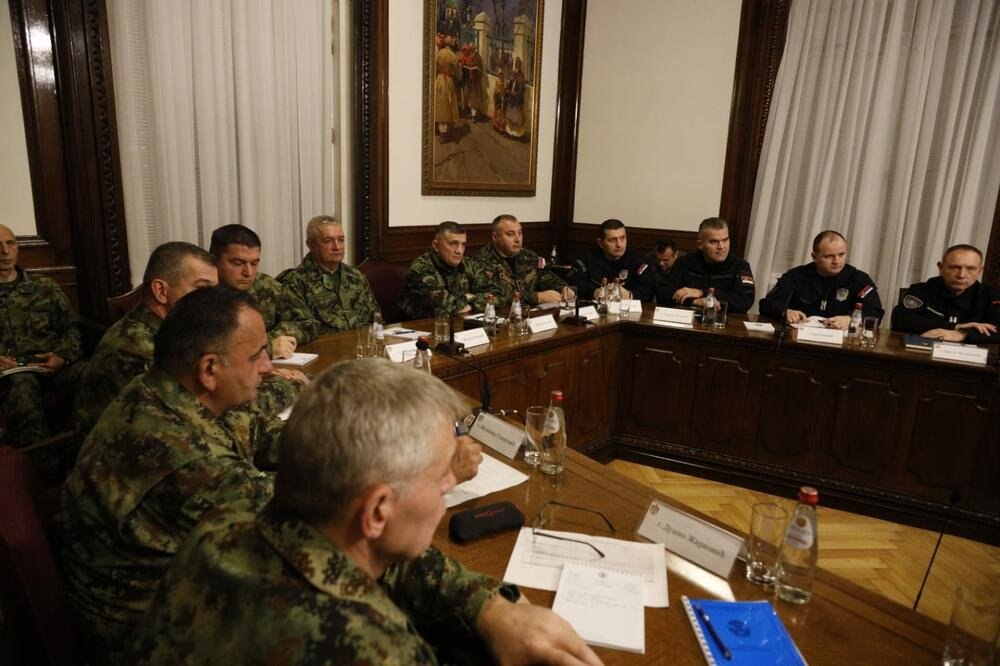