(Natural News) DISCLAIMER: This author owns zero cryptocurrencies. We fully support the concept of decentralized currencies and the promise of private, peer-to-peer transactions. We affirm that central banks are the source of tremendous evil, corruption and mass suffering across the planet. Yet we have become aware of a shocking truth in the current crypto ecosystem that cannot be swept under the rug. As this story reveals, it appears the crypto ecosystem has been erected as a giant trap built on systematic counterfeiting. Thanks to certain players in the ecosystem, crypto has largely become “digital fiat currency” with the same kind of unlimited money printing that we were all trying to get away from. Read this story, watch the videos and see for yourself…

Silver guru David Morgan has released a video series called the Crypto Conspiracy. This series is available at The Morgan Report channel on Brighteon.com, shown here:

Please consider this video series a must-see series covering Tether, Bitcoin, Evergrande and even the Epstein connection to the origins of Bitcoin. In this series, David Morgan interviews John Perez who shares bombshell information that could reveal the end of the crypto ecosystem as we know it.

John Perez told me today, “The connect to Epstein is mind-bending and it’s impossible to hide. It’s right out in the open. This story is going to lead to the biggest conspiracy in the history of mankind.”

Tether, stablecoins and the crypto ecosystem

To understand the magnitude of the “crypto conspiracy,” you need to first grasp what Tether is, and how Tether coins are used to purchase the vast majority of Bitcoin (about two-thirds). Tether is called a “stablecoin” and the Tether company — based on Hong Kong under China’s control — once claimed to have $1 in USD assets for every Tether coin that was created.

A criminal investigation into Tether and Bitfinex by the NY Attorney General concluded that claim was a lie. Via NY AG’s February 23, 2021 press release:

In the case of Tether, the company represented that each of its stablecoins were backed one-to-one by U.S. dollars in reserve. However, an investigation by the Office of the Attorney General (OAG) found that iFinex — the operator of Bitfinex — and Tether made false statements about the backing of the “tether” stablecoin, and about the movement of hundreds of millions of dollars between the two companies to cover up the truth about massive losses by Bitfinex.

“Bitfinex and Tether recklessly and unlawfully covered-up massive financial losses to keep their scheme going and protect their bottom lines,” said Attorney General James. “Tether’s claims that its virtual currency was fully backed by U.S. dollars at all times was a lie.”

The OAG’s investigation found that, starting no later than mid-2017, Tether had no access to banking, anywhere in the world, and so for periods of time held no reserves to back tethers in circulation at the rate of one dollar for every tether, contrary to its representations. In the face of persistent questions about whether the company actually held sufficient funds, Tether published a self-proclaimed ‘verification’ of its cash reserves, in 2017, that it characterized as “a good faith effort on our behalf to provide an interim analysis of our cash position.” In reality, however, the cash ostensibly backing tethers had only been placed in Tether’s account as of the very morning of the company’s ‘verification.’

This is just the beginning of the story on Tether, Bitfinex, Bitcoin and the crypto ecosystem, however. This rabbit hole goes so much deeper, and anyone involved in crypto at any level needs to take a serious look into the 2021 revelations about Tether and the accusation of “digital fiat currency” or what’s also being called “crypto counterfeiting” by some analysts.

On YouTube, Stoic Finance has provided some very intriguing coverage of all this. A recent video from Stoic is found here, covering the crypto plunge, China’s debt implosion problems and more:

Another YouTube channel that’s worth seeing is called Coffeezilla, and it covers various crypto scams and “influencer” payola schemes, mostly in a millennial video style for younger viewers. In this video, Coffezilla exposes Tether, which he calls, “Bitcoin’s biggest secret.” The first several minutes of this video are a bit slow, but it really gets going around minute 20 or so:

In addition to these video channels on YouTube, the David Morgan Crypto Conspiracy videos feature John Perez, an investigator who has been digging into the Tether story and Tether’s links to communist China. You’ll hear more from Perez in the coming weeks.

It appears that the crypto ecosystem is a mass counterfeiting operation

In the aggregate, the bombshell findings that are being uncovered by these individuals are simply horrifying. It appears that a mass crypto counterfeiting operation has been under way for years, creating “counterfeit” crypto coins that are used to buy up Bitcoin, Ether and other coins across the crypto ecosystem. There is irrefutable evidence of the criminality of such operations (see the NY AG document above), and it appears that the “valuations” of the crypto ecosystem are largely fictitious.

Based on these revelations, it appears that the vast majority of the crypto ecosystem is a global counterfeiting scheme that’s headed for a “crypto reset” once the fraud is fully exposed. While many people are buying crypto with cash, other players simply “create” coins out of thin air and use those to purchase Bitcoin, Ether or other popular coins. They then sell those coins for cash (such as USD), thereby transferring greenback fiat currency into their own hands by simply counterfeiting digital fiat from the start.

As a result of these revelations, many analysts believe that once the full extent of the digital fiat currency creation is fully revealed, Bitcoin and other crypto assets may experience a significant wipeout. Here’s a video on Brighteon.com that asks the question, “Is Bitcoin About To Crash 95% ? (Tether Bitcoin Manipulation)”

So far, it seems, most people involved in crypto have been willing to look the other way on Tether because they all seem to be “making money” as the crypto bubble rises. But with Bitcoin having plunged 17.5% in mere hours last Friday night — and with many cryptos now suffering sustained selloffs — the overpowering elation of an ever-rising market seems to be waning. Many people are beginning to ask serious questions about the current valuations of Bitcoin and other cryptos, and the deeper they dig, the more disturbing the picture becomes.

The Maxwell trial is bringing all sorts of craziness to light, and Epstein is tied to the origins of Bitcoin

As David Morgan’s Crypto Conspiracy series reveals, Bitcoin’s origins are tied to Jeffrey Epstein, a deep state operator linked to pedophilia and child sex trafficking in order to ensnare bureaucrats and the wealthy. It appears that Bitcoin was likely a creation of the deep state, used as a money laundering, bribery and payoffs network so that the world’s pedophile wealthy elite could move money outside the conventional banking system. This would make Bitcoin something akin to a “Pedo Coin” in terms of the motivations behind the deep state setting it up.

One reason all this is garnering intense attention right now is because of the accelerating default of Evergrande, the Chinese Ponzi property developer that’s now defaulting on its bond payments to investors.

Last Friday, Evergrande issued a letter to investors, stating that the company was unable to meet its payment obligations to bond holders. This is essentially a statement of default, although the status of financial “default” has not yet been fully invoked against Evergrande (it’s coming soon). Here’s an image of the letter, which the corporate media has been desperately working to hide from the public: 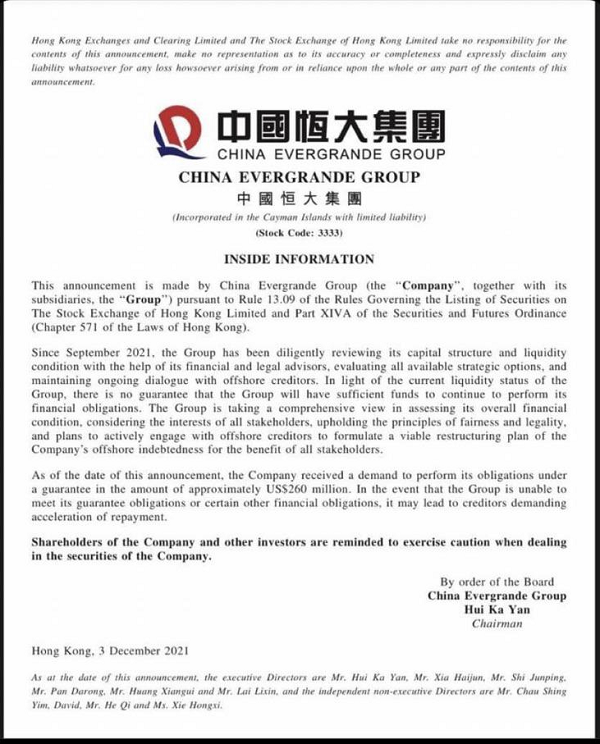 As the letter states, “In light of the current liquidity status of the Group, there is no guarantee that the Group will have sufficient funds to continue to perform its financial obligations… The Group… plans to actively engage with offshore creditors to formulate a viable restructuring plan of the Company’s offshore indebtedness for the benefit of all stakeholders.”

In essence, this letter admits that Evergrande cannot meet its payment obligations. It will now attempt to “restructure” its debt with bond holders, but this is unlikely to succeed at any real scale, given the $300+ billion that Evergrande owes (combined with news of the entire property Ponzi scheme going bust).

As a result, we believe Evergrande is already in a state of financial default. The global media is trying to cover it up as long as possible, but it’s only a delaying tactic. It won’t take long before Evergrande’s total default is cemented in the financial markets, unleashing ripple effects across the global financial ecosystem.

What does this have to do with Tether and Bitcoin? Many analysts believe that a significant portion of Tether’s claimed “assets” are actually Evergrande debt paper. Tether openly says they count “receivables” as assets, meaning Tether loans money to corporations or other entities, then counts the receivables as hard assets backing its Tether stablecoin.

Obviously, if Evergrande defaults, then any exposure that Tether has to Evergrande blows up almost instantly.

Over two-thirds of Bitcoin is purchased with Tether. If Tether goes belly up, Bitcoin (and other cryptos) craters as well. I call this the digital global reset, or the “crypto reset.” And many analysts are now sounding the alarm on all this like never before.

Don’t forget that globalists have long been planning a fiat currency “global reset” involving central bank fiat. But now, it seems a crypto reset may be engineered as well. If so, then as this global reset rolls out, anyone sitting on dollars is going to be wiped out, and anyone holding overpriced crypto would be largely wiped out as well.

Very likely, the only safe place to be in all this is sitting on physical gold and silver (or land / other hard assets), watching the world of fiat currency and digital fiat currency collapse.

There’s much more coming on this story… get the latest in today’s Situation Update podcast. Tomorrow I will post a new, bombshell interview with John Perez who has huge breaking news just coming in over the last few hours (as of Monday afternoon). This is a fast-moving story: