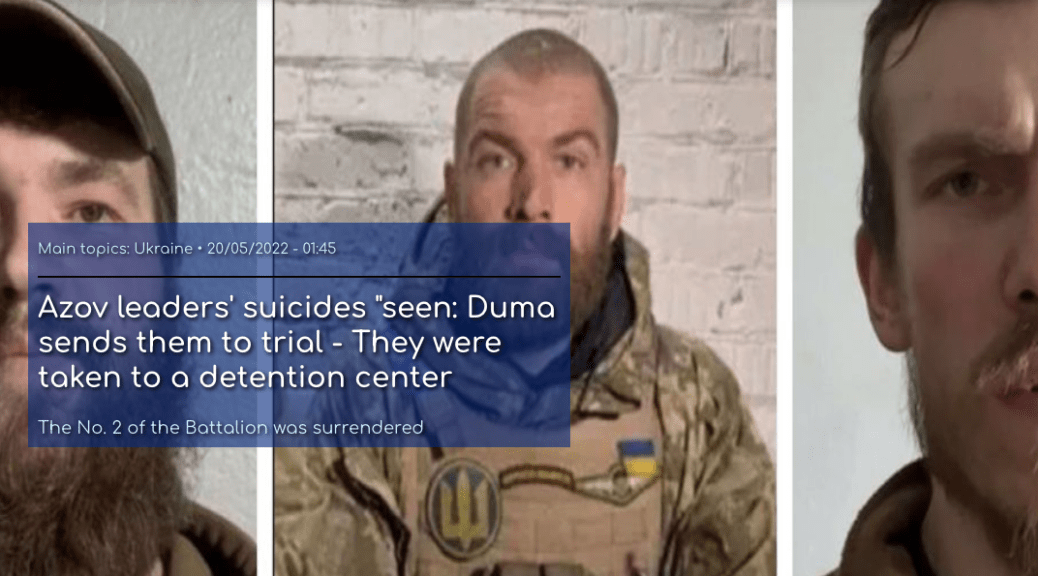 All I can do is shake my head in disbelief. The Kiev regime is some kind of kindergarten at the edge of an abyss. I mean, whatever, they can lie however much they want—it’s war, after all, and though lying works against you, eventually, it’s not verboten. But why make fools of themselves in the process?

“The office of the President asked the defenders [of Azovstal] to hold out for the last few days so that we could win Eurovision and raise this topic in front of the West, after which the process of surrender began.”

@Rezident_UA claims: “The Russian troops in Mariupol knew about the situation at Azovstal, that there was a minimum of food, there was no water and the BC was running out, as well as about the psychological state of the fighters, who were covered every day with constant bombardments and artillery strikes. The days before the complete capture of the plant were numbered, resistance was minimal, and the cleanup of one of the two main workshops had already begun. The office of the President asked the defenders to hold out for the last few days so that we could win Eurovision and raise this topic in front of the West, after which the process of surrender began. Telegram channels belonging to Vova Petrov’s network began to write to the propagandist that all this was staged and no one would give up. None of the LOMs close to Bankova was informed so that the information would be airtight. Negotiations with Putin were mediated by Erdogan and were not completed at the time of the surrender of the defenders of Azovstal, this is the reason for the silence of the President and the speakers of the Presidential Office, who do not understand how the case with the exchange of prisoners will be implemented.”

The speculation about the reasons for the propitious surrender at Azovstal points to the fact that the Ukrainian troops simply ran out of water. While they were able to feed a couple of units to keep them battle-ready and create the appearance of activity at the complex, the rest starved. However, it was running out of water that finally made them break. For a while, they still had “technological water”—I.e. water kept at Azovstal for manufacturing processes, but that eventually ran out, and here we are.

Azov leaders’ suicides “seen”: Duma sends them to trial – They were taken to a detention center

The No. 2 of the Battalion was surrendered

The Russian Duma has decided to block any exchange of Azov fighters and send them to war crimes trials. Already 89 Azov members surrendered to the Azovstal plant have been transferred to a detention center in Taganrog, Russia.

The majority of those transferred to Taganrog were found with tattoos of the SS divisions “Galicia” and “Totenkopf”.

Earlier, representatives of the Red Cross and Ukraine visited the detention center where Azov members are being held.

The Russians talk about “possible suicides” of the two leaders of the Azov Order.

The leading team of the Azov Order consists of Kalina, Volyn and Radish known as Denis Prokopenko. There are already reports that the first one was handed over. But not the other two.

“Ukraine says the surrender of the forces of the Nazi Azov Order is the first step towards their release through exchange with other prisoners.

It is clear that the exchange of even one of these criminals will be considered a victory for Ukraine by the Collective West.

“I consider it necessary to adopt a resolution or a law that prohibits the exchange of either any Nazi criminal who participated in the death of civilians or those who have Nazi tattoos,” said the Duma member.

“Thank you Anatoly Alexandrovich. Prepare the protocol instructions according to our regulations.

To work together with the Committee on Defense and Security.

You made the right suggestion. Nazi criminals should not participate in an exchange.

They are war criminals. We will do everything to bring them to justice “ said the Speaker of the

The No. 2 of the Azov Battalion surrendered

However, a military commander from Donetsk said that Kalyn “should not have surrendered, but should have shot himself.”

Will they commit suicide?

Russian military sources say there are reasonable suspicions that some of Azov’s leading group do not want to surrender and are considering either continuing to hide in underground tunnels or committing suicide.

” Before being taken prisoner, the Nazis smashed their phones and tablets to avoid finding evidence that would make it easier to prove their guilt in war crimes,” said Alexander Khodakovsky, the founder of Donetsk’s Vostok Battalion.

Military Commander Yuri Kotenok estimated that in two days about 1,600 Azov fighters had already surrendered . Thus, “there remains a minority” including the leaders of “Azov”, “Volyn” and “Radish”.

Theoretically, I understand that one of the “Banderas trio” does not want to surrender alive to the “cursed Muscovites” yet and will try to commit suicide. Why do it? “For example, out of fear,” says the military commander.

The scenario of the suicide of the leaders of “Azov” is confirmed by the phrase of the former head of the Ministry of Internal Affairs of Ukraine, Arsen Avakov.

Avakov posted a joint photo with one of Azov’s commanders, urging him to save his life and promising that Vladimir Zelensky, through negotiations and Western aid, would release them.

“I want to tell you, warrior Radish, hero-commander – to tell you right away… that you have not drunk the cup of trials yet, and perhaps the most difficult is coming… Live and become stronger! “Ukraine will fight for you, each of us. Ρίζ I know for sure that President Zelensky has been personally involved in the fate of this glorious military guard day and night ,” Avakov wrote.

Lost Ground Can Be Recaptured—But Dead Soldiers Are Forever