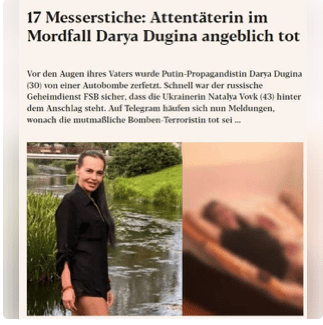 The female member of the Ukrainian National Guard, Natalya Vovka, who entered Russia on July 23 and moved into the same building as Darya Dugina, stalked Darya, and planted a bomb to murder Darya by blowing up the car she was driving, has been found stabbed to death in a hotel in Austria.

This is NOT confirmed – yet – by any authoritative source.

1. Asset Natalya Vovk is declared dead. Gets a new ID. Removed to some obscure latitude. Won’t be pursued by Russian intel.

2. Those that instrumentalized the patsy – and she was merely the fall girl – are doing the clean-up. Dead patsies don’t talk.

3. Russian intel knocked in the middle of the night.