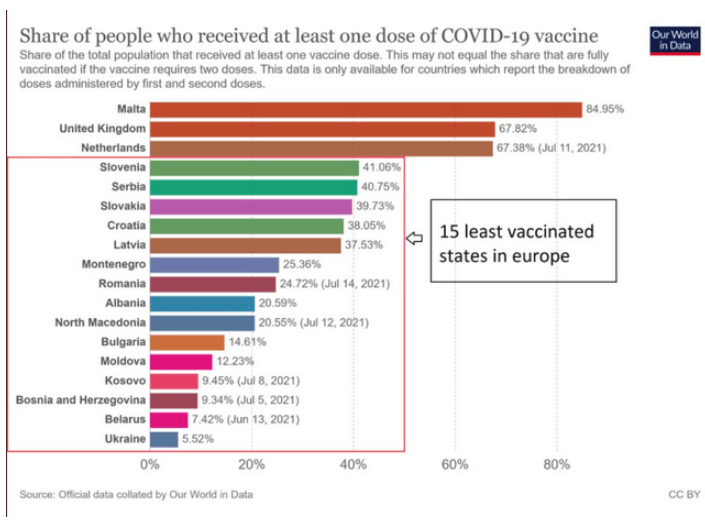 The Delta variant makes it increasingly clear: There is a direct connection between the proportion of vaccinations and the number of corona cases. And it looks like there are superspreaders, especially among the vaccinated.

Machine translated from the German

The Israel Ministry of Health data shows that of the cases now identified, the percentage by age group corresponds to the percentage that was vaccinated. The vaccination doesn’t seem to be helping at all. The share of vaccinated people in the positive tests was last at 54 percent, Immune due to a previous infection, on the other hand, are hardly affected at all and make up just 1 percent. The unvaccinated contribute the rest of 45 percent.

The director of the Infectious Diseases Department at Sheba Hospital, Prof. Galia Rahav, commented : “Compared to the vaccinated, almost no recovered COVID-19 patients are re-infected. Illness-induced immunity is likely to be much more effective than a vaccine. “

The hospitalization rate among the sick fell in Israel by about a third, as is the case in England. Case mortality decreased by about a factor of 10, according to data from Public Health England.

But it can also be clearly stated that the countries with the lowest vaccination rates in Europe are also least affected by the already relatively low number of infections. These are the countries in south-east Europe apart from Greece, which has very strict measures – such as an exit permit only with SMS messages – and which also has a high vaccination rate.

Belarus and Ukraine have the lowest levels of vaccinations. Belarus in particular, but also the Ukraine, have acted similarly to Sweden, and in some areas, such as full football stadiums, even more liberally. And also in the countries in Southeastern Europe the proportion of vaccinations is low up to a maximum of 25%.

Some countries, such as the larger successor states of the former Yugoslavia, as well as Latvia and Slovakia, approach 40 percent.

A particularly blatant example is Gibraltar. The agency had fully vaccinated every eligible citizen by April. Now, 2.5 months later, they have the third highest per capita infection rate on earth, with 80% of the cases occurring in the past two days being fully vaccinated.

The inventor of mRNA technology, Dr. Luigi Warren already referred to the mRNA vaccination with only a tiny part of the virus on Twitter and wrote:

” Some vaccinated people temporarily become virus superspreaders because of lymphocytopenia, ADE (infection-enhancing antibodies) or the fact that the vaccines only express a subset of the viral antigens.”

I also know of a case from Austria where a person who had previously been vaccinated twice infected several others in a training course. The Hotline1450 said that as a vaccinated person he was certainly not contagious. He is now symptomatic and PCR positive. The low Ct value of 18 suggests a fairly high viral load. Sequencing revealed delta variant. The doctor in the bra said that we now know that the vaccination is of no use at all.

What would make sense?

More and more top scientists and doctors are now calling for this experiment with genetic engineering preparations to be stopped. This is how Luigi Warren tweeted today:

Another possibility would be to switch to a whole virus vaccine, which is firstly a technology that has been tried and tested for decades, secondly would cause considerably fewer side effects and deaths, and thirdly, presents the whole virus to the immune system and can therefore form specific defense mechanisms against many more characteristics of the virus, similarly like a natural infection. Such vaccines are available, for example, from China – was also used in Serbia – and from the Franco-Austrian company Valneva.

However, these vaccines cannot produce sterile immunity either, since they are also injected into the upper arm and therefore cannot stimulate the immune system in the upper respiratory tract.

The politicians will surely come up with the idea of ​​prescribing a “booster” or booster vaccination. So planned in Israel. A larger shipment from Pfizer is expected to arrive again on August 1st. Those who have not yet been vaccinated should now have their turn and those at particular risk will receive a third vaccination. And that although we massively exacerbate the side effects of every further effect, further weaken the immune system and make vaccinated people even more susceptible to infections. If something doesn’t work, you just do more of the same.

Even the politicians in the Vienna Medical Association do not think further. In a circular from July 15, 2021, it says:

” Vaccination boosts for doctors and ordination
staff In the Doctors’ News of July 13, 2021, we informed you that due to the announcement by BioNtech / Pfizer that it would apply for the approval of a third booster vaccination, the Medical Association will advocate that all doctors concerned will receive these as soon as necessary. We want to make it clear that this commitment naturally also applies to the ordination staff. “

In a joint statement by the US authorities FDA and CDC (Joint CDC and FDA Statement on Vaccine Boosters), however, it says:

” People who are fully vaccinated are protected from serious illness and death, including the variants currently circulating in the country such as Delta.”

The intended effect is shown correctly here, protection against “serious illness and death” – but not against infection and mild to moderate illness. And further:

” Americans who are already fully vaccinated do not need a booster vaccination at this point.”

And if one would like to add that they should beware of a third vaccination, if you look at what is already happening to the vaccinated.