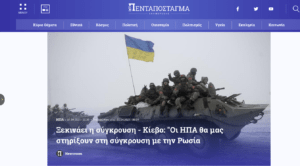 pentapostagma.gr
2 April, 2021
The American weapons systems of the Persian Gulf go to Donbass

The “gates of hell” are opening, as the Pentagon is fully confirmed, as the Americans give the “green light” to Kiev for an attack against the Russian-speakers!

Ukrainian Defense Minister Andriy Taran, after talks with his US counterpart Lloyd Austin, announced ” Washington ‘s willingness to provide military assistance to Kiev in the event of a military conflict with Russia ,” as we reported earlier today .

Taran says US has pledged military aid to Ukraine

” In the event of an escalation of Russian aggression, the United States will not leave Ukraine alone and will not allow the Russian Federation to pursue its aggressive ambitions against Ukraine, ” he said   .

At the same time, in Donbass, the mobilization for the 18-27 age group started!

President Joe Biden has ordered the Pentagon to begin removing Patriot missiles and military forces from the Persian Gulf region.

The move of the new US President aims at moving the military equipment to more key positions, specifically against China and Russia!

U.S. officials are considering proposals to remove additional military equipment from the region, in a bid to force Russia and China to retreat in the recent “bra-de-fer” diplomatic rampage.

Earlier in the day, Russian Foreign Minister Sergei Lavrov said that the outbreak of war in Donbas could lead to the collapse of Ukraine.

The Biden presidency begins with the United States coming to the forefront of international developments, in an effort to make up for its absence from the international arena under Trump.

US troops are on high alert in Europe over Ukraine!

pentapostagma.gr,
1 April, 2021
Moscow: “Kiev should not make a mistake” – Video

As the Pentagon has been reporting for days, NATO and the US will be active in the conflict that is taking place between Russia and Kiev.

Thus, the European Command of the US Armed Forces, raised the level of alarm, due to the situation in Donbas. In addition, the Pentagon records the military activity of the Russian Federation in Eastern Europe and the Arctic.

At the same time, the representative of the European Administration of the United States (EUCOM) Wendy Snyder, said that the death of four Ukrainian soldiers in Donbass, as well as the accumulation of Russian troops on the border with Ukraine, is a challenge for the United States.

” The deployment of Russian troops has alerted us as the war crisis draws to a close. ”

The images with the movements of the Russian troops caused panic in Ukraine. Today, the Central Intelligence Agency of the Ministry of Defense of Ukraine announced “that Russia is planning a deep attack on Ukrainian territory.”

” Russia intends not only to expand its military presence in the territory of the Donbass Republic, where regular Russian military units will be established to protect Russian citizens, but to go even further into Ukrainian territory ,” he said. Statement by the representative of the Ministry of Defense of Ukraine.

Meanwhile, the President of Ukraine will convene a National Security and Defense Council tomorrow, according to Ukrainian media!

“Russian Foreign Minister Sergei Lavrov said on Thursday that any attempt to launch a new military conflict in eastern Ukraine could lead to the destruction of the whole of Ukraine,” TASS news agency reported.

The comments come amid tensions. when the Chief of the Armed Forces of Ukraine this week accused Moscow of transferring forces near their common border and also said that pro-Russian separatists were systematically violating the ceasefire.

The Kremlin said earlier that “the recent movements of Russian troops and equipment near Russia’s border with Ukraine are aimed at ensuring Moscow’s security and pose no threat to anyone .”

“The movement of Russian troops across the country should not concern other states, as this does not threaten them,” Kremlin spokesman Dmitry Peskov said on Thursday, commenting on the Ukrainian military’s observation of the military build-up of Russian troops in along the border with Ukraine.

” The Russian Federation is transferring the Armed Forces to its territory as it wishes. This should not concern anyone and this is not a threat to anyone ,” Peskov said.

Russian military: “Kiev is waiting for an order from the House to attack Donbass”!

Moscow is taking ” all necessary measures to ensure the security of its borders, ” he said. Peshkov also noted that “Russian troops have never participated and are not involved in armed conflict on Ukrainian territory.”

“We, and European countries and all states, would not want the civil war in Ukraine to flare up as a result of provocative steps by the Ukrainian army,” he said.

From the above we see a clear position on the part of Russia on the issue of Ukraine, which consists in ” I do not want a war in Dobas, but if Ukraine attacks me I will destroy it completely .”

In essence, Russia is “putting its red line” on the Dobas issue, both in Ukraine and in the US-NATO-EU.

Finally, the concentration of Russian forces on the border with Ukraine is, of course, a serious indication of the intentions and readiness of the Russian Armed Forces.