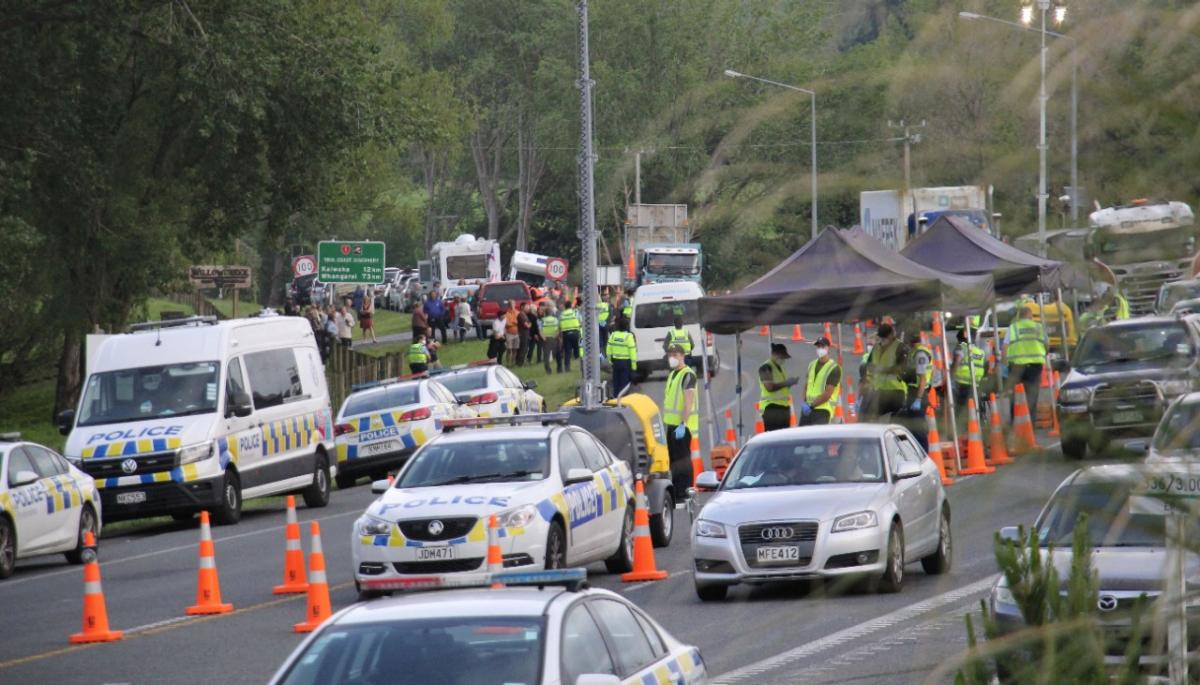 This was the call for a Hikoi

The shot heard around the world!

Ngapuhi is calling for help from all of those who value freedom & liberty.

If you have had enough, Carlene Hereora is rallying the troops to support the effort to prevent the continued rollout of draconian legislation across this country.

The Sovereign Hikoi of Truth has reached the Auckland border and they are holding the line. [Who knew we had borders and domestic travel permit checks in little old New Zealand?]

This inspirational, heartfelt speech of unity and haka needs to go global.

The world needs to know that the people of NZ are uniting and will not follow the dictates of a government whose Prime Minister sanctions apartheid and promotes division.

At Weeks End News are there to witness and report.

Nothing can stop what is coming!

SHOT • THIS IS OUR MOMENT KIWIS!

The numbers are building in all areas.

Our nation’s future is decided today.

At one of Auckland’s Northern Border checkpoints police are refusing to let the Soverign Hikoi of Truth travellers pass on their way to the sacred Waitangi.

Notice is served on the police by the the free loving men and women of this land for right of thoroughfare under common law.

As witnessed by At Weeks End News.

Nothing can stop what is coming!

This is the latest update I have (via Telegram)

THE LINE IS BEING HELD 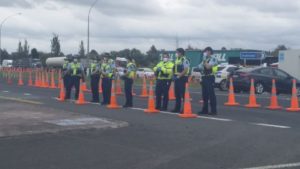 People are holding the line at the border south of Auckland as they won’t give up on their plan to attend Waitangi for the Declaration of Independence Day talks with elders who they have a grievance with.

There are a good number of people standing strong and their spirits are high.

Reportedly there are 1,000 people getting ready to be welcomed on to the grounds by powhiri.

The police are said to be heading to Waitangi to talk with the organisers.

The latest information indicates protestors have been welcomed onto the marae at Waitangi, despite being told they were unwelcome 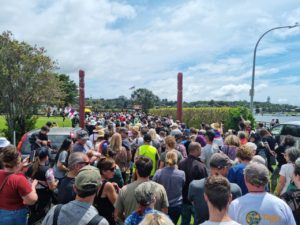 “Seems like the arrival was openly accepted by those at Waitangi…therefore. Hone is a traitor to his people for denying a hikoi.”

From the lamestream media

Members of a widely condemned anti-lockdown movement attempting to ‘hīkoi’ into Northland have been barred by the police at Auckland’s northern and southern borders.

There was a stand-off between officers and supporters of the self-proclaimed ‘Hīkoi of Truth’ movement at Auckland’s northern checkpoint at Te Hana earlier on Wednesday morning, with protesters attempting to cross the alert level boundary into Northland. The group has since been dispersed by the police.

Meanwhile, another group of protesters are standing their ground at the southern checkpoint at Mercer, situated along the Waikato-Auckland border, after arriving late on Tuesday night. They have been barred from crossing the border by the police, but have refused repeated requests to leave the area. Officers are currently attempting to engage with the drivers of two vehicles, which have been parked on State Highway 1 in the northern lanes.

The group of protesters remain on the side of the road near the southern checkpoint and police are monitoring the situation for the safety of everyone involved, a spokesperson said on Wednesday morning.

The stand-off has resulted in long queues of vehicles attempting to enter Auckland, with traffic now reportedly at a standstill leading up to the checkpoint. Motorists have been warned to expect delays.

Participants of the ‘hīkoi’ – a communal march typically as a form of protest – are aiming to travel to Waitangi in the Northland region to gather in the name of “freedom”.

The Sovereign Hīkoi of Truth (SHOT) movement was formed to “bring to light the truth”, according to a press release issued on Monday, with its supporters rallied around the common value that New Zealanders are “all free” and “entitled to live in freedom”.

“Free to travel, free to live without medical discrimination, free to gather and free to demonstrate our own self-determination as living, breathing divine beings,” the statement says.

A convoy of around 50 vehicles and roughly 100 people arrived at the southern checkpoint in Mercer shortly before midnight – despite an earlier warning from police that no one would be permitted to cross the border without an exemption.

As Auckland remains under alert level 3 restrictions due to the outbreak of the highly infectious Delta variant of COVID-19, travel into and out of the region is highly limited. Anyone wishing to enter or leave Auckland must have an exemption proving their travel is essential for personal or work-related reasons. Police told Newshub on Tuesday they are aware of the protest and participants are strongly advised that any travel across Auckland’s boundary requires an exemption.

“Those who are found to be deliberately breaching alert level restrictions can expect to face enforcement action,” the spokesperson told Newshub.

The AM Show reporter Aziz Al Sa’Afin said on Wednesday morning that the protesters at Mercer had been directed into a paddock by the police after they initially blocked the southern motorway.

A Newshub cameraman at the southern border on Wednesday morning said the small group appeared to be sitting on the Waikato side of the boundary.

In a statement later on Wednesday morning, a police spokesperson confirmed the protesters, who had been blocking the road, were directed by officers to a gravel area on Orams Rd to prevent disruptions to traffic. Most complied, but the drivers of two vehicles – including a bus – refused to move after parking in the northern lanes on State Highway 1 (SH1).

At around 2.30am, some of the protestors surged forward on foot from Orams Rd, blocking the southern lane of SH1. Police negotiators and Iwi Liaison Officers encouraged the group to move away from the road, but they refused. Around 30 minutes later, a police line was used to back the protesters off the highway, the spokesperson said.

Te Rūnanga o Ngāti Whātua, the representative body corporate established to deal with issues affecting Ngāti Whātua iwi, has urged the group to hold off on the ‘hīkoi’ until the end of lockdown.

Ngāti Whātua spokesperson Antony Thomson has pleaded with the protesters to go home, saying now is not the time to breach COVID-19 restrictions.

“We’re trying to keep COVID within Tāmaki [Makaurau] – inside Auckland,” he told Newshub on Wednesday morning. “The only way we’re going to do that is working together.”

Northland needed time to protect its whakapapa, he said.

“We’ve got seven confirmed cases in Te Tai Tokerau at the moment. Our real concern is the low vaccination rates – we need to protect the north by containing and maintaining a strong wall around COVID-19.”

Former Te Tai Tokerau MP Hone Harawira, the spokesperson for the iwi-led Te Tai Tokerau Border Controls, also condemned the timing of the march on Tuesday, saying the movement was a “scam”.

Speaking to Newshub on Wednesday morning, Waikato Mayor Allan Sanson slammed the protesters, urging all participants to leave the Mercer area and return to their homes.

“You need to go home from where you’ve come from, you’ve entered an alert level 3 area,” he said. “You’re not welcome in Waikato, go home. Leave us alone.

“It’s just absolute arrogance at its best… there’s no need for you to be here.”

In the update shortly after 10am, the spokesperson said the police are continuing to monitor the ‘hīkoi’ after some of the protesters refused officers’ requests to leave.

The spokesperson confirmed that the majority of the protesters who arrived at the northern border in Te Hana earlier this morning have since left the area without issue. More than 50 congregated on the northern side of the boundary, while around a dozen others gathered on the southern end.

“Police engaged with this group, supported by our Iwi Liaison officers and our partners from Ngāti Whātua at the checkpoint. The majority of this group have subsequently left the checkpoint area without issue.”

Police say they are “incredibly disappointed” that the protest went ahead despite warnings ahead of the march on Tuesday.

“By carrying out non-essential travel they are putting themselves, our staff and the wider community at risk, while additional police resources have had to be redeployed in order to monitor the movements of this group at the checkpoints,” the spokesperson said.

Motorists attempting to cross the Mercer checkpoint into Auckland are now reporting long queues due to the ongoing stand-off between the police and protesters at the southern border.

A motorist told the New Zealand Herald that traffic had come to a crawl almost 10km from the checkpoint, situated near the Springhill Rd turnoff in Meremere. From there, it was taking about an hour to reach the checkpoint, they said.

The police spokesperson said that motorists attempting to enter Auckland via the southern boundary should expect some delays.

“The group of protestors remain parked up to the side of the road near the southern checkpoints and police continue to monitor the situation for the safety of everyone involved.

“Traffic is still able to travel through the southern checkpoints, however some delays have been reported so motorists are advised to expect some delays.”

Video footage shows members of the Hīkoi of Truth movement standing at the border, saying they are protesting for those who fear to submit to medical procedures they believe are harmful.

Several small tents have been erected on a grass verge near the Orams Rd checkpoint after the protesters camped there overnight.

“We don’t move unless it’s forward,” the group can be heard saying.

In a live video, one of the protesters can be heard saying they will not disrespect the police, but the group will continue to camp out at the checkpoint if the group is prevented from travelling north.

Amazing how respected leaders of the Left have become Establishment figures, essentially putting their voices behind Genocide

Police stopped fifty vehicles at Auckland’s southern border last night as they they attempted to cross into the city unlawfully.

The protestors are calling themselves a hikoi – and are wanting to travel from Rotorua to Waitangi.

The convoy blocked the road at the southern checkpoint before police moved them onto a side road where they still are. We’re now hearing there are also protesters at the Northern border trying to get into Northland.

Te Tai Tokerau Border Control Spokesperson Hone Harawira wants nothing to do with them.

He spoke to Corin Dann.