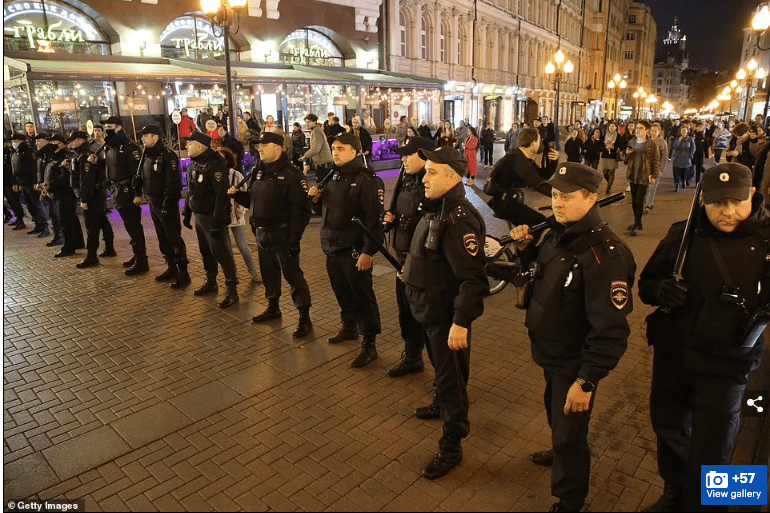 Western media is full of Russians panicking and Hal Turner is picking this up, presumably because he thinks the Russians are about to launch a nuclear bomb against NYC. Here is some context (not to mention, FACTS), from Margarita Simonyan of RT

“We talked with the Defense Ministry, and asked to clarify who exactly falls under the mobilization.

Citizens who fall under ALL THREE points are subject to mobilization:

1. Who served in the military.

3. And most importantly. THEY MUST HAVE COMBAT EXPERIENCE.

Let it be for now. I will keep you updated as I understand.”

Hint: Russia has an army greater than 1 million.

Here is the hysterical Daily Mail

‘I’m not going to die for Putin!’ Terrified Russians begin anti-mobilisation protests after one-way tickets fleeing the country sold out following Vladimir’s announcement that 300,000 reservists will be sent to Ukraine

Terrified Russians have taken to the streets in protest against being sent to the front lines in Ukraine after Putin ordered the mobilisation of reservists in a dramatic escalation of the war.

More than 100 demonstrators holding ‘no to mobilisation’ signs and chanting anti-war slogans have been dragged away by armed police trying to stamp out the unrest across the country, while others desperately try to flee the country by snapping up one-way tickets from Moscow.

The disobedience and the exodus are driven by fears that Russia’s borders could soon close or that a broader call-up might send many men of fighting age to the war after Putin ordered the call-up of 300,000 military reserves today – a first in Russia since the Second World War.

But he is balancing that by pointing out

On the other hand, there is a pro-Zelensky channel called Russian Media Monitor that selectively captures statements from Russian TV that are ignored by the Duran, Scott Ritter and other pro-Russian commentators.

A picture released by the Kremlin shows Vladimir Putin speaking during a televised address to the nation in Moscow when he announced a partial mobilisation for the country’s military campaign in Ukraine. Photo: AFP / Kremlin.Ru

Russian President Vladimir Putin has announced a partial military mobilisation, as Russian forces battle a Ukrainian counter-offensive that has regained some occupied territory.

In a televised address, Putin said the partial mobilisation of its 2 million-strong military reserves was to defend Russia and its territories, claiming the West wants to destroy Russia and did not want peace in Ukraine.

“To protect homeland, its sovereignty, … I consider it necessary to support the decision of the General Staff on partial mobilisation,” he said.

Putin restated his aim was to “liberate” east Ukraine’s Donbas industrial heartland region and that most people in the region did not want to return to what he called the “yoke” of Ukraine.

Putin said the West had engaged in nuclear blackmail, but Russia had “lots of weapons to reply” and that he was not bluffing.

In Moscow’s first update on casualty numbers in almost six months, Shoigu said 5397 Russian soldiers had been killed since the start of the conflict.

Shoigu dismissed assertions by Kyiv and the West that Russia has suffered heavy losses in its seven-month campaign, and said 90 percent of wounded Russian soldiers had returned to the frontline.

It was the first time Russia had given an official death toll since 25 March, when it said 1351 servicemen had died.

The US Pentagon said in August that it believed between 70,000 and 80,000 Russian personnel had been killed or wounded, and in July estimated Russia’s death toll at around 15,000.

Shoigu said Russia had 25 million potential fighters at its disposal.

The decree published on the Kremlin’s website said the call-up would apply only to reservists with previous military experience.

Shoigu said this meant around 300,000 men. He said they would be given additional training before being deployed to Ukraine, and that they would not include students or those who had only served as conscripts.

Shoigu said the mobilisation would help Russia “consolidate” territories it holds behind a 1000km frontline in Ukraine.

Russia already considers Luhansk and Donetsk, which together make up the Donbas region Moscow partially occupied in 2014, to be independent states. Ukraine and the West consider all parts of Ukraine held by Russian forces to be illegally occupied.

Russia now holds about 60 percent of Donetsk and had captured nearly all of Luhansk by July after slow advances during months of intense fighting.

Those gains are now under threat after Russian forces were driven from neighbouring Kharkiv province this month, losing control of their main supply lines for much of the Donetsk and Luhansk front lines.

In an apparently coordinated move, pro-Russian figures on Tuesday announced referendums for 23-27 September in Luhansk, Donetsk, Kherson and Zaporizhzhia provinces, representing around 15 percent of Ukrainian territory, or an area about the size of Hungary.

European leaders have reacted to Putin’s announcement. Czech Republic Prime Minister Petr Fiala said the partial mobilisation “is an attempt to further escalate the war Russia launched against Ukraine” and “further proof that Russia is the sole aggressor”.

Fiala said it was essential to continue providing aid to Ukraine and was in Czech interests to carry on doing so.

The Czech Republic has supplied the Ukrainian armed forces with heavy weapons including armoured vehicles, helicopters and artillery systems. It was the first country to send tanks to Ukraine.

The Vice Chancellor of Germany Robert Habeck described mobilisation as “another bad and wrong step from Russia”.

“He and his Defence Minister have sent tens of thousands of their own citizens to their deaths, ill equipped and badly led,” he wrote on Twitter.

“No amount of threats and propaganda can hide the fact that Ukraine is winning this war, the international community are united and Russia is becoming a global pariah.”

Meanwhile, the US ambassador in Ukraine said the announcement was a sign of weakness.

“Sham referenda and mobilisation are signs of weakness, of Russian failure,” Bridget Brink wrote on Twitter.

“The United States will never recognise Russia’s claim to purportedly annexed Ukrainian territory, and we will continue to stand with Ukraine for as long as it takes,” she added.