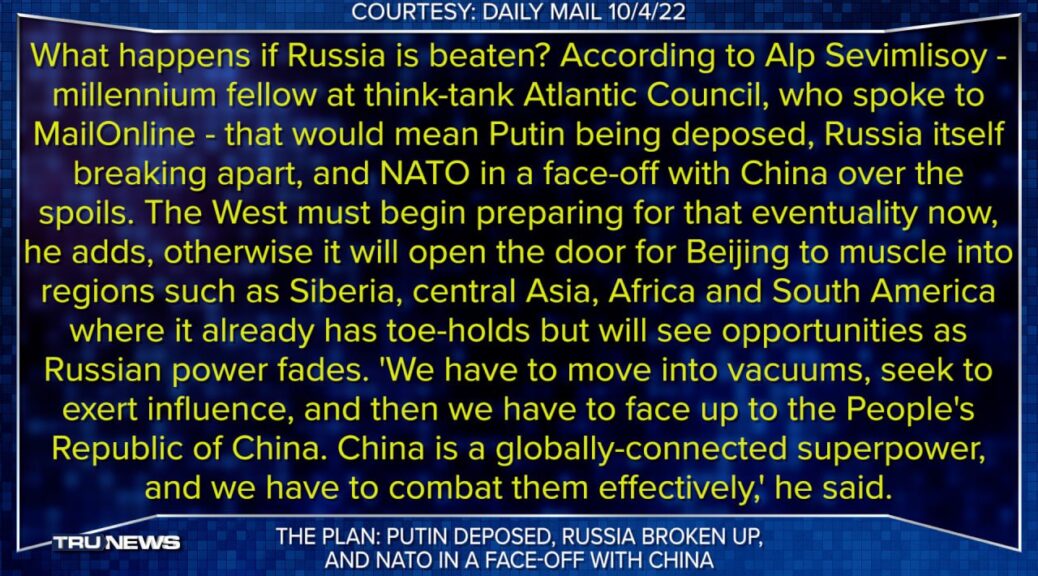 This Zionist just shared their plan.

Then fight China and then rape Russia.

Putin deposed, Russia broken up, and NATO in a face-off with China: As Ukraine sees a path toward victory and a desperate Vladimir hits the panic button, expert argues THIS is how the war could end

And Erdogan’s position could be key to ending the war, Mr Sevimlisoy believes, because it would be Turkey together with Ukraine that would be key to containing the Kremlin after defeat.

‘Russia will have to come to terms with the fact that it is no longer a world power, but a state – a Black Sea state whose system nobody seeks to imitate,’ he said. ‘And what we’re going to see and are seeing now is that the  domination of this region will be up to Turkey.’

Equipped with the latest-generation US fighter jets and hypersonic missiles, Mr Sevimlisoy believes that Turkey – alongside a Ukrainian military adept at fighting Russia – will be the key to Western influence in the region and further beyond into central Asia.

This is necessary, he says, because it will put NATO and the West in a strong position to compete with Beijing.

‘In any region where Russian influence wanes, we have to make sure we have to create regional partnerships, to have permanent presences,’ he said.

‘We have to move into vacuums, seek to exert influence, and then we have to face up to the People’s Republic of China. China is globally connected superpower, and we have to combat them effectively.

‘We have far more military experience within NATO than the Chinese do, and that is to our advantage, but we have to put boots on ground in these places, to ensure that when the time comes to stand up to them – and that time will come – we’re not playing catch-up.’

Land grabs, hundreds of thousand of conscripts thrown on to the front lines, and a nuke for anyone who dares stand in his way: Vladimir Putin has spent the past week doubling down on his war in Ukraine.

But his bluster belies a simple fact: Russia is losing the war, and he knows it.

The despot is desperate. His army is in tatters, his battleplans shot, he’s burning through his cash reserves at an unsustainable rate, and winter is looming. Meanwhile Ukraine’s army continues to advance across the country, giving Kyiv a viable path to victory. Which begs the question: What happens if Russia is beaten?

According to Alp Sevimlisoy – millennium fellow at think-tank Atlantic Council, who spoke to MailOnline – that would mean Putin being deposed, Russia itself breaking apart, and NATO in a face-off with China over the spoils.

The West must begin preparing for that eventuality now, he adds, otherwise it will open the door for Beijing to muscle into regions such as Siberia, central Asia, Africa and South America where it already has toe-holds but will see opportunities as Russian power fades.

‘We have to move into vacuums, seek to exert influence, and then we have to face up to the People’s Republic of China. China is a globally-connected superpower, and we have to combat them effectively,’ he said.

Putin has tried to stem the rot by annexing regions, conscripting hundreds of thousands of soldiers and threatening nuclear war – but an expert has told MailOnline he faces being deposed with NATO ended up in a face-off with China

Back in February, when Putin first launched his ‘special military operation’, such as scenario was barely thinkable.

The West may have been rooting hard for Ukraine, but few thought victory was possible – they were outnumbered, outgunned, and hemmed in from three sides by the full force of the Russian military, then estimated to be second only to the US. It may take days, or weeks, perhaps months, but few doubted Kyiv would eventually fall.

But then followed a series of spectacular miscalculations by Putin and his generals. Poor preparation and planning, corruption that had rotted Russia’s military stockpiles from the inside out, and poor morale among the troops combined to hand Ukraine the initiative – which its commanders exploited ruthlessly.

Alp Sevimlisoy, a fellow with the Atlantic Council think tank, believes Putin would not survive defeat – and that Russia itself may begin to crumble

The lightning advance on Kyiv that Putin had banked on to topple the regime and hand him control of the country within a matter of days slowed, then stopped, and finally culminated in a ‘goodwill gesture’ – aka a full-scale retreat – as the Kremlin instead set its sights on ‘liberating’ the Donbas.

Ukraine then delivered a devastating one-two punch: An assault on Kherson in the south which sucked in Russian troops, before a hook east out of Kharkiv broke Russian lines, precipitated a full-scale rout, and handed thousands of square miles back to Kyiv’s control in a matter of days.

Russia has been left reeling. Its military may not be flat on the canvas yet, but a heavy blow has been landed and its knees have begun to buckle. A few more, and a knockout is on the cards.

Speaking just after Ukraine launched its Kharkiv counter-attack, Mr Sevimlisoy told MailOnline: ‘The Ukrainians have the momentum – they are winning. But this conflict won’t just end with both sides going away and saying ‘that’s that’, it will reverberate throughout Russia and the region.’

That would mean Russian power fading not just from the likes of South America and Africa – where it has previously sent mercenaries, handed out loans and built infrastructure – but also from ex-Soviet satellite states such as Kazakhstan, Georgia, and Armenia, he believes.

And Russia itself could succumb to in-fighting, with rebellious regions seeking to break away from Moscow’s control as power-brokers within the Kremlin turn on one-another and vie for Putin’s throne.

Though the prospect of a Putin-free Russia may once have seemed the stuff of fantasy, Mr Sevimlisoy believes there is almost no way for him to survive defeat in Ukraine.

He’s not alone in thinking so. In the weeks since Ukraine’s counter-attack, experts have openly questioned whether Putin is facing the end – Professor Grigory Yudin predicted so to Canada’s CBC, ex-British army officer Richard Kemp mulled the idea in The Telegraph, and it was also debated by Foreign Affairs magazine.

Mr Sevimlisoy believes Putin’s ouster would fire the starting pistol on all manner of in-fighting within Russia: Different branches of the military turning on one-another, regions bidding to break away from the country, and ex-Soviet satellite states looking for allies many miles away from Moscow.

‘Russia’s failure in Ukraine is failure of statecraft,’ he said. ‘There will be groups saying “this isn’t how we should be governed”. The military will say the campaign has been a failure.

‘I think collapse will come from infighting in the intelligence services and military, and forces within Russia will see to use this as opportunity to say: “We can govern ourselves better and we have enough international support to push for independence.” We should definitely support that.’

But there is no guarantee that whoever replaces Putin will be any less extreme. Many believe the heir-apparent to be Sergey Naryshkin, head of the foreign intelligence service, who is considerably more-hawkish than Putin when it comes to the West.

That means NATO’s mission will be to ‘contain Russia and the Russian armed forces’, Mr Sevimlisoy argues, but also ‘we’d be working to contain China.’

Russian power would wane over ex-Soviet satellite states such as Azerbaijan, Kazakhstan and Kyrgyzstan – and even further abroad, in Africa and South America where Putin has been propping up dictatorial regimes with mercenaries, cheap loans and trade deals.

NATO must be ready to compete in all those arenas, or else risk losing them to Beijing’s sway.

There are already signs that the rot is setting in. Kazakhstan, long an ally of Moscow, has been taking an increasingly defiant tone against Moscow – welcoming in more than 100,000 Russian men who had fled Putin’s draft while also insisting that territorial integrity must be respected, though without directly mentioning Ukraine.

Azerbaijan and Armenia – another ally of Moscow – resumed fighting a few weeks ago as Moscow tried to shore up its western flank against the Ukrainians, with Armenia forced to acknowledge that Putin was not going to help defend its territory, despite the two being in a security pact.

And other nations that until now have given tacit support to Russia are beginning to voice concerns. Chinese Foreign Minister Wang Yi, speaking at the UN a few days ago, urged Moscow not to let the Ukraine war ‘spill over’ and to ‘protect the legitimate rights and interests of developing countries.’

India’s Prime Minister Narendra Modi, having initially tried to tread a careful middle ground on Ukraine, delivered an even bolder rebuke – telling the Kremlin: ‘Today’s era is not an era of war, and I have spoken to you about this.’

Turkey’s President Recep Tayyip Erdogan also spoke out to say that he had talked with Putin at a recent summit in Uzbekistan, and believes ‘he wants to end this as soon as possible’ because ‘the way things are going right now are quite problematic’.

One thought on “The imperialist vision:Take down Russia; fight China and then rape Russia”