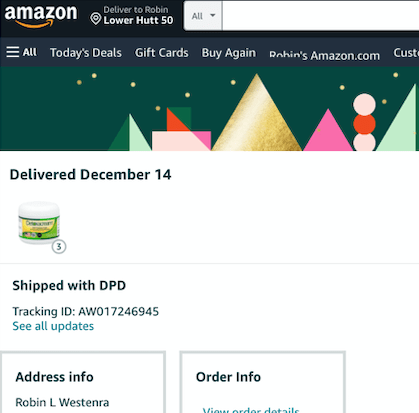 A few weeks ago I watched a video presentation by Dr. Ana Mihalcea and on the basis of that I decided to experiment with EDTA chelation.

The obvious answer for an effective but gentler form of detoxification was to use a EDTA detoxacream.

I could have ordered from the firm recommended by Dr. Ana but I was mindful of the difficulty ordering stuff from the United States during the covid era so I decided to opt for a similar product being marketed by Amazon.

The thinking was that the shipping would be more efficient than with a small firm.

Knowing this would take up to 3 weeks to reach me I ordered some oral EDTA capsules from within New Zeaiand and I have now been on that for 3 weeks.

I ordered 3 pottles of EDTA cream and got notification that the product was on the way and my credit card was duly debited.

Within  a couple of days I received a notification that a second parcel was on its way, along with a book.

The thing was that I had not ordered either of these.

Bring very averse to contacting the Amazon behemoth I did nothing about this.

This was followed up by a series of emails whereby  my (non)-orders were canceled although I had received notification that these were on the way.

Subsequently, I was reimbursed without any explanation.

I received numerous emails, each one superseding and replacing the previous one, saying the parcel would be delivered on 19 December although the tracking notice indicated that the goods had entered New Zealand on the 13th December. 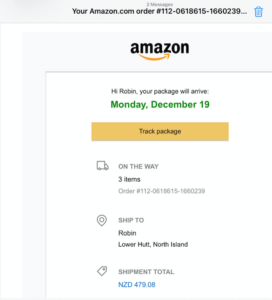 Yesterday I had another email saying the goods were running late and should be delivered by the 23rd with the same tracking notice.

By evening this email was replaced by one that said the goods had been delivered on the 14th December.

Then this morning I had notification that the book which I hadn’t ordered and been refunded for had also been delivered! 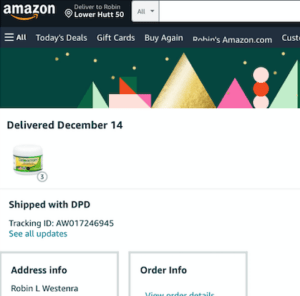 At that point I realised that I would have to contact Amazon, so I found a chat where I was told the goods had been delivered (which clearly they weren’t!).

When this failed to satisfy I got someone to ring me and got someone I suspect was ringing from the Philippines.

I was unable to get through more than the most basic points – if I had been able to see the interaction I am sure I would have seen a blind wall of miscomprehension when I tried to explain myself.

The only things that came back were statements that “the goods have been delivered” or “would you like a refund”.

I may as well have been talking to sophisticated AI.

Pam and I talked about it and Pam thought it was like something she had learned in systems thinking – there may be a miscommunication  between Orders and Dispatch at a time when the company was almost out of stock.

I think it is worse than that.

Everything is artificial intelligence and I would not be surprised to learn that it is all AI, right from taking the goods from the shelves, without any human input.

It also seems to me that, with increasing reliance on AI, and possibly the training of employees, the human interface is becoming more robotic and automated and staff are unable to come up with truly human responses such as undertaking to check with the courier in New Zealand.

The sole solution is a refund and there is never any reasonable explanation for a situation that makes zero sense.

So, I am about to become $500 better off, but it looks as if my experiment with EDTA has been scuppered.

Meanwhile Amazon are out of stock and say they do not know when or IF they are getting in more stock. I have more than an impression that FDA might be moving against EDTA now they have wind that people may be starting to use it to treat vaccine injuries.

Such is the world we live in.

I think I am going to watch films of Kafka’s the Trial and the Castle over the holidays.