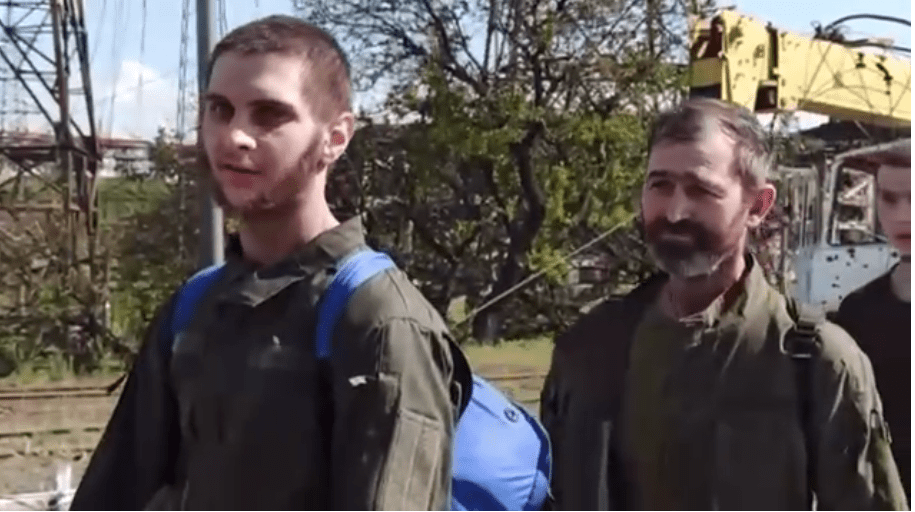 The last members of Ukraine’s neo-Nazi Azov unit have surrendered in Mariupol
File Photo: Azov unit fighters, who have surrendered at the Azovstal steel plant, walk on a road in the Russia-controlled port city of Mariupol, Donetsk People’s Republic. © Sputnik/Russian Defence Ministry

The entire territory of the Azovstal factory complex in Mariupol has been liberated, the Russian Defense Ministry announced on Friday. More than 2,400 people surrounded inside for almost a month, including Ukrainian servicemen and members of the neo-Nazi Azov unit, have laid down their arms and surrendered.

“The last group of 531 militants surrendered today,” the Russian military spokesman, Major-General Igor Konashenkov, said in a statement. He added that a total of “2,439 Azov Nazis” and Ukrainian servicemen had laid down their arms since May 16, and that the entire Azovstal complex is now under control of Russian armed forces.

Azov and remnants of Ukrainian regular troops retreated into the sprawling steel factory on the coast of Mariupol, where they were completely surrounded on April 21. Russian President Vladimir Putin ordered the military not to storm the complex but to blockade it “so a fly can’t get inside” and compel the militants to surrender.

Russian Defense Minister Sergey Shoigu informed Putin on Friday of the successful completion of the operation, Konashenkov said. He also said that Azov commander had to be transported in an armored car for his safety.

The so-called “commander” of the Azov Nazis was taken away from the factory in a special armored car, due to the hatred of Mariupol residents and their desire for revenge against him for numerous atrocities.

In a video released on social media earlier in the day, Azov commander Svyatoslav “Kalyna” Palamar denied he had left the factory and said he was conducting a “certain operation” whose details he could not disclose. Palamar thanked “the world” and Ukraine for support, and signed off with “see you.”

After the first batch of militants surrendered on Monday, the government in Kiev announced the “end of combat operations” in Mariupol and said it had ordered the Azovstal troops to save their lives. President Volodymyr Zelensky personally said on May 18 that the “evacuation mission” from Azovstal was being “supervised by our military and intelligence officers” with the involvement of “the most influential international mediators.”

Both Ukraine and most Western media outlets avoided the word “surrender,” even when the Russian military published videos clearly showing the militants laying down their weapons.

Here are some other news, via Telegram

The so-called “commander” of the Azov Nazis, due to the hatred of Mariupol residents and the desire of the townspeople to massacre him for his numerous atrocities, was removed from the territory of the plant in a special armoured vehicle

Alexander Khodakovsky: When the “Azovtsy” began to give up, we were stunned. It turned out — there are more of them than us!
Results of the battle for Mariupol. And what will happen next The Komsomolskaya Pravda military correspondent spent a hundred days in the DPR Vostok battalion, from the very beginning of the Battle of Mariupol and together with its commander — Alexander Khodakovsky tried to sum up the results of the first stage of the special operation.

THEY COULD GO TO OUR REAR LIKE KOVPAK’S BRIGADE. I DIDN’T HAVE THE AUDACITY

At the end of February, immediately after the start of the special operation, the Vostok battalion moved from Donetsk to Mariupol in one throw, in one column. After several days of fighting, the battalion crossed the former border of the DPR and Ukraine and occupied the suburban villages of Kalinovka, Talakovka and part of Sartana, already considered the outskirts of Mariupol. Grueling battles began in the high-rise buildings of the Vostochny microdistrict-it adjoined Azovstal. High-rise buildings were taken, the enemy rolled back to the factory.

In mid-May, when the mass surrender of the “Azovstal prisoners” began, movements began at the Vostok field base – there were fewer cars, equipment, and fighters. The battalion prepared for new tasks. I metAlexander Khodakovsky and the first thing I asked:

– Everyone, the first stage of the war is over? What have we learned in these months?

– They realized that we can beat them, we can perform all the combat tasks that we set for ourselves. We had a psychological breakdown.

– What do our front lines look like now, in the republics?

– In the LPR, the guys have moved even further beyond their administrative borders, in the DPR, everything is in a state of development. At the same time, our line of contact goes further: Berdyansk, Melitopol, Kherson. Mariupol was such a problem spot inside our territories. The enemy’s accumulated resources in Mariupol could not but cause us concern.

“Could the enemy have counterattacked from here?”

– Yes, and there were such attempts, 28 armored vehicles.

And our line of encirclement of the city at the beginning was just dotted, we could expect everything. Look at this. Only in the area of our battalion, more than a thousand militants came out from Azovstal, they came out on their own feet, that is, they were fully combat-ready. And all blocking “Azovstal” now, hardly more than two thousand will be typed… At the end of February, immediately after the start of the special operation, the Vostok battalion moved from Donetsk to Mariupol in one throw, in one column.

– When I was on the front line (on the front line. – Ed.) and reported that the release of prisoners will now begin, our guys in the positions were in real concern! We were waiting for a breakthrough!

– Yes, but the “Azov” could not dispose of the superiority in resources, manpower. They did not have enough literacy and audacity. They could have marched in our rear like Kovpak’s brigade! But in the end, we solved a problem that has not yet been solved in modern military history. At Azovstal, they could defend themselves for many more months. We interviewed the workers and knew what kind of system of bomb shelters, passages and communications that even equipment can be moved through. But we forced them to surrender and got a unique experience of war in such conditions.

“Which one?”– We can defeat the superior forces of the enemy and do it with minimal losses. We’ve learned.