shrouded in smoke from

The
smoke from the fires has made it over 2000 km to NZ. It is even worse
further side. The photo doesn’t catch the colour which was vibrant,
but captures the haziness round the edges.

Apocalyptic
stuff but nothing compared to Australia!

New Zealanders in the South Island of the country have woken up to a red sun and orange skies on new year’s day, with the smoke from Australia’s catastrophic bushfires drifting east overnight.

Met Service forecaster Cameron Coutts said the intensity of the Australian bushfires in the past few days had fuelled the New Zealand haze, and this was the fourth time this summer New Zealand had been affected by fires across the Tasman.

“The last couple of days the fires in Australia have picked up in their intensity and produced a significant amount of smoke,” Coutts said. “Most of it is at high levels once it reaches New Zealand. There is the odd report of people being able to smell smoke, but it is not really affecting us at ground level at the moment, even though it is quite thick.”

Coutts said the smoke could increase the chance of rain and thunderstorms in the South Island, of which significant levels of both were forecast later on Wednesday.

Australia’s
deadly bushfires can be seen from space, with satellite images taken
760kms away capturing the extent of the disaster.

The
devastating infernos have claimed the lives of at least seven people
on the New South Wales south coast and another in Victoria over
Tuesday and Wednesday, with that number expected to grow.

At
least 176 homes had been destroyed on the NSW south coast, with
50,000 families left without power and the main streets of towns such
as Cobargo and Mogo virtually razed.

The
confronting satellite images were captured from the SENTINEL-2
satellites which orbit the earth at an altitude of 786 km.

One
image of the Clyde Mountain fire, 200km south of Sydney, showed the
extent of the damage spanning hundreds of kilometres, giving a
perspective to the massive challenge faced by mainly volunteer
firefighters.

Though
conditions moderated on Wednesday, giving the firefighters a chance
to contain and douse some fires, hot and windy conditions were
forecast to return on Saturday.

Another
image showed the devastation of the fires at the coastal town of
Batemans Bay early Wednesday morning as the blaze continues to
spread.

NSW
Police confirmed a total of seven people have been killed and two are
unaccounted for in the South Coast bushfires since Monday.

The
deaths include dairy farmer Patrick Salway, 29, and his father
Robert, 63, who died trying to save their property in Cobargo, near
Bega.

Young
father and volunteer firefighter Samuel McPaul, 28, was also among
those confirmed dead after he was killed by a fire tornado.

A
70-year-old man was found dead outside a home at Yatte Yattah, west
of Lake Conjola, on Tuesday night, while another man’s body was found
in a burnt vehicle on a road off the Princes Highway at Yatte Yattah
Wednesday morning.

The
body of a man was found in a vehicle on Wandra Road at Sussex Inlet
about 11.30am Wednesday but is yet to be formally identified, while a
seventh body was found outside a home Coolagolite, about 10km east of
Cobargo, 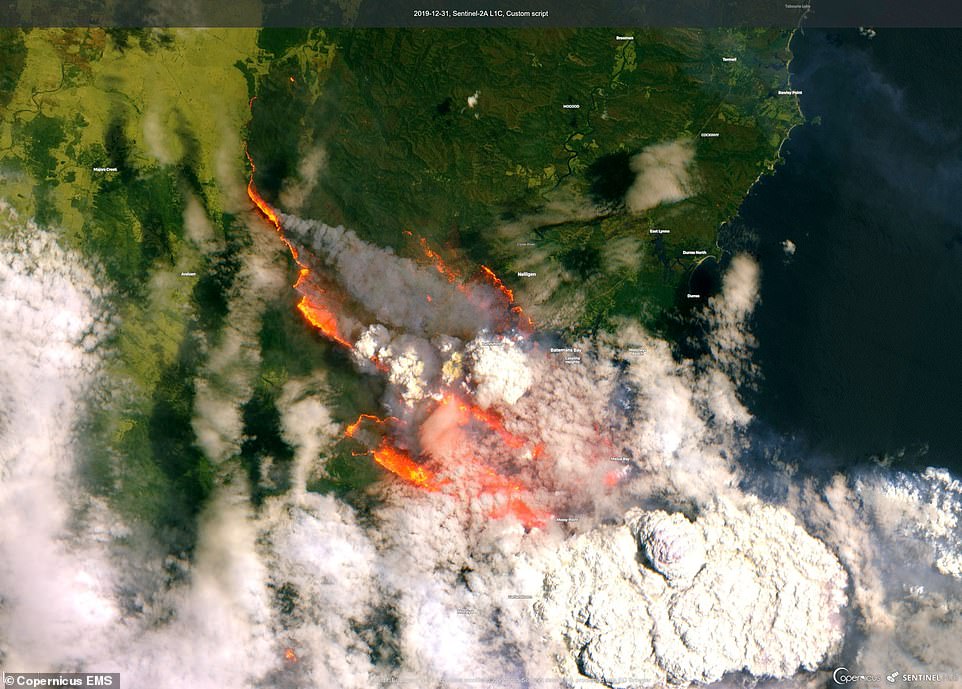 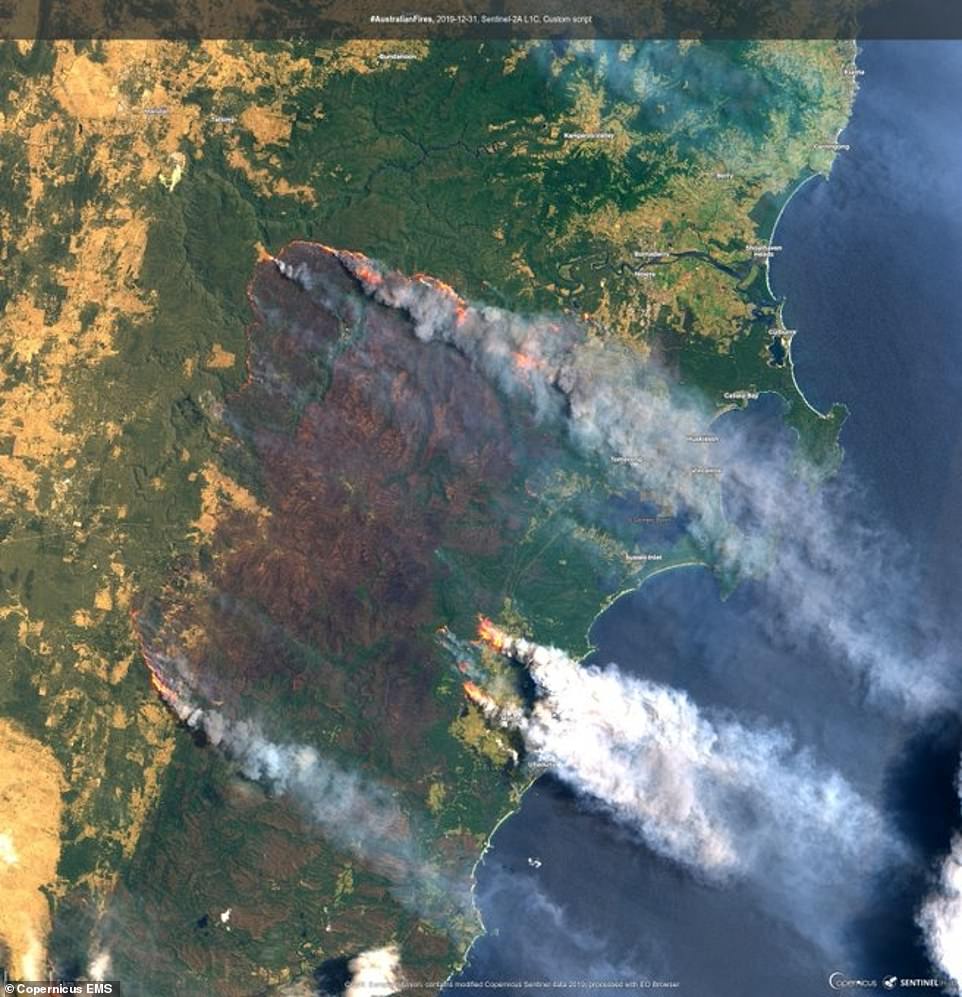 A confronting satellite image of the Clyde Mountain Fire, 200km south of Sydney, shows the extent of the damage spans hundreds of kilometres

Today
we have the three deaths. The police have confirmed at Yatte Yattah,
a body found in a vehicle there, which is near Lake Conjola,’ NSW
Police Force Deputy Commissioner Gary Worboys told media on Wednesday
afternoon.

‘One
at Sussex Inlet, a body in a vehicle. And ambulance officers have
told us about a body that they have located as well deceased.’ 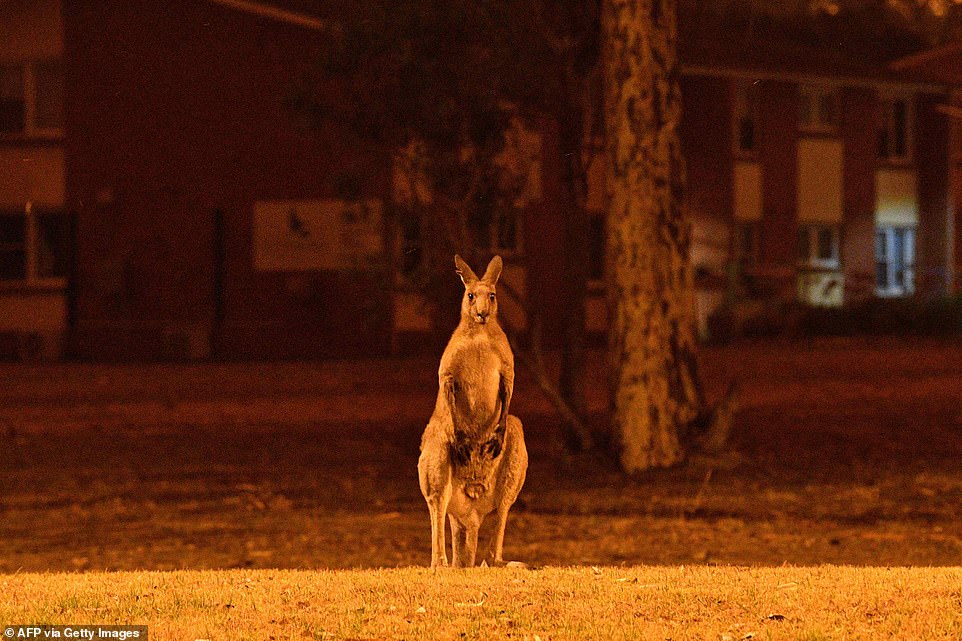 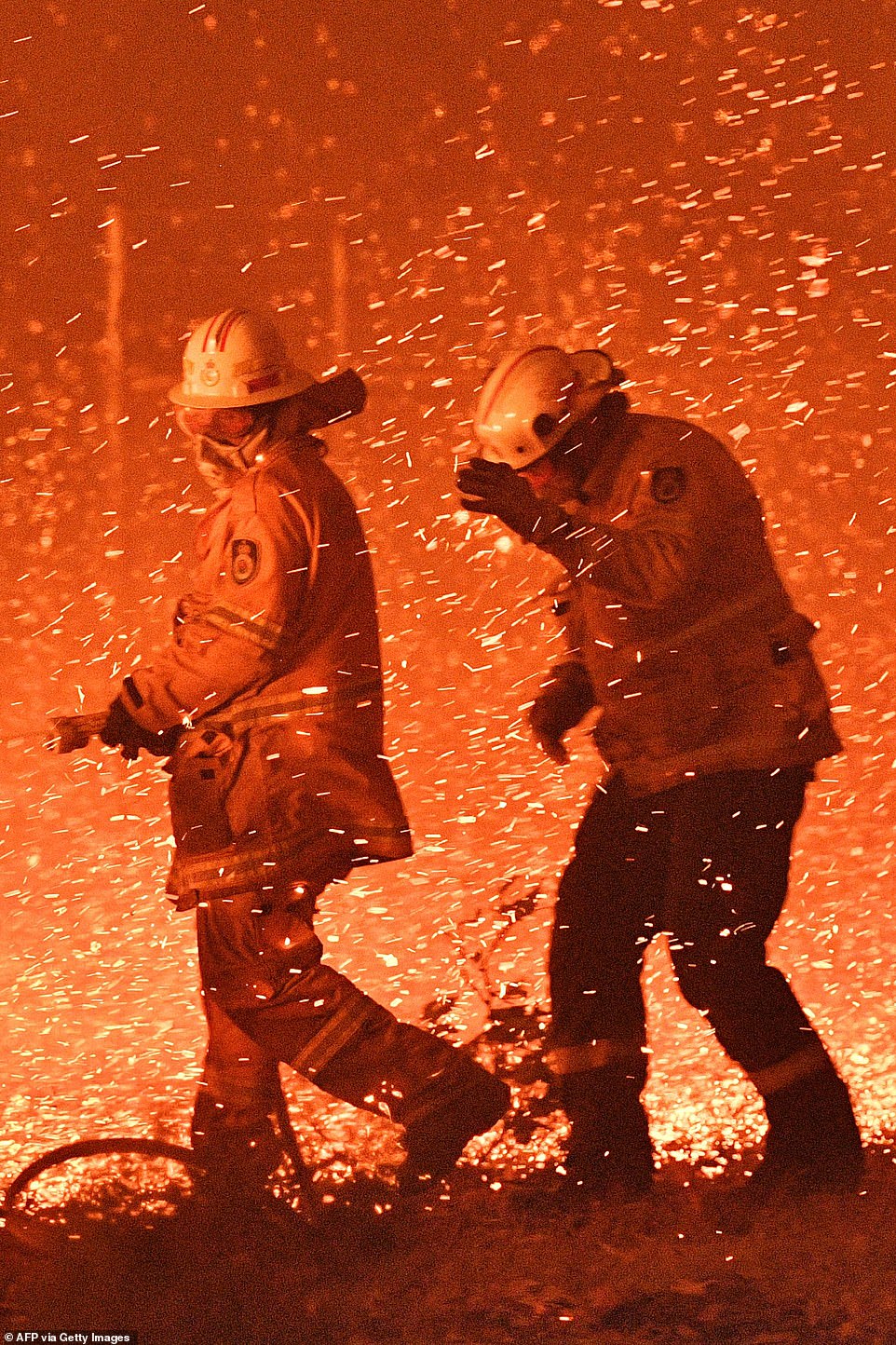 ‘In
terms of the situation down on the South Coast, we have three
emergency operation centres operating locally up and down the coast
that are dealing with any amount of local issues and doing their best
to solve those problems for people down there.

‘There
is no magic wand to wave across this and fix it in a short amount of
time.’

‘It’s
very difficult to console people when they’ve lost everything. We
need to make sure they’re supported,’ Ms Berejiklian said.

‘It’s
very difficult for those that have lost everything and people are
going through various stages of grief and loss. And all we can do is
support them in every which way we’ll do.’

Some
communities have seen up to 80 per cent of their homes and businesses
destroyed.

Of
the 176 homes confirmed lost, Conjola Park has lost 89, Malua Bay saw
40 destroyed and 15 have been confirmed lost in Rosedale, but the
amount of homes lost is expected to rise. 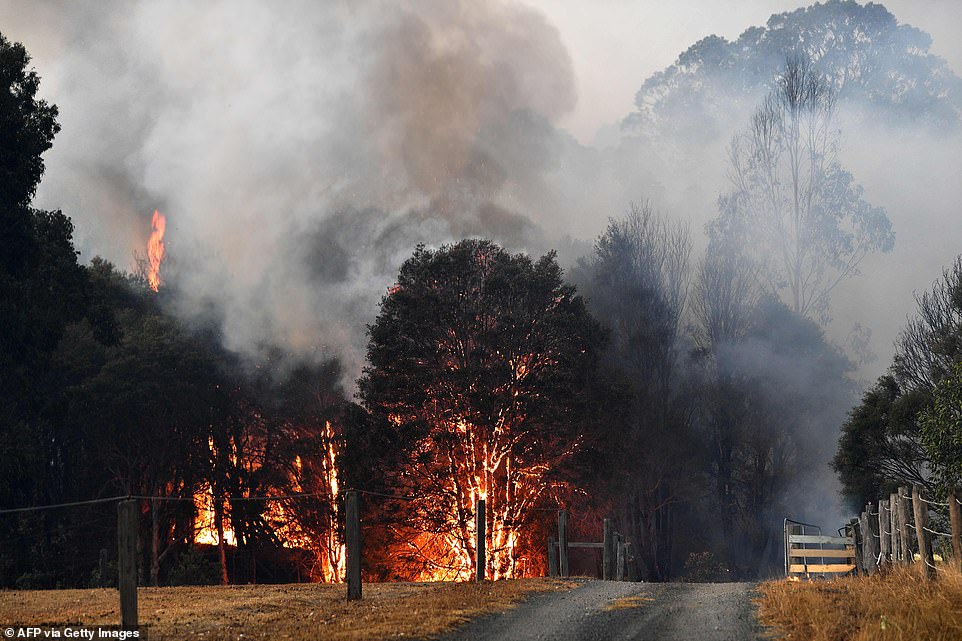 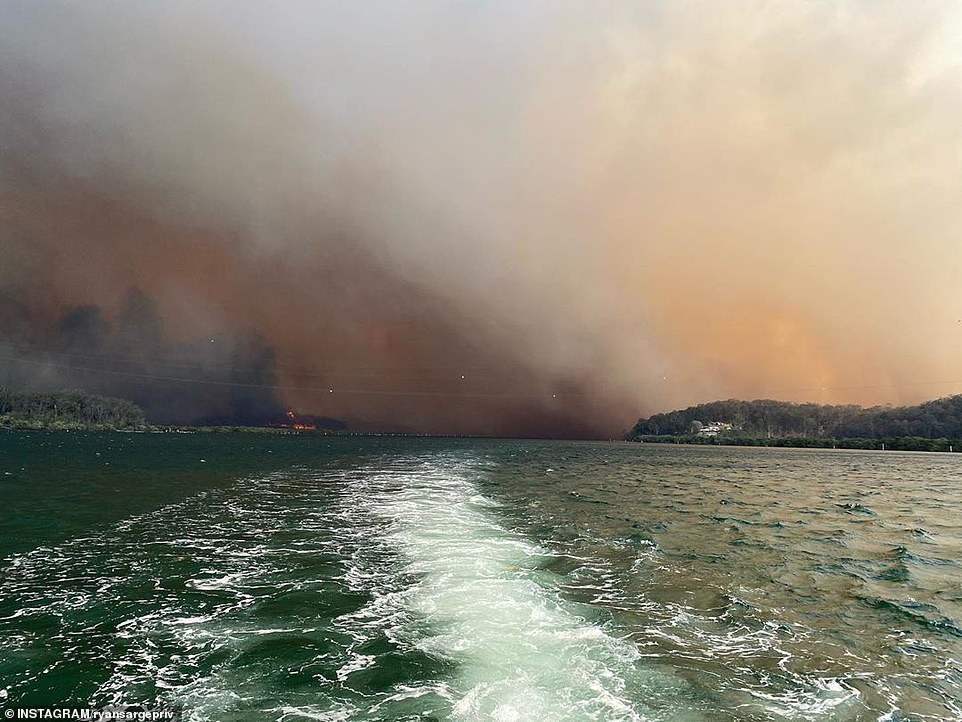 Commissioner
Fitzsimmons said the death toll is expected to climb as the RFS
analyse the extent of the damage on the South Coast.

‘So
we know that the damage that’s been occasioned right throughout the
south-east corner of New South Wales is a heavy toll. And more
importantly we’re seeing unfortunately the tragedy of lives lost as
well,’ he said on Wednesday afternoon.

‘As
the Premier quite rightly indicated, we need to prepare ourselves for
that number to climb with information coming out this afternoon.’

Andrew Constance, the Minister for Transport and Roads and Liberal member for Bega, was also in Batemans Bay and described Tuesday as being a ‘bugger of a day’.

‘Yesterday morning the fire moved at a pace that no-one expected. It shot around the back of places and hit Mogo pretty hard and burnt through to the beach,’ Mr Constance said.

‘It’s devastating. But we’ll pull together. A great community.’

Damage has also been wrought in the Snowy Mountains and towards Tumbarumba, as well as on the NSW Central Coast.

Some of the worst-affected communities along the coast battled bushfires into Tuesday night with no power and limited telecommunications.

At least 50,000 homes are currently without power on the South Coast.

‘The damage to the electricity network from these latest fires is significant and widespread, with at least 40 poles being destroyed in the past 24 hours,’ Endeavour South Coast regional manager Janine Cullen said.

Many spent New Year’s Eve without power as energy companies worked through the night to have it restored.

Ulladulla, south of Conjola Park, saw the power turn back on early Wednesday after fires tore through the area on Tuesday.

As of 4pm on Wednesday, 102 fires were burning statewide with 40 uncontrolled. Seven blazes were at watch-and-act level while no emergency warnings were current.

Dangerous bushfire conditions will return on Saturday, with 40C temperatures and gusty winds set to create worse conditions than this week’s blazes.

‘We are assuming that on Saturday weather conditions will be at least as bad as what they were yesterday,’ she said.

That
is something all of us have to brace ourselves for.’

Bureau
of Meteorology forecaster Agata Imielska explained to Daily Mail
Australia how conditions will be similar to Tuesday – with extremely
hot temperatures followed by powerful gusts.

‘Yesterday
temperatures peaked before a southerly came through,’ she said.
‘Saturday will be the next big day to look out for.’

The
mercury will start to rise on Friday when ‘large areas’ of the state
will have temperatures of more than 40C and these hot conditions will
intensify on Saturday. 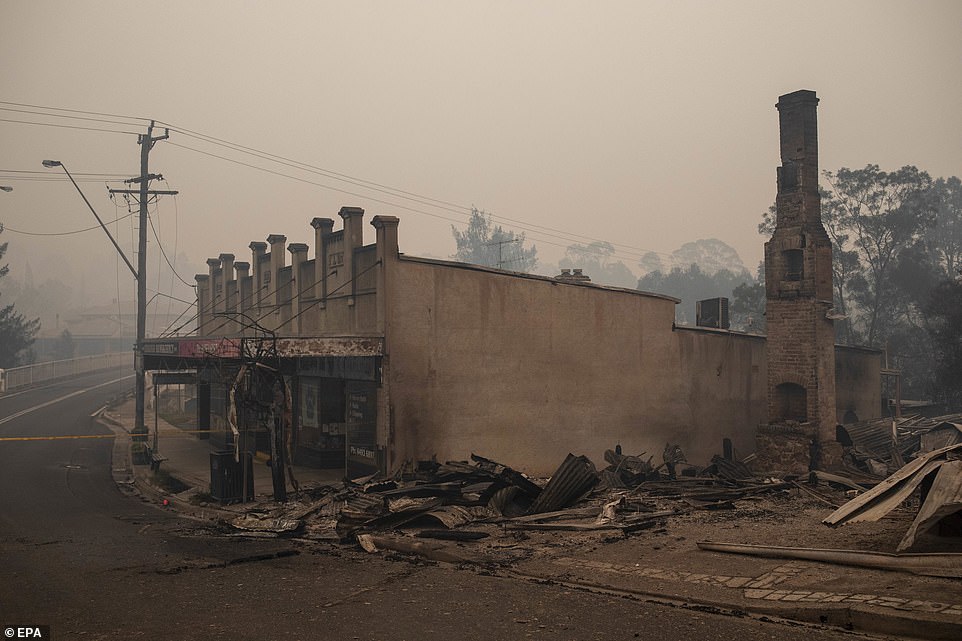 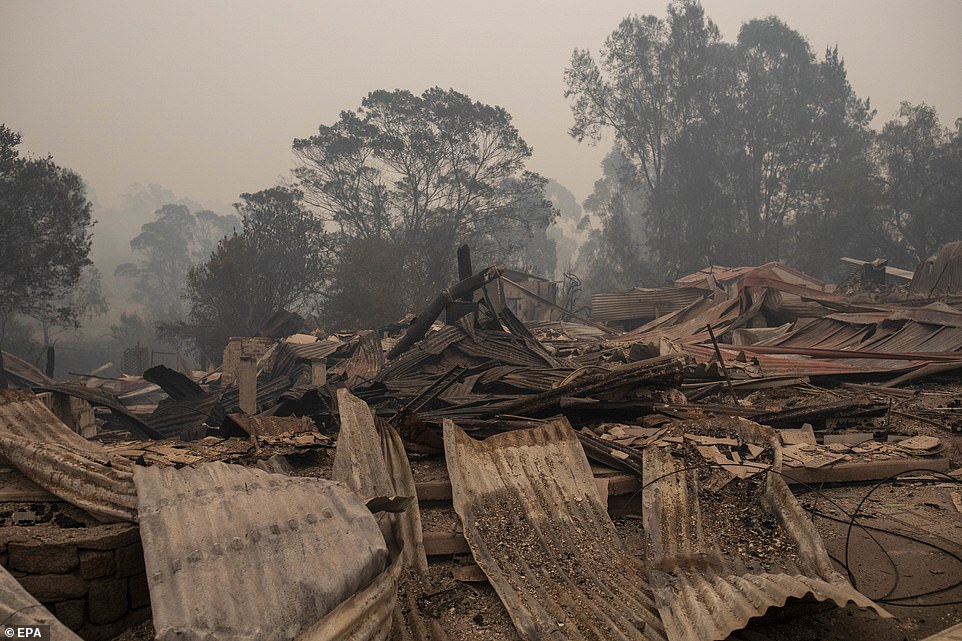 Three thousand firefighters were deployed to help battle the blazes and protect homes, businesses and vehicles 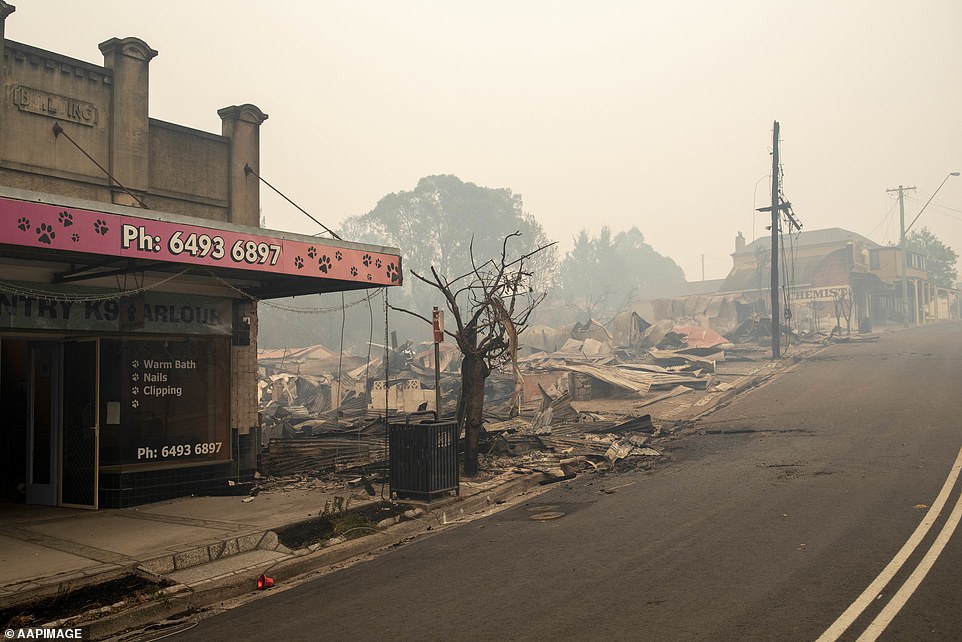 A
southerly was expected to come through during the late afternoon and
the strong winds expected will pose issues for firefighters.

‘The
dry and strong winds will make the blazes burning across the state
flare and drive them in a new direction,’ the forecaster said.

She
said the winds will also cause embers to fly further, sparking fresh
outbreaks.

Despite
the cooler conditions on Wednesday, parts of the state – including
the north west of the Great Dividing Range – remained ‘quite warm’.

Victoria
was set to experience similar conditions to New South Wales on
Saturday.

Temperatures
are set to rise before gusty winds will develop in the western part
of the state around dawn before hitting the east in the afternoon.

The
change is set to bring some isolated showers and thunderstorms.

The
eastern part of the state will be covered in a smoke haze from the
East Gippsland fires which menaced the town of Mallacoota on Tuesday.

Hope
was fading for four people who have not been heard from in 24 hours
in the Gippsland region.

There
were 46 fires still burning and 43 properties destroyed in the
popular holiday destination.

After
a day sheltering on the beach on Tuesday, tourists and locals in
Mallacoota spent the night sleeping in a local cinema.

Many
spent New Year’s Eve on the town’s jetty and were told to be ready to
get in the water at a moment’s notice to keep safe.

Those
in the NSW holiday towns of Bateman’s Bay and Bermagui also fled to
evacuation centres or the beaches on Tuesday.

Batemans
Bay had been ‘absolutely destroyed,’ according to local Federal MP
for Gilmore Fiona Phillips.

‘It’s
just been absolute devastation. The building loss we believe around
the Batemans Bay area and Mogo is in the hundreds. It’s very, very
significant,’ she said, according to the ABC.

‘The
industrial area at Batemans Bay has certainly suffered significant
damage and the Mogo CBD is unrecognisable.’

Ms
Phillips said hundreds of buildings have been destroyed in the
area.

Federal
MP for Eden Monaro Mike Kelly said at least 200 homes have been lost
on the Far South Coast.

The
situation was made more difficult by mobile phone outages throughout
the affected areas, meaning families and friends have been unable to
reach their loved ones.

No
communication is a rarity in today’s world so it’s an uncomfortable
feeling,’ Melbourne man Nic Baxter told AAP on Tuesday evening, as he
waited to hear from his father in Batemans Bay.

Military
aircraft and vessels came to the assistance of emergency services on
Wednesday in New South Wales and Victoria, evacuating people from
danger zones.

Army
Blackhawk and Chinook helicopters were deployed to rescue thousands
stranded on a beach in the fire-ravaged area.

The
United States and Canada were understood to have been asked to
provide ‘specialist aviation resources’ to help Australia’s emergency
efforts.

Major
roads, including several parts of the Princes Highway linking south
coast communities, were likely to remain closed for some time due to
hazards.