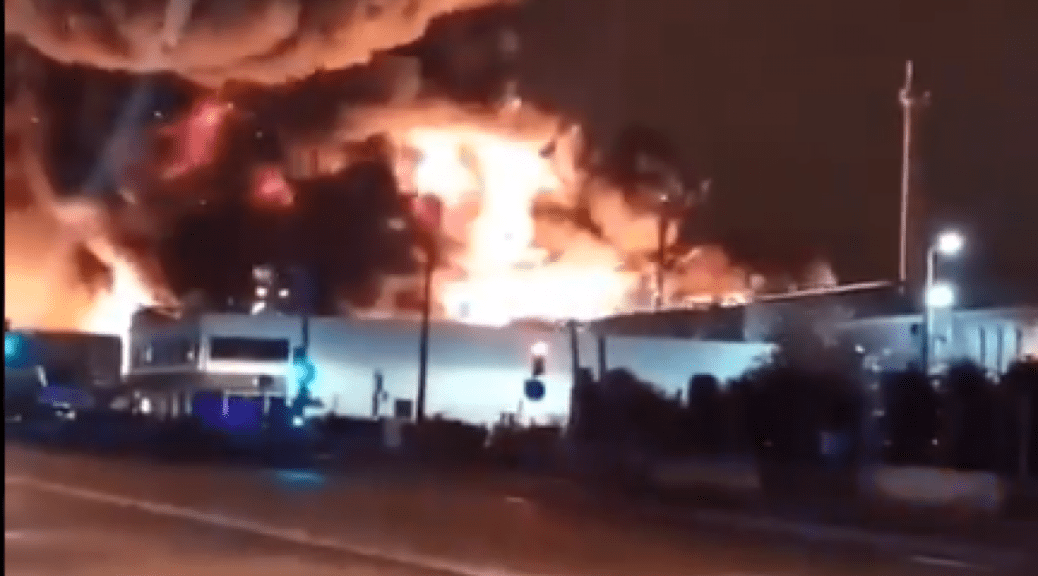 There is too much information coming out to do justice to this.

I recommend you go to my Telegraph account where I park all the information.

I have removed the videos from the following report. They can be found in the original item.

Wednesday 12 May: Fierce Fighting Continues Between Israel and Gaza Strip Factions. Death toll in Gaza hits 53, including 14 children and 3 women, in addition to 320 injuries

Since yesterday when heavy fighting erupted between Israel and factions controlling the Gaza Strip, hundreds of rockets and some missiles have been fired INTO Israel from Gaza and dozens of Israeli air strikes have hit Gaza in response.

As of 9:32 AM eastern US Time (New York City time) Explosions are being reported across multiple cities, Ashkelon, Ashdod, Ofakim, Beer Sheva and more, inside Israel.  The image above shows an ammo depot burning in Tel Aviv.

Hamas which governs the Gaza Strip tells the Egyptian mediators that if their conditions are not fulfilled, they will use a ‘previously un-seen weapon’ to target Israel.

For the first time the Egyptian intelligence delegation was _supposed to_ enter via Rafah crossing to push for a ceasefire and these events are typically coordinated with both Hamas and the Israeli forces.

The delegation was turned around and sent home after lack of coordination from the Israeli authorities and general understanding that both sides do not seek a ceasefire at this time.

The video below is a COMPILATION of the rocket fir from Gaza into Israel overnight.   It demonstrates the very serious attacks being launched from inside Gaza against Israel:

The two videos below show what it is like inside Gaza as the Israelis return fire with air strikes – terrifying!

These videos all demonstrate the very real danger to both sides from the fighting taking place. This isn’t some scuffle; it’s war.

Turkey President Recypt Erdogan calls for a peacekeeping force to be sent to the Israeli-Gaza border to protect Palestinian civilians.

And with the label “Too little, too late” The Biden administration is considering plans to dispatch a State Department official to Israel, amid the ongoing escalation with Gaza.

This morning, Hamas publicly stated “At 18:00, we will fire rockets towards new targets in Israel.”   It should be noted that Israel is seven hours ahead of US east coast time. If they make good on this statement, those “new targets” will be attacked about a half-hour from now at about 10:00 AM eastern US time.

If they can hit Haifa, and if they actually do it, it will mean that both Hamas and Hezbollah have long-range rocket ability.

Israel will be in peril, if both fronts lit up with long range rocket hits, and home front goes nuts with 3rd intifada / civil war.

Reports say Palestinians from Gaza have entered the Nahal Oz military base and are engaged in armed combat with Israeli soldiers.   The map below shows the location of the base relative to the Gaza Strip.

The cities of Eilat and Haifa in Israel have been ordered to open their bomb shelters.

Senior Hamas official : “In the next few hours the situation will deteriorate more and more.”

(HT Remark: This announcement by the Russia Foreign Ministry was a slap-to-the-back-of-the-head that Israel did NOT expect.  This is big.)

Israel prepares for further escalation of Gaza war: Defense Minister Gantz orders economy to shift to emergency footing to ensure continuity in crisis; schools in large parts of Israel including Tel Aviv area to remain closed until next week.

I just spoke via satellite phone with people in the Gaza Strip right now.

I asked what they hoped to achieve with these rocket attacks against Israel.  They responded “self-defense.”

I asked what they meant by that?  They responded:

“All this trouble began when Israeli courts started Evicting Arabs in the Sheikh Jarrah quarter; ruling that precedent from the 1950’s allows the eviction of non-Jews from certain neighborhoods to give those homes to jews.

When the seventh Arab/Muslim family got evicted, Arabs started meeting in Mosques to decide what to do about this ethnic cleansing by Israel.

When the Israelis found out that meetings were being held in Mosques, they sent police on Sunday to STORM the Al-Aqsa Mosque on the Temple Mount.   This is the third most important religious site to Islam in the entire world!  The police entered by force, using stun grenades and tear gas against people knelling in worship on their prayer rugs.

That was the last straw.  Israel was told to get their police out of the Al Aqsa Mosque.  They refused.   THAT started the rocket barrages.

Then on Tuesday, the Israeli police stormed the Al-Aqsa Mosque for the third time in as many days!  That’s when Tel Aviv came under our rocket attack.

Instead of stopping, Israel began sending fighter jets to knock down more apartment buildings, claiming they were where Hamas officials – who are the elected government in the Gaza Strip – were living.   These buildings weren’t launching rockets.  These buildings weren’t some terrorist headquarters or hiding spots; they’re homes where people live.  And they got knocked down by air strikes.”

I asked how the average Arab/Muslim views the situation overall and they responded:

The Israelis just did it again: Bombed another high rise building in Gaza: 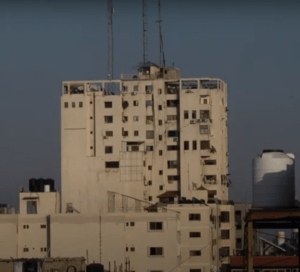 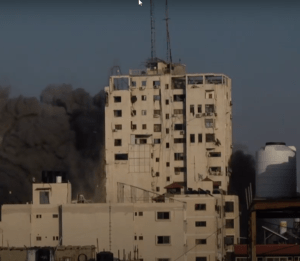 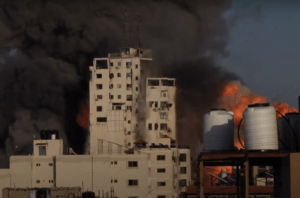 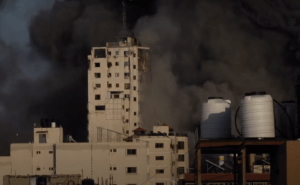 Israel sent another plane to finish knocking down the entire building!

As the new bombs hit: 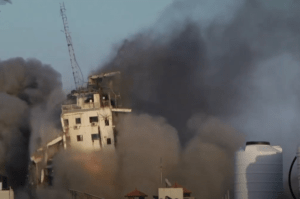 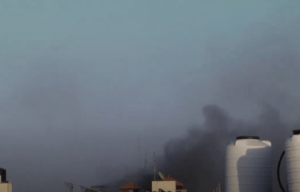 (HT Remark:  Haven’t the Israelis ever heard of a Search Warrant?)

New missile barrages coming out of Gaza, reaching very much farther, almost to the complete north west of Israel!

ALSO: Tonight marks the end of Ramadan in Gaza. Could see a significant uptick in rocket fire following sunset.

FLIGHTAWARE DATA SHOWS US AIRLINES HAVE CANCELLED FLIGHTS TO TEL AVIV, ISRAEL ON WEDNESDAY, AND THURSDAY AMID ATTACKS

Confirmed: United, Delta and AA have cancelled all flights into Israel.  El Al is still running for now.

Report from Lod, Israel: Jews broke into the Great Al-Omari Mosque during Arab prayers – and fired live ammunition at worshipers. Only miraculously disaster was prevented.

IDF has decided to expand strikes on targets in Gaza for the next week, with options to extend campaign even further into the future.

‘This is only the beginning’: Netanyahu vows to ‘inflict blows that Hamas has not dreamt of’

Israelis in Tel Aviv are attacking Palestinian-owned businesses in that city. Video below:

Netanyahu confirms that he refused a request for a ceasefire from unnamed parties.

Hamas-run Health Ministry in Gaza says 65 killed, including 16 minors, and 365 wounded from IDF strikes so far.

Palestinian bank branches in Gaza were destroyed for the first time in a coordinated effort by Israeli forces. (Must be those “terrorist” ATM rocket launchers?)  [HT REMARK: This whole thing is not about terrorism, it’s about ethnic hatred.  Only now, the hatred is so plain to see, no one can hide it anymore.   Who the hell blows up bank branches as a self-defense tactic?

The Israeli Cabinet has decided to increase the attacks on Gaza.

LYNCH MOB – Got it Wrong!

Hamas leader: – “So far we have only used our old and redundant missiles. In fact, we have not even used our modern and solid weapons yet.”

Things on the streets are already WAAAAAY out of control; this is getting REALLY bad:

(Translation) President Rivlin here News: “War breaks out in our streets, the silent majority is stunned and does not believe what he sees”

Two Israeli soldiers shot dead when attacked tonight by a Palestinian Naplusa in the West Bank. The attacker has been shot down and is dead.

Al Jazeera and KAN 11 showing riotous mobs in the streets. Not in Jerusalem but in other Israeli cities. No police in sight.

Intense shooting at the Hashmonaim neighborhood in the city of Lod, and reports of settler casualties now.

[PRIOR BULLETIN AT THIS SPOT – DELETED  AS NOT CREDIBLE]

MINUTES AGO IN GAZA