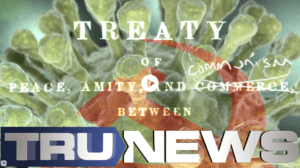 Today on TRUNEWS, we discuss the latest efforts by globalists to ensure the full vaccination of planet Earth, by instituting post-World War 2 style ‘COVID Accords.’ Vaccine passports are soon coming, with US states and the White House leading the charge. Is this the beginning of the Mark of the Beast?

Finally, we show evidence that the Western church has capitulated to the Coronavirus plan.

World leaders from countries in Europe, South America, Africa and Asia have called for a World War II-style treaty to “dispel the temptations of isolationism and nationalism” in order to shore up the response to future pandemics in an open letter published in several newspapers on Tuesday.

The proposed treaty would be grounded in the constitution of the WHO and seek to improve pandemic preparedness on an international scale, according to the letter with the matter of the next global health emergency a question of “not if, but when.”

The letter was written by 24 leaders, as well as the president of the European Council and WHO Director-General Dr Tedros Adhanom Ghebreyesus, and published in the U.K.’s Daily Telegraph, Spain’s El Pais and France’s Le Monde newspapers.

U.K. Prime Minister Boris Johnson, French President Emmanuel Macron and German Chancellor Angela Merkel are among the signatories to the letter calling for greater international cooperation in distributing vaccines and medical treatments, even as the EU and U.K. are embroiled in a current dispute over vaccine exports from the continent.

The world leaders describe the COVID-19 pandemic as the “biggest challenge to the global community since the 1940s.”

“At that time, following the devastation of two world wars, political leaders came together to forge the multilateral system,” they wrote. “The aims were clear – to bring countries together, to dispel the temptations of isolationism and nationalism and to address the challenges that could only be achieved together in the spirit of solidarity and co-operation, namely peace, prosperity, health and security.”

With vaccination rates varying widely across the globe, and richer countries having been accused of vaccine hoarding, the signatories said the pandemic “has been a stark and painful reminder that nobody is safe until everyone is safe.”

Earlier this year, the WHO’s Ghebreyesus said the world was on the “brink of a catastrophic moral failure” which would be “paid for with lives and livelihoods in the world’s poorest countries” because of global vaccine inequality.

The COVAX program, the global scheme to provide vaccines to lower-income countries as part of the Access to COVID-19 Tools (ACT) Accelerator, aims to distribute up to two billion doses of vaccines around the world by the end of this year, especially to countries that ordinarily would not be able to afford them on the market.

The U.S. has pledged $4 billion to the program, but the ONE Campaign, a global anti-poverty movement, has called for the Biden administration to send excess vaccine doses abroad to countries in need.

To date, richer countries in the West have advanced much further along their vaccination programs than their poorer counterparts in South America, Asia and Africa.

World leaders pushed Tuesday for a new international treaty to prepare for the next global pandemic — and avoid the unseemly scramble for vaccines hampering the Covid-19 response.

Leaders from 25 countries, the European Union and the World Health Organization (WHO) sought to get the ground rules down in writing to streamline and speed up the reaction to future global outbreaks.

The treaty would aim to ensure that information, virus pathogens, technology to tackle the pandemic and products such as vaccines are shared swiftly and equitably among nations.

“The time to act is now. The world cannot afford to wait until the pandemic is over to start planning for the next one,” WHO chief Tedros Adhanom Ghebreyesus told a virtual press conference.

Without an internationally-coordinated pandemic response plan, “we remain vulnerable”, he warned.

This is the same guy who sent covid patients into NY rest homes and who stands accused of sexual harassment.

If you are a psychopath and a criminal all you have to do is to face down all the criticism and you can get away with murder today.

Gov. Cuomo announced the launch of a new pass that’s “similar to a mobile airline boarding pass,” but for a COVID vaccine or test.

Gov. Andrew Cuomo announced the launch of Excelsior Pass – a free, voluntary platform developed in partnership with IBM, which utilizes proven, secure technology to confirm an individual’s recent negative PCR or antigen test result or proof of vaccination to help fast-track the reopening of businesses and event venues in accordance with New York State Department of Health guidelines.

According to Cuomo’s office, the Excelsior Pass is “similar to a mobile airline boarding pass.” Individuals will be able to either print out their pass or store it on their smartphones using the Excelsior Pass Wallet app. Each Pass will have a secure QR code, which participating businesses and venues can scan using a companion app to verify proof of COVID-19 negative test results or proof of vaccination. An individual’s data is kept secure and confidential at all times, officials say.

Many, including USA Today, are calling the Excelsior Pass a “vaccine passport.”

As part of this initial launch, participating New Yorkers may choose to use Excelsior Pass to verify their COVID-19 vaccination or negative test results as needed to gain entry to major stadiums and arenas, wedding receptions, or catered and other events above the social gathering limit.

Interested New Yorkers can opt in to use Excelsior Pass and learn more here; interested businesses can opt-in and learn more here. Major venues have already announced they will begin utilizing this technology in the coming weeks, including Madison Square Garden in New York City beginning next week and the Times Union Center in Albany.

“New Yorkers have proven they can follow public health guidance to beat back COVID, and the innovative Excelsior Pass is another tool in our new toolbox to fight the virus while allowing more sectors of the economy to reopen safely and keeping personal information secure,” Cuomo said. “The question of ‘public health or the economy’ has always been a false choice — the answer must be both. As more New Yorkers get vaccinated each day and as key public health metrics continue to regularly reach their lowest rates in months, the first-in-the-nation Excelsior Pass heralds the next step in our thoughtful, science-based reopening.”

New York State is the first state in the U.S. to formally launch this potentially transformational technology. Prior to its launch, two successful pilot demonstrations were held in recent weeks, along with a beta test where thousands of New Yorkers participated in a limited roll out of the technology to provide feedback on user interface and results.

This is the very definition of fascism

As more and more countries like Japan, China and Denmark plan to introduce vaccine “passports” for their citizens, Americans are beginning to wonder if they, too, will have to show some sort of proof of vaccination or similar ID to travel, attend events, work or generally participate in society.

There aren’t many answers to this in the U.S., although the U.S. has vaccinated more people than any nation in the world. But the Biden administration is making one thing clear — the federal government won’t be the one issuing a vaccine credential, or storing citizens’ vaccination information in a database

“This is going to hit all parts of society, and so naturally, the government is involved,” Andy Slavitt, acting director for the Centers for Medicare and Medicaid Services, said during a White House COVID-19 briefing Monday. “But unlike other parts of the world, the government here is not viewing its role as the place to create a passport, nor a place to hold the data of — of citizens. We view this as something that the private sector is doing and will do. What’s important to us, and we’re leading an interagency process right now to go through these details, are that some important criteria be met with these credentials.”

Should private entities develop a vaccine ID system, it will be crucial to ensure that access to credentials is equitable and accessible, no matter what technology limitations a person faces at home, said Slavitt and White House press secretary Jen Psaki, adding that it should also be private and secure. Psaki said the Biden administration is mostly focused on creating guidelines that can be used as a basis for private sector endeavors.

“We expect, as Andy Slavitt I think alluded to, that a determination or development of a vaccine passport or whatever you want to call it will be driven by the private sector,” Psaki said. “Ours will more be focused on guidelines that can be used as a basis. There are a couple key principles that we are working from: one is that there will be no centralized, universal federal vaccinations database and no federal mandate requiring everyone to obtain a single vaccination credential; second, we want to encourage an open marketplace with a variety of private sector companies and nonprofit coalitions developing solutions; and third, we want to drive the market toward meeting public interest goals.”

Psaki offered no timeline for when the administration might issue such guidelines.

But President Biden in January did sign an executive order directing federal agencies to see how feasible it would be to connect COVID-19 vaccines to vaccine cards.

“Consistent with applicable law, the Secretary of State, the Secretary of HHS, and the Secretary of Homeland Security (including through the Administrator of the TSA), in coordination with any relevant international organizations, shall assess the feasibility of linking COVID-19 vaccination to International Certificates of Vaccination or Prophylaxis (ICVP) and producing electronic versions of ICVPs,” the executive order reads in the Federal Register.

Mr. Biden announced on Monday that 90% of American adults will be eligible for a vaccine by April 19, and that 90% of Americans will live within five miles of a vaccination site by that same date. Still, he and Centers for Disease Control Director Rochelle Walensky warned Americans not to grow complacent.

“We’re in the life-and-death race for the virus that is spreading quickly. With cases rising again, new variants are spreading and, sadly, some of the reckless behavior we’ve seen on television over the past few weeks means that more new cases are to come in the weeks ahead,” the president said in brief remarks from the White House.

Walensky’s warning was more dire, as cases begin to rise, despite vaccination efforts.

“I’m going to pause here, I’m going to lose the script and I’m going to reflect on the recurring feeling I have of impending doom,” Walensky said, appearing to grow emotional. “We have so much to look forward to. So much promise and potential of where we are and so much reason for hope. But right now I’m scared.”