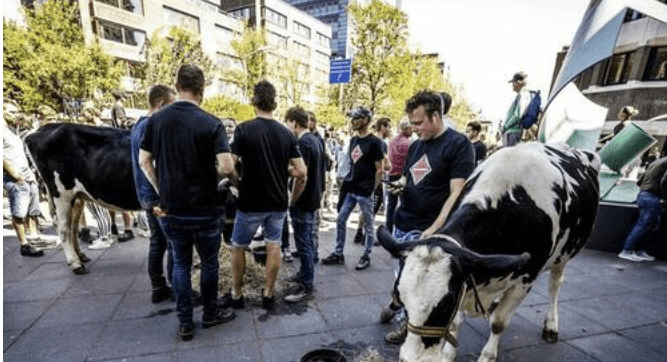 I think there are some misconceptions about what the reforms are about but there is no doubt that, given the timing,  this is yet another attack on food production.

Police have just fired shots at a Dutch farmer in his tractor participating in a blockade protest in Friesland.

The incident occurred at roughly 11:30 to 11:40 p.m. (GMT). Police are now claiming that the farmer attempted to ram into officers and vehicles. However, videos from the scene are telling a different story.

“At about 10:40 p.m., tractor drivers attempted to drive into officers and service vehicles. This happened at the entrance Mercurius/A32 in Heerenveen . A threatening situation arose. Warning shots were fired and targeted shots were fired,” Politie Fryslân tweeted following the incident. [translated from Dutch]

“A tractor was hit. A tractor drove away from the incident and was stopped shortly afterwards on Jousterweg. Three suspects have been arrested. No one was injured. The road is currently closed for the investigation.”

As per a video from TCS Editor-in-Chief Keean Bexte, who is currently reporting from the Netherlands, the farmer attempted to drive away from police when the shots were fired.

In a separate video, two officers can be seen aiming their firearms and following the tractor as it passes by before firing two shots.

A photo (if confirmed) shows bullet holes in the tractor’s frame, suggesting that police are using live rounds.

As previously reported by Bexte, Dutch farmers attempted to take rural routes to an undisclosed location late in the evening to set up a new blockade after police managed to shut down those that were started yesterday.

Since the orders were declared, police have been seen wearing military-style equipment and have taken to tear gassing protesters.

Despite the risk to their lives, Dutch farmers are still protesting the government’s career-destroying nitrogen pollution policy that will put a cap on emissions, especially in the farming industry.

He then points to a red handkerchief hanging off the side-view mirror of a construction truck, saying that it has become “a symbol of the protest here in the Netherlands — they’re flying off the shelves at every store, and every protester’s carrying one.”

“… Every farmer in this country is united against this government,” Bexte explains, “and they’re blockading the distribution centres of grocery stores to let the public know exactly where their food comes from and what will happen if Mark Rutte, Klaus Schwab, and the rest of the globalists get their way.”

Dutch farmers who have been protesting for weeks over the government’s radical plan to cut nitrogen emissions by 50% – 95% by 2030 have taken things to the next level – pouring manure on government offices in response to the plan which would cause widespread chaos – including the death of 1/3 of Dutch farms.

Pissed off protesters became aggressive with police last week, with angry farmers demanding that the Hague backtrack on their ‘green’ agenda.

Bloomberg also reported last week that several farmers showed up to parliament with cows in tow to protest the policy – with some threatening to slaughter them on the spot.

“If the nitrogen measures are adopted, one of these two ladies [cows] will not go home but will receive a one-way ticket to the slaughterhouse,” said farmer Koos Cromwijk in a statement to Dutch news agency ANP outside parliament (via The Counter Signal).

Last week Dutch farmers also blocked the border between Holland and Germany, while even bigger protests are slated for July 4.

Meanwhile, farmers in Spain are coming out against inflation for fuel and essential goods.

And what did the Dutch government have to say about the new law?

“The honest message … is that not all farmers can continue their business.“

In their infinite wisdom, the government of the Netherlands wants to impose new climate goals of reducing nitrogen output by 2030, which will force farmers out of business.

The Netherlands had even appointed a new Minister for Nature and Nitrogen! The minister, Christianne van der Wal has practically said that some farmers will have to give up their farms.

The target is designed to comply with EU rules on reducing nitrogen pollution. In order to meet the goals, farmers will have to downsize their businesses or shut down.

And the farmers are not happy about it.

Last week some 40 000 farmers took to a mass protest. Did you hear about any of this on the news? I bet you probably did not…

Farmers have taken to the highways, setting up blockades.

On 30 June Radio Genova tweeted: “Very angry Dutch farmers block border between Holland and Germany. Harsh protests in many Dutch cities after politicians’ decision to close dozens of farms and cattle ranches to reduce nitrogen by 30% – 70% to comply with EU regulations on nitrogen pollution” and attached the video below.

On 27 June Kees71 tweeted: “Meanwhile at the town hall in Lochem: farmers spread manure in front of town hall!” and attached the video below.

So let me get this straight. We are already looking at a worldwide food crisis as a result of skyrocketing fertilizer prices and the war in Ukraine (as Russia and Ukraine are major grain exporters, and that is now coming to a standstill).

The protests have of course been condemned by the politicians, but according to a poll, it seems like many people support the farmers.

The political party Farmer-Citizen Movement is ranking high in the polls. In fact, they are now the second-largest party in the Netherlands!

On 26 June Maurice de Hond tweeted: “Interesting similarities between the advance of BBB now and that of FVD exactly four years ago, which led to a result at #PS2019 in which the FVD became larger than the VVD” and attached the image below.

In Norway on 1 July 2022, several large food producers implemented massive price increases on food. For example, the price of Pepsi Max went up by over 30%. With inflation and skyrocketing fuel prices, things are not looking better for next year.

We will likely see even more expensive food next year, and unfortunately probably famines in some parts of the world.

So, what do the genius politicians in Europe do? They want to shut down farms because of climate change of course! That will surely help!

The cows are farting too much! That’s not a joke by the way. In New Zealand, they want to implement a tax on cow farts and burps!

I really don’t get this. We are facing a food crisis and they want to shut down farms in the name of climate change?

I guess they really want you to eat the bugs and be happy. They are working on making meat so expensive that the common people won’t be able to afford it.

Are you enjoying The Great Reset?

Peter Imanuelsen, also known as PeterSweden, is an independent journalist reporting on the “real news” that corporate media is ignoring.  The focus of his reporting is liberty and freedom.  You can follow Imanuelsen by subscribing to his Substack HERE.

This Guardian article is from December, 2021 and serves as background