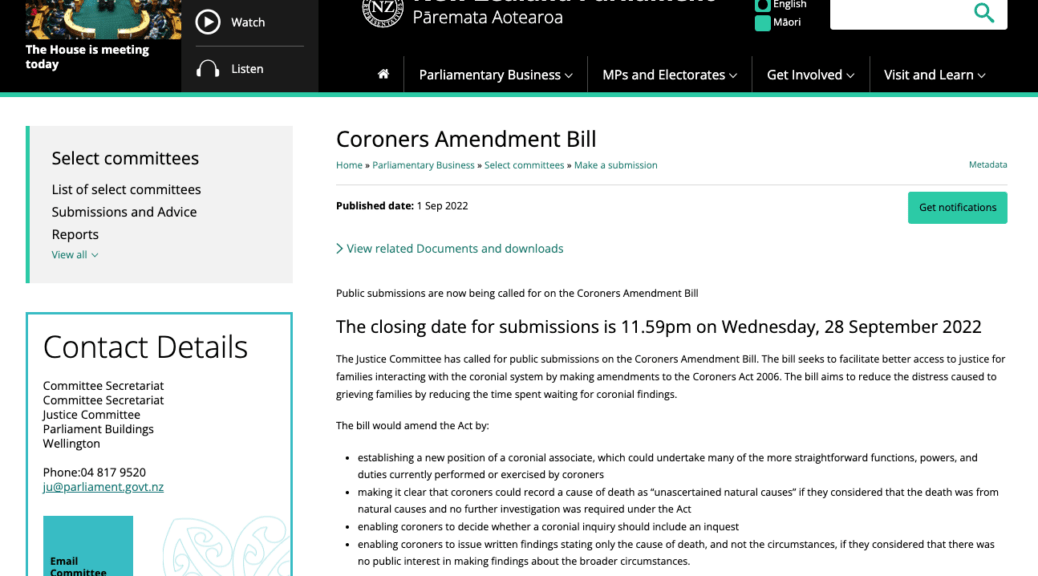 Quite by accident, browsing Telegram I stumbled upon this. Quietly, the government is changing the Coroner’s Act to make it easier for deaths to be recorded as “unascertained natural causes” so the death does not need to be investigated further.

This is being presented as “releasing pressure on the coronial system”.

I wonder what could possibly have put pressure on the system in recent times.

It couldn’t have anything to do with all those excess deaths since the rollout of the mRNA shots, could it?!

This is how it is being presented:

“The coronial system has long been under pressure, adding to the undue stress of New Zealanders seeking closure after experiencing the passing of a loved one.”

Excuse me if I go with this explanation:

“The change of concern is the ‘unascertained natural causes’ of death. They don’t need reporting on, and if they have an inquiry, details are all suppressed (seems… dodgy as if the government now trying to cover their tracks)”

The Coroners Amendment Bill has passed its first reading and will now be considered by Parliament’s Justice Committee. The Justice Committee will soon call for public submissions on the Bill.

“The coronial system has long been under pressure, adding to the undue stress of New Zealanders seeking closure after experiencing the passing of a loved one,” Minister for Courts Aupito William Sio said.

“By making these targeted changes to the Coroners Act 2006, we will create more efficient processes to clear the back log, and help many families and whānau who are experiencing unnecessary distress from the delays.”

The Coroners Amendment Bill will reduce the time it takes for certain types of cases to move through the coronial process, and free up Coroners’ time to work on reducing the number of active cases by:

to perform most of the functions, powers, and duties of Coroners;

“These amendments will help to ensure certain cases in the system can, where appropriate, be progressed more efficiently. The changes – particularly the new l Associate Coroner position – are also expected to relieve the pressure on Coroners by freeing up their time to enable them to focus on more complex cases,” Aupito William Sio said.

“This Bill’s target changes to the Coroners Act 2006, are designed to be progressed ahead of a review of the coronial system to ensure the review will not cause additional delays.”

The Bill also complements other work being led by the Ministry of Justice to improve the coronial system, including a project to better integrate tikanga Māori into coronial processes, and appointing clinical advisors to assist coroners.

Budget 2022 delivered operating funding of $28.5 million over four years and $1.6 million of capital funding to help reduce the coronial caseload. This will allow the appointment of four new permanent coroners and support staff.

“More must be done to improve access to justice for families and whānau, which is why we committed to a wider, longer-term review of the coronial system as announced earlier in the year.

“The scope and timing of this review are still to be determined, but it is my expectation that the review will involve engagement with a broad range of interested parties. Families and whānau will be at the heart of the engagement.

“Any changes that may result from this review could take some time to progress, so this Bill presents an opportunity to make some targeted improvements relatively quickly. I look forward to hearing people’s views on the Bill,” Aupito William Sio said.

This is from the official government site

The Justice Committee has called for public submissions on the Coroners Amendment Bill. The bill seeks to facilitate better access to justice for families interacting with the coronial system by making amendments to the Coroners Act 2006. The bill aims to reduce the distress caused to grieving families by reducing the time spent waiting for coronial findings.

The bill would amend the Act by: