It would appear that last year;s accord with Macron was not good enough and that the New Zealand government under Jacinda Adern wants to lead the world in the crusade against free speech.

Covid-19: Social media in the spotlight after misinformation

As Covid-19 spreads around the world, it can be daunting keeping up with the information. For RNZ, our responsibility is to give you verified, up to the minute, trustworthy information to help you make decisions about your lives and your health. We’ll also be asking questions of officials and decision makers about how they’re responding to the virus. Our aim is to keep you informed.

The Chief Censor says New Zealand has an opportunity to be leading the world in fighting against Covid-19 disinformation online.

Health Minister Chris Hipkins gave those responsible a serve at the 1pm briefing on Sunday after a racist and misogynist rumour about a woman breaking into an isolation facility had done the rounds.

He said it had reached a “new and concerning level”, and was “not only was it harmful and dangerous, it was totally and utterly wrong.”

But other than a good telling off, the government was limited in what action it could take to starve the online world of fake news.

Chief Censor David Shanks said Sweden had been teaching kids for nearly a decade how to both spot and verify misinformation.

He said New Zealand was world-leading with its response to the extremists using the internet as a weapon following the mosque shootings.

“The Christchurch Call was one of the first moves led out which really brought an integrated, transnational, governmental and industry accord in thinking about how we could deal with the weaponisation of the internet in terms of the spread of violent extremist material.”

“In a way some of the extreme disinformation and conspiracy theories could be seen as the next layer out from that and is, in a way, connected with violent extremism when you trace through to the origins of some of this material.

“I think New Zealand can and should have a role in leading some thinking about how we can deal with this sort of issue,” Shanks said.

Social media commentator Anna Rawhiti-Connell said the second wave of the coronavirus had split the online community, increasing both the attacks and the severity of them.

“Part of that is around just fatigue, people are weary and they are tired.

“There’s a lot of uncertainty and that will naturally create a splintering kind of effect.”

Patriotism was a very big part of the last conquering of Covid, she said.

“I think we have splinted far more than we did around that initial lockdown.

“We kind of got through a lot of that on the sort of spirit and smell of a patriotic oily rag, and this time around, I don’t know if that’s quite as strong, and so that does breed a much more fractious kind of environment.”

Rawhiti-Connell said throughout the second outbreak there was lots of racial overtones and people looking for something to blame.

Indigenous Rights advocate Tina Ngata said Māori were particularly vulnerable to the disinformation because of a deep-rooted distrust of the government and its failure to uphold treaty obligations.

“Some of the concerns are very valid and they don’t come from nowhere, they generally find fertile soil where there is disenfranchisement,” she said.

“That’s why we see it over in the United States, the working class are really engaged in some of these conspiracy theories and that’s because they do feel let down by the system.

“And there are whole communities that feel let down by the system here and Aotearoa as well.”

Honouring the Treaty in a pandemic

Ngata said the Māori pandemic response group Te Rōpū Whakakaupapa Urutā wanted to be more involved in the decision making and felt the decisions that were made were not as representative as they could have been.

“This is an opportunity for the government to reflect on why it’s picked up so well here in Aotearoa and what has been the government’s role in that disenfranchisement and the lack of trust because, you know, similar to any relationship, if the trust is in place, it doesn’t really matter what other people say.”

She said the government needed to acknowledge the role of the Treaty within the pandemic.

“There are some issues that feed into our trust relationships in the past and a lot of that, for Māori in particular, comes back to Treaty violations.

“Making sure that Te Tiriti is centred and upheld and honoured and not looked at as a ‘nice to have’ but looked at as a constitutional underpinning for all of our decisions as a nation moving ahead,” Ngata said.

Tech commentator Paul Brislen was alarmed at how many people relied solely on social media for their news when these platforms were not policed in the same way the mainstream media was.

“They claim to be a platform totally neutral, they have no control over it.

“Because the government buys into that that really gives them nowhere to go in terms of enforcement of decency or any of the things that aren’t in law but are in common practice that we get with professional media.”

Brislen said without someone to hold them accountable, the government did not have a leg to stand on. 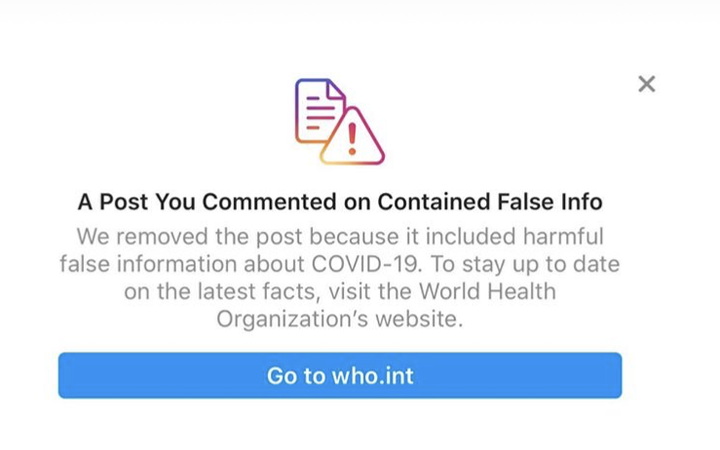 Instagram, however, has taken some action. It has teams actively removing posts that breached the Covid-19 policy.

“We remove content that could lead to imminent harm, and we’ve applied warning labels to millions of pieces of misinformation.

“Conspiracies around the virus continue to be fact-checked by our partners around the world, and we block vaccine-related hashtags which contain known misinformation to reduce its visibility on Instagram.”