I apologise for the wonky formatting; this small item has taken about 4 times as long as normal to put together from the first moment.

livestreams we decided to go on down and see for ourselves.

The media are praising the police for their “patience” and “calm response” to “aggressive” anti-COVID vaccine mandate protestors.

This could, of course be straight out of George Orwell and worthy of Soviet propaganda. While we are talking of the protestors this picture tells the tale. 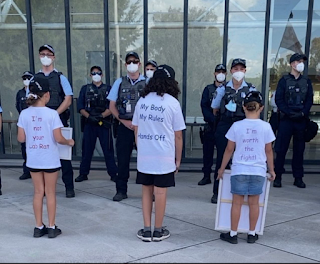 This was the scene last night.
The first impression we got was of a rainbow selection of people from all sorts of backgrounds. There were young and old, there were Pakeha, Maori, Thais, Chinese. Above all, the children… 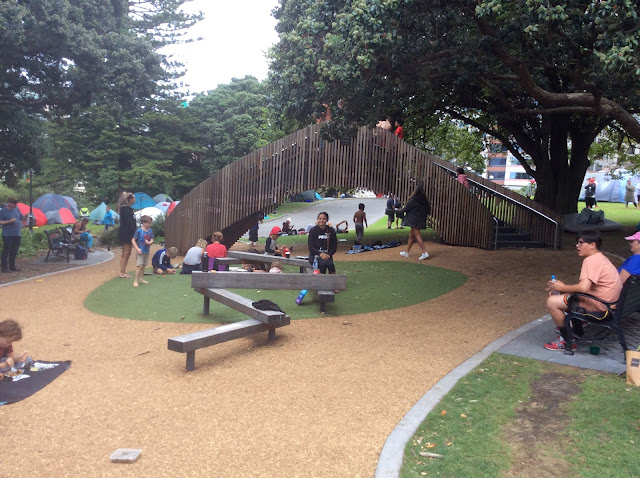 Despite everything that people had been through during the day there was a party-like atmosphere and even some exuberance. 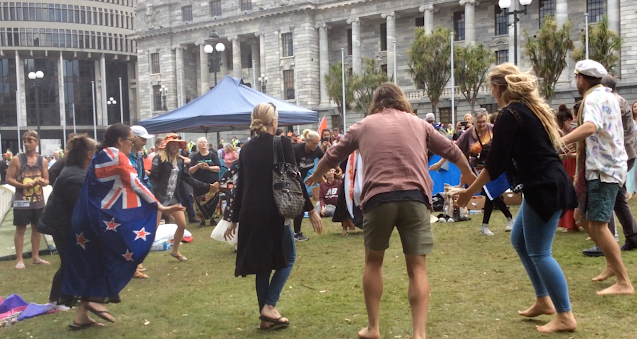 All of this came under the sombre observing eyes of the cops. 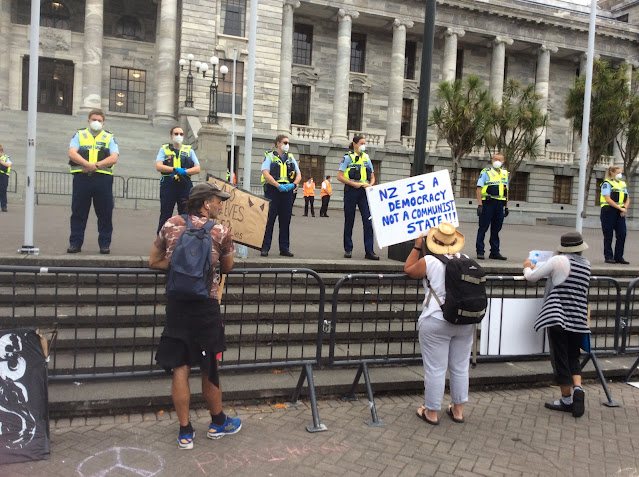 The media says ad nauseum that there is no central message uniting the protestors – that they are “rent-a-mob”, a collection of the “unwashed” and “unemployed” as one policeman said.
However, there was a central message that goes through everything; that is Jacinda Adern’s vaccine mandate have to go and indeed this government has to go.
Everyone we spoke to had their own grief, their own tale to tell, whether it was losing a job they loved or losing friends or relatives to the jab. 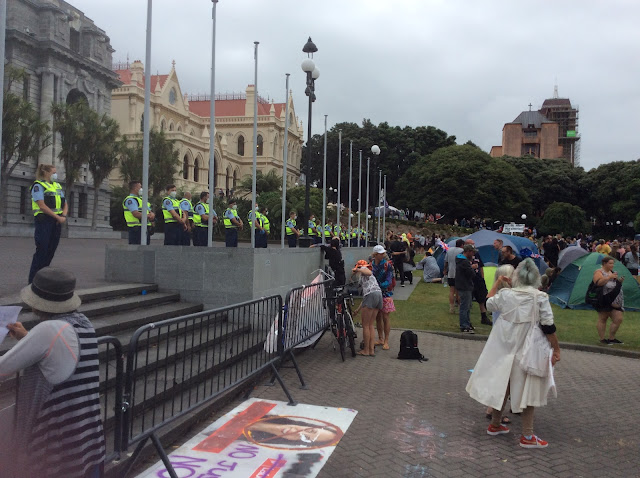 This is what media and some parts of social media selected by them had to say: We spoke to one woman who related the following:
Police closed ranks and moved in on the crowd. They had a tactic of identifying a target, going in and dragging them out on their backs and then turned over on the concrete.
There were a number of injuries reported – broken ribs and sternum.
Some of the people ended up in hospital.
One tent was broken into and the woman arrested leaving the children on their own.
One person we spoke to observed the pleasure some police (including policewomen) in what they were doing – “gleeful” was the word she used.
I do not have the numbers at my fingertips, but it seems over 120 arrests were made.
This appeared on Telegram:

WHEN ONE FEMALE POLICE OFFICER CAN DO THIS, WHAT WILL A RIOT SQUAD DO… 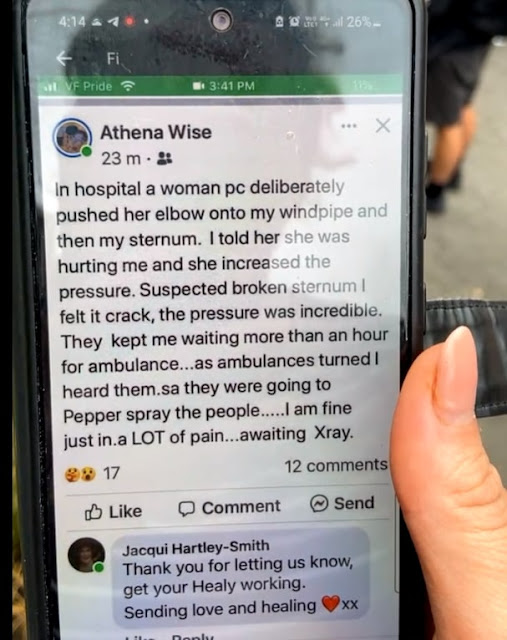 “For those of you watching my live, it was just as well I put my phone away when I did. Police pushed forward and I am now In hospital .. a woman PC deliberately pushed her elbow onto my windpipe and then my sternum.I told her she was hurting me and she increased the pressure. Suspected broken sternum I felt it crack, the pressure was incredible. Onscale of 1 to 10 it was a 10 never had pain like it. I SCREAMED AND SCREAMED…they pulled me out by my arms and injuring me further and them kept we waiting on all fours for more than an hour for ambulance…as ambulances turned I heard them.sa they were going to Pepper spray the people…..I am finejust in a LOT of pain…

This treatment of a 14 year-old boy is straight out of the textbook of the Israeli police and when used by American police it provoked months of rioting by BLM  and Antifa. 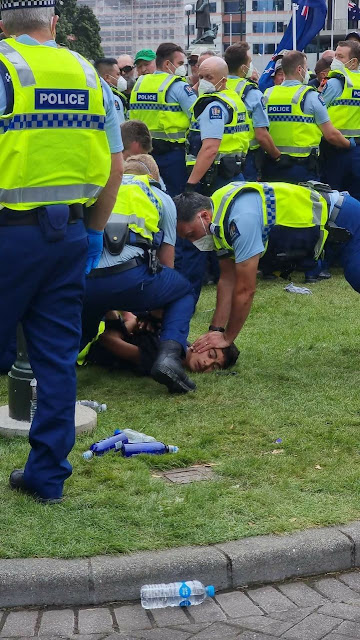 Today, New Zealand Police deliberately and brutally attacked citizens engaging in peaceful protest in front of Wellington’s Parliament House. Police, using pepper spray and scrum tactics, targeted and herded the crowd of civilians after locking the gates mid-morning to prevent them leaving the area.
The protesters, who were singing the New Zealand National Anthem and linking arms, remained remarkably calm under extreme pressure from the massive number of recruits from the NZ Police Training College and other Police resources.
Adults and children were targeted during the violent assault on citizens, with one 14-year old suffering a neck injury from the use of Police headlock tactics. Elderly men and women were dragged out from their peaceful protest groups, and dragged across grass and concrete before being arrested and taken for processing.
The charges against the protesters involved trespass, which was alleged by Speaker of the House Trevor Mallard and reiterated by Grant Robertson, Deputy Prime Minister of New Zealand.
Live video shows the aggressors to be New Zealand Police with the crowd overall being extremely good-willed.under intense pressure.
One media commentator noted that “I have never disliked Police in my life – until now!”, and it seems that the actions of Police being livestreamed around the nation have encouraged many hundreds more New Zealanders to join the movement.
Here is another description:
The police are doing shifts, the people are not.
The protesters were standing peaceful and then the police barged.
I watched the whole thing for 4 hours straight with a side on view.
They pulled a woman by her hair and her dress came off in the process and they arrested her naked. I watched them pull a young girl right in front of the camera when she was just talking to her parent and then supposed to go back into the outer area. They barged right at the point out of the blue when there was NO violence at all and grabbed her and cut her neck. There is a woman who was just putting her ph away in her bag and they unexpectedly barged again and they grabbed her and dragged her by her feet and then pushed their elbow into her sternum and cracked it and now she is in hospital. The other people they arrested got let go and are back on parliament grounds.
STOP LISTENING TO MAINSTREAM MEDIA!!! THEY ARE DECEIVING YOU.
We know as soon as they are about to barge cause you can see across at the mainstream media filming from the balcony. They run back to their camera like they know something is about to happen then about 5 mins later they start to barge.
There were police in tears at some of their colleges behaviour and said this is not right! There were 3 police that I know of that resigned on the spot. People can have a go at me over and over and I couldn’t care less! Video footage does not lie like photographs do! I know what I saw! NO ONE can tell me otherwise.
Police are just doing what they have been told to do.
But it’s their choice with what they do next.. I’m sad for some of the police and I’m really sad for our people!
It was a huge shock seeing people standing there linking arms singing the national Anthem and then watching out of the blue the barging and dragging people out by hair, feet or arms.
I prayed so hard for all involved and I cried my tears too. Wishing I could be there in support.
https://truthwatchnz.is/cv-injection-nz/nz-police-brutality-today-a-14-yo-boy-is-injured-restrained-by-full-body-force-on-his-head?fbclid=IwAR3fjphQOsHoKL8BYY5IGBOLxW_TnhUfN1gWLMJeoVpq6OM6hfwsvQMP_MI
VIDEO at the link: 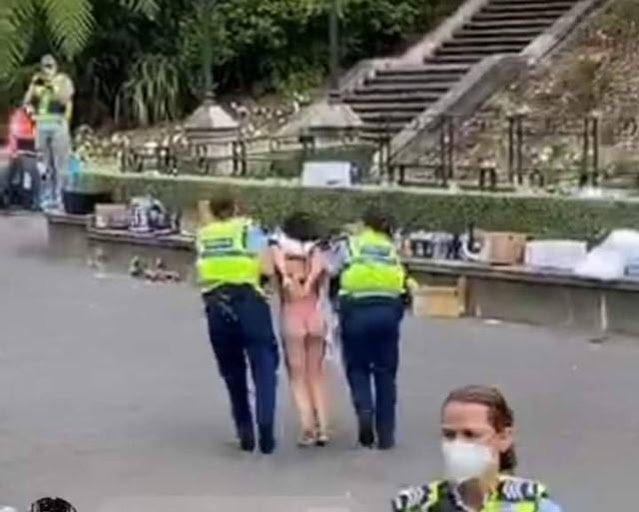 On this, this a departure from normal media coverage this appeared in the NZ Herald

Here is a screenshot from someone else being dragged away. She collapses a few seconds later. 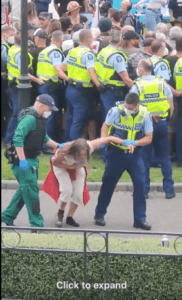 WATCH THIS VIDEO TO SEE THE POLICE TACTICS EXPOSED: 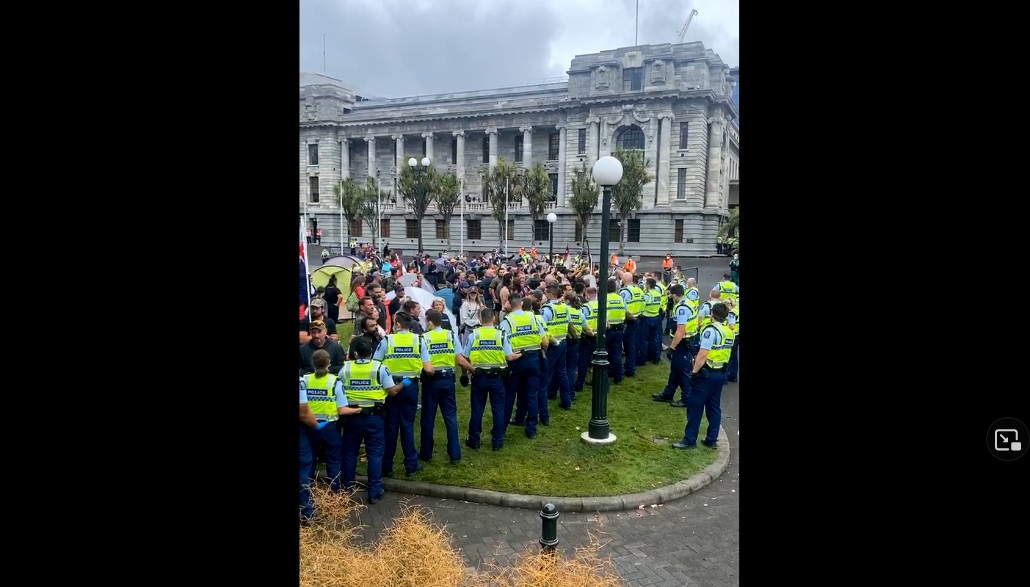 https://www.facebook.com/ChantelleBakerNZ/videos/292417952876527/
There is a lot more I could say about this but I want to get this information out “as is”

One thought on “The police turn brutal in Wellington, New Zealand”