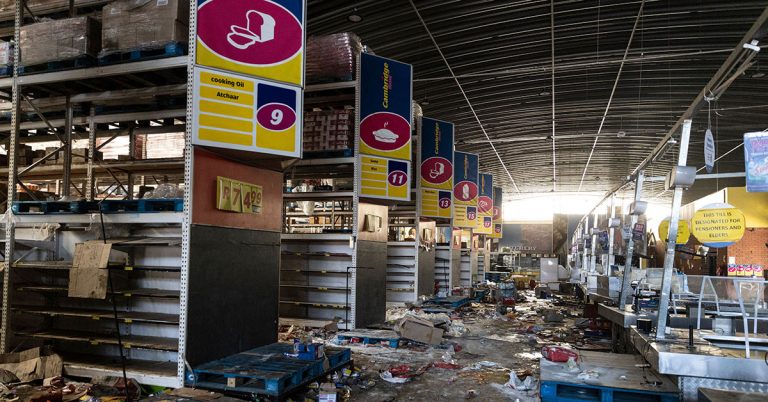 The agenda is deeper than just Zuma. It is well planned. The people steal all the food, ammo etc. everyone removed number plates from vehicles, thus cannot be identified. Then after everything is stolen, the buildings are set to light. Trucks are set to light who bring the food. In March last year the SA President said in a speech- we are joining the NWO. China has infiltrated Africa about 10 years ago. This is all planned

I’m in South Africa, east of Johannesburg, things are tense, went out to stock up on some fuel this evening. This morning I went to the local corner shop and the Police had instructed them to close doors. They waited for the cops to leave and kept on trading with a half door open. I admire our resilience across all of our peace-loving folk who can see through the orchestrated take down of our supply.

Dairy farmers in KwaZulu-Natal have had to pour hundreds of thousands of litres of milk down the drain since protest action, looting and vandalism started across the province in the second weekend of July.

According to Colin Wellbeloved, a milk producer in the Boston area of KwaZulu-Natal and chairperson of the South African Milk Producers’ Organisation (MPO), he and his neighbours have had to destroy 60 000l of milk over the past two days, because they were unable to distribute it.

“I am also concerned that retail milk stocks are going to decline alarmingly because of the logistical problems caused by the protesters. [Another concern is] that we find it increasingly difficult to get products such as animal feed delivered to the farms because of road closures and attacks by looters.”

Well-beloved added that he was extremely worried that a number of milk farmers would be force to exit the milk production industry because of the protest and ensuing vandalism.

According to him, profit margins in the dairy production sector were very tight already, and some producers would find it extremely difficult to financially survive this setback.

Widespread rioting and looting first broke out over parts of KwaZulu-Natal and Gauteng following the imprisonment of former president Jacob Zuma for contempt of court on 7 July.