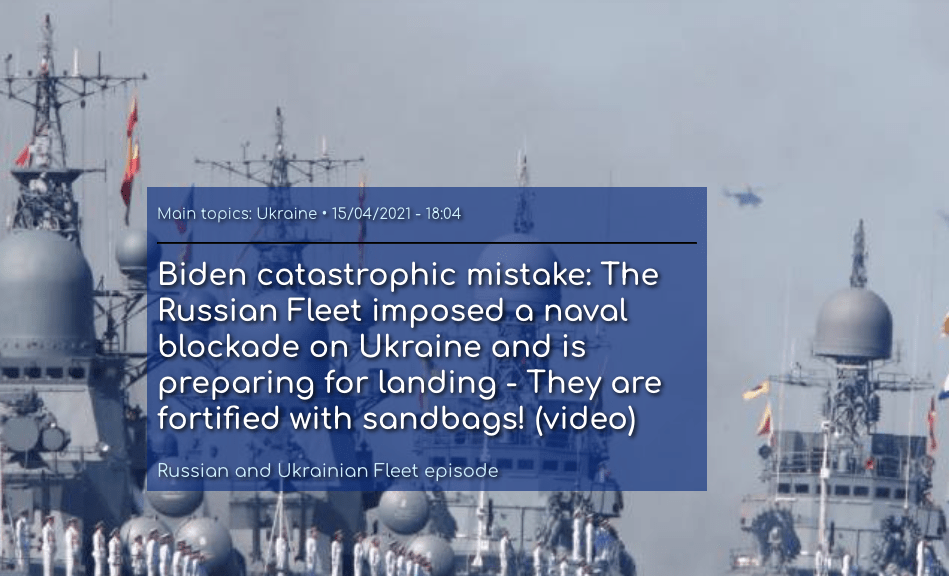 Biden catastrophic mistake: The Russian Fleet has imposed a naval blockade on Ukraine and is preparing for landing – They are fortified with sandbags! (video) 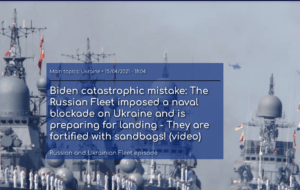 Russia has declared a full-blown act of war, imposing a naval blockade on Ukraine until October, closing the Kerch Strait and the Sea of ​​Azov.

This is a dramatic escalation of the security situation.

The mistake is 100% of Biden who thought Russia was bluffing. Eventually he was exposed and showed tremendous timidity both with the phone call to Putin and with the cancellation of the mission of American ships in the Black Sea. If he did not intend to send troops, then he should not have prepared Ukraine for war.

Russia has just imposed a naval blockade on the ports of Mariupol and Berdyansk.

Russia ready to land: Transports the Caspian Fleet to the Black Sea – “Knives on the sides” of Ukraine! (video)

It is a “pure act of war” and is treated as such by international law. No country can impose a naval blockade on the other except in a state of self-defense

We had mentioned that these areas are a target of a Russian landing.

Recently, there was a protest from Ukraine for the restriction of free navigation in the Black Sea.

Watch the video with the sandbags here

Closes the Kerch Straits until October

“Russia closes the strategically important Kerch Straits on the Black Sea to warships and foreign ships from next week until October 2021, closing the Ukrainian ports of Mariupol and Berdyansk.

An incident reportedly took place between a Ukrainian rocket and five Russian FSB ships in the Sea of ​​Azov.

The Ukrainian Navy reports that FSB ships tried to harass Ukrainian ships in the Sea of ​​Azov by making provocative and dangerous maneuvers.

US weakness and green light to Russia to launch invasion? – CNN: Destroyers will not enter the Mediterranean Sea λόγω for fear of escalation – Remain in the Aegean

The Ukrainian Foreign Ministry has reacted strongly to the announcement of a Russian naval blockade of the Kerch Strait and the Sea of ​​Azov. Kiev demands the immediate termination of the decision and the cancellation of the illegal naval “quarantine” in the waters of the Black Sea.

“Such actions by Russia are another attempt to violate the principles and laws of international law. Russia has been trying to usurp Ukraine’s sovereign rights as a coastal state since Ukraine has the right to regulate navigation in the Black Sea.

We call on our international partners to increase political and diplomatic pressure on the aggressor state to overturn the naval blockade and end the escalation in the Azov and Black Sea region.

This Russian act is a major violation of the freedom of navigation guaranteed by the Convention on the Law of the Sea. According to the Convention, Russia must not obstruct or obstruct the sea voyage through the international Straits to the ports of the Sea of ​​Azov.

Russia is now escalating not only on land but also at sea. It transports ships from the Caspian Sea and reinforces its military forces in the Black Sea-Azov region without international law. In violation of international law, it closes the area for warships and ships of other states.

In Donetsk, meanwhile, Russian forces are fortifying buildings and sandbag areas in preparation for war in urban areas.

At the same time, the military was ordered to prepare hospitals and administrative buildings for a possible armed conflict. This is the official briefing from the Donbas authorities.

At the same time, shelters are being inspected, and military forces are adding extra beds to hospitals and sandbags to administration buildings and critical areas within the city.

Even files are withdrawn from “state” institutions. The preparation of the shelters has started and in some hospital centers they are preparing the premises with the addition of extra beds.

An order was issued to the Donetsk Regional Traumatology Center to release 60% of the beds and to arrange shelters by the 21st of the month.

Russia-Ukraine tensions are at an all-time high as US President Joe Biden addresses a short speech on Russia.

The sermon comes shortly after the US declared a state of emergency.

Meanwhile, in Kiev published maps of shelters for the civilian population in the event of hostilities.

Ukraine recently sent an ultimatum to the US “either you put us directly in NATO or the EU or we acquire nuclear, there is no other solution”

Watch the Biden sermon in the video shortly

The Kiev administration (KCSA) updated and published the map of shelters in the city and its surroundings.

These shelters are intended to accept civilians in the event of a military conflict. The report is official from the Ukrainian site.

“The map includes shelters for civilians, underground spaces and networks, underground parking and other buildings that can accommodate people.

The situation is dramatic

The security situation is dramatic. Belarusian forces are speeding up and strengthening existing ones on the border with Ukraine.

The Polish-Lithuanian border was closed in Grodna.

Ukraine has decided to start military exercises in the Sumy region on the border with Russia. They officially speak of “anti-terrorist exercises”.

The pictures you see are from Donetsk with the installation of sandbags.

The civilian population is already leaving the city as you can see in the photos. Queues have formed at the border with Russia.

The British Foreign Office summoned the Russian ambassador shortly after the US sanctions.

This was followed by Poland, which in turn invited the Russian ambassador. 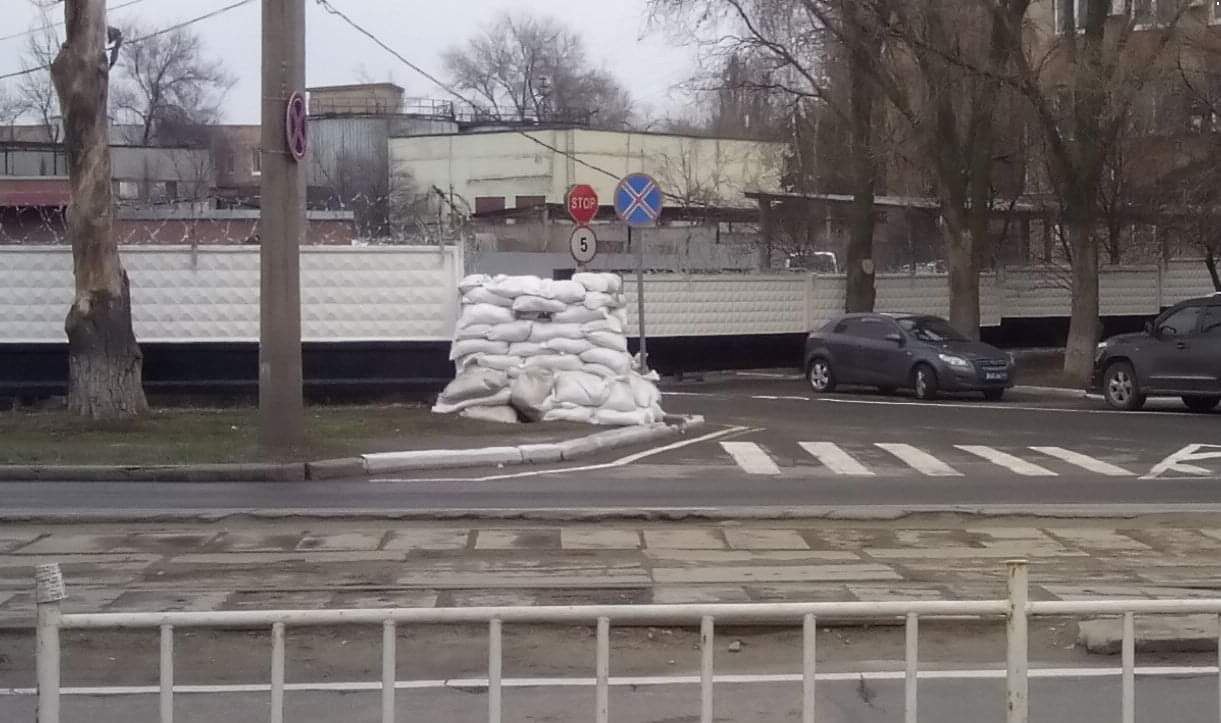 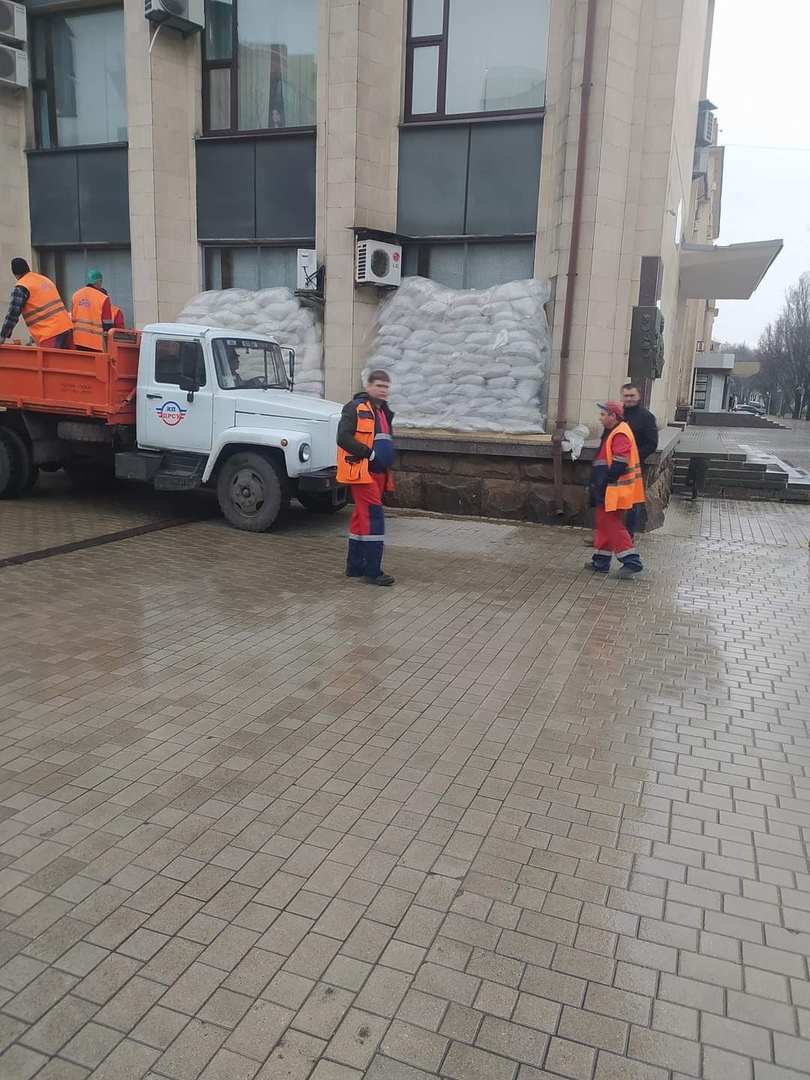 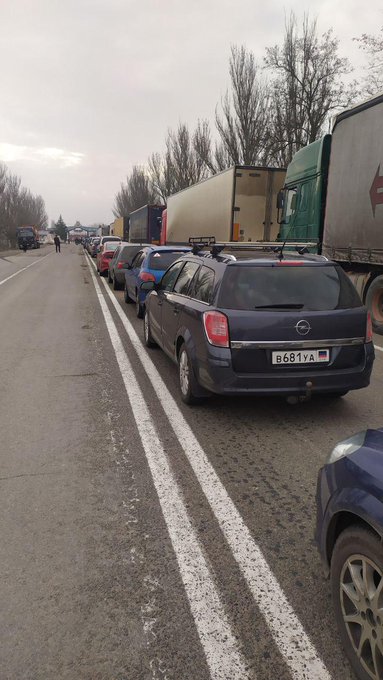 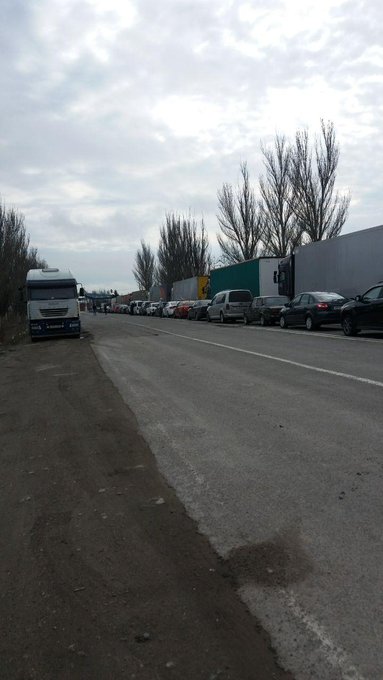 US seeks to oust Russia from markets: “It is forbidden to buy Russian bonds”

Washington is trying to hit Moscow with (small) debt

For the first time, the US is trying to create a problem in the Russian economy at its strongest point, which is its small public debt, and is starting to try to prevent the Russian Federation from borrowing (like all countries) from the markets:

Prohibiting US institutions (ie pension funds) from buying Russian bonds directly, which means that they can only buy them on the secondary market.

This is of course the beginning. Washington will continue to do so by extending it to all markets around the world with the well-known system of the threat of sanctions.

The US is hitting Russia’s foreign funding

Under the presidential decree, the US Treasury Department prohibits US financial institutions from buying Russian bonds directly after June 14.

These are the American “pension funds” which are the “backbone” of serious borrowing on the planet. Without them, in essence, a “signal” is given to everyone not to lend.

The Treasury Department also imposed sanctions on 32 organizations and individuals accused of trying, on behalf of the Russian government, to “influence their 2020 US presidential election,” according to a White House statement.

And in partnership with the European Union, Canada, the United Kingdom and Australia, the US government is also imposing sanctions on eight individuals and entities “linked to the ongoing occupation and repression in Crimea”.

The White House says the case is being handled “through diplomatic and military channels, as well as through intelligence channels,” over allegations that Russia offered a reward to the Taliban for attacking US troops in Afghanistan.

This is Washington’s response to the alleged 2020 giant cyber attack (so Biden Americans claim Moscow denies it) that exploited software developed by network management company SolarWinds, which is used in both the public and private sectors.

The cyber-attack continued for days, as the Americans say, and hit ministries and federal agencies.

The methods used referred to a state entity. Many American media reported on the Russian group “APT29”, also known as “Cozy Bear”. According to the American press, this group belongs to the Russian Intelligence Services and has carried out cyber attacks during the presidency of Barack Obama, who was of course the president of the Democrats.

US Ambassador to Russia John Sullivan has been summoned to the Russian Foreign Ministry in connection with new sanctions imposed by Washington on Moscow. For the American side, a tough conversation is imminent, said the official representative of the Russian Ministry of Foreign Affairs Maria Zakharova.

“The US ambassador has been summoned to the Russian Foreign Ministry. “We will additionally inform you of the outcome of this conversation, which will be tough for the American side,” Zakharova said.

At the same time, the representative of the Russian Ministry of Foreign Affairs stated that Moscow will soon announce its response to the new US sanctions and that at the moment the experts are preparing the answer.

“Our answer will be irrevocable, it will be formed, You will find out, I think very soon. “Our experts are currently preparing it ,” Zakharova said.