Horowitz: Why every red state has an obligation to fight hospitals killing patients on ventilators 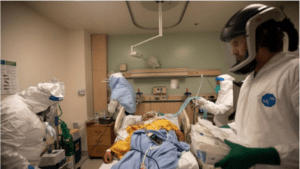 The family of Sun Ng will definitely have a meaningful Thanksgiving this year thanks to an attorney, a judge, and a doctor who bucked the system and enabled him to get ivermectin when he was at death’s doorstep. Imagine how many thousands of others are missing at this year’s Thanksgiving dinner thanks to the satanic effort to block this lifesaving drug – both outpatient and for those close to death?

Sun Ng, a contractor from Hong Kong, was visiting his grandchildren in October when he caught COVID-19. Ng was admitted to Edward Hospital in Naperville, Illinois, on Oct. 14 and was placed on a ventilator several days later. Like thousands of other patients, the hospital offered Ng no viable hope of survival but bitterly fought the use of ivermectin, even with the family’s own doctor, at their own cost, and with their own liability. Ng’s daughter, Man Kwan Ng, sued the hospital in DuPage County Circuit Court for the right to have Dr. Alan Bain administer a regimen of ivermectin.

According to a court affidavit, at the time Ng was “in the same state for many, many days … critically ill,” and a nurse suggested that Dr. Ng “stop all this aggressive care and let [her father] die naturally.” On November 5, after Ng was on a ventilator for three weeks, DuPage County Circuit Court Judge Paul Fullerton ruled in favor of the family and allowed Dr. Bain to administer 24mg doses of ivermectin from Nov. 8 through Nov. 12. The result? Within five days, he was able to breathe without the ventilator and on Nov. 16 walked out of the ICU. By this past Sunday, Ng was breathing without supplemental oxygen on a regular hospital floor.

Shockingly, the lawyers had to go through five different appearances in this case just to save this man’s life from a hospital that senselessly blocked lifesaving treatment. Originally, the judge dissolved his order because the doctors lied and said the patient was getting better. Then they blocked Dr. Bain from administering the ivermectin because he wasn’t vaccinated. According to reporter Mary Beth Pfeiffer, Judge Fullerton overruled the hospital again because he had testimony from a hospital doctor who estimated that “someone in his condition being on a ventilator like that has a 10 or 15 percent chance of survival.”

Ralph Lorigo, the lawyer on this case, told me that the patient was able to extubate himself from the ventilator, yet the hospital is still appealing the decision! How dare this man live! “You shouldn’t have to have a lawyer to come out alive,” said Lorigo in an interview with TheBlaze.

Shockingly, the hospital attorney, Joseph Monahan, said, “We continue to strenuously object to the false science narrative that is being given to the court without basis.”

Lorigo told me that he has been retained on 129 cases dealing with ivermectin denials, but in the vast majority of them he can’t even complete the court filings before the patient passes away. However, in the cases where he had time to fight it and win in court, he almost always succeeds in saving the patient. “Of all the cases I won and the patient was able to go through the full course of ivermectin, the patient is home and healthy,” declared Lorigo.

Unfortunately, most of these stories don’t have a happy ending thanks to the failure of governors and attorneys general to enforce the law and thanks to obtuse judges. Tarrant County Sheriff’s Deputy Jason Jones is dying of COVID at Texas Health Huguley Hospital in Tarrant County because the hospital has fought tooth and nail to block ivermectin. His wife sued in court and originally won at the district court level, thanks to the help of Lorigo’s law firm. However, when the family was about to get Dr. Mary Bowden to administer the ivermectin, the hospital appealed the decision and got the lower court’s ruling stayed. Emily Miller reported last week that the hospital wrapped a towel around Jason’s feeding tube so that his wife, Erin, couldn’t administer the drug herself.

Where is Gov. Greg Abbott? Where is Attorney General Ken Paxton? Why is the legislature not convening an emergency session to deal with the thousands of people being denied care, while these same hospitals prescribe only three drugs: remdesivir, baricitinib and tofacitinib – all of which either have FDA black box warnings for blood clotting or NIH warnings for kidney failure and liver toxicity. I have had families of patients reach out to me and tell me their loved ones had their bags of vitamins confiscated by the hospital.

Consider the following sickening juxtaposition: Catholic hospitals must now, according to the courts, perform chemical castration at the behest of a patient – even if it’s against their conscience and medical judgement. At the same time, they cannot only deny ivermectin – a Nobel Prize-winning, FDA-approved drug – as the last choice, but actively block the patient from using his own.

There is an immediate need for every attorney general to do battle with these hospitals and every legislature to pass a law specifically barring hospitals from blocking any patient from seeking the use of an FDA-approved drug at the direction of a physician to treat COVID. Hospitals cannot be allowed to become prisons where patients are denied rights they would otherwise have.