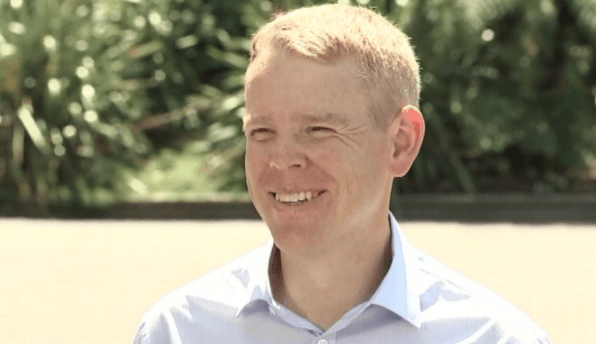 Chris Hipkins is the sole nominee for the Labour Party leadership and is therefore positioned to become New Zealand’s next Prime Minister.

Speaking to media for the first time since his nomination, Hipkins said he is feeling “very good”.

“I set out when Jacinda Ardern announced her resignation that I would play my role in working with the Labour team in Parliament to ensure that we strove to reach a consensus about who was best to lead Labour and therefore New Zealand forward,” he said.

“I am absolutely humbled and honoured that in those conversations I have had incredibly strong support from my caucus colleagues, my Labour team, and that that consensus has emerged.”

“I have known him for a number of years. I have worked alongside him closely. He will do an exceptional job. To see the caucus be absolutely united in their support for what will be a fantastic Prime Minister, I am delighted.”

She said he didn’t need any wise words of wisdom from her.

Hipkins also told media that Labour had gone through the leadership process with “unity” and the party will continue to be unified.

The incoming leader wouldn’t comment on policy or positions, including who will be his deputy, but did say Grant Robertson will remain the Finance Minister if he wanted it.

Hipkins said he didn’t offer anything to his colleagues to get their support for the leadership.

“It is a big day for a boy from the Hutt,” Hipkins told Newshub when asked how it felt to be becoming Prime Minister.

But he said it is a big responsibility being the Prime Minister and the weight of that is still sinking in.

He’s come back from the summer break energised and refreshed. Ardern said she didn’t have enough energy in the tank to commit to another term in office.

Hipkins believes Labour can beat National and bring back voters who may have drifted away from the party over the previous term.

He said New Zealanders have seen the work he has done, including over the past two years which was when he was the COVID-19 Response Minister.

He said Ardern had been subject to “intolerable and unacceptable” behaviour and vitriol as Prime Minister and accepted he is opening himself up to a lot of scrutiny and criticism.

“Jacinda Ardern has been an incredible Prime Minister for New Zealand. She was the leader that we needed at the time we needed it,” he said, before noting her leadership through a terrorist attack, a natural disaster and a global pandemic.

“It has been great to be able to talk to him. I am looking forward to catching up with him I hope in person fairly soon.”

Hipkins still needs to receive the Labour caucus’ endorsement at a meeting of MPs before he officially becomes the leader.

“The Labour Party caucus will meet at 1pm on Sunday to endorse the nomination and confirm  Chris Hipkins as Party Leader,” Chief Whip Duncan Webb said.

If or when that occurs, Prime Minister Jacinda Ardern needs to tender her resignation to the Governor-General and Hipkins needs to be sworn in. Hipkins would be New Zealand’s 41st Prime Minister.

It means Hipkins will likely also lead Labour into this year’s election. In one of her last moves as Prime Minister, Ardern on Thursday set the election date as October 14.

It’s not yet clear who the deputy leader could be. However, Newshub can confirm Kiri Allan has ruled herself out.

Carmel Sepuloni, who is being touted as a potential deputy candidate, told Newshub that Chris Hipkins is “absolutely the right choice”.

She said having just one nominee shows how unified the party is.

Sepuloni wouldn’t address speculation she will be the deputy leader. The role will be decided by caucus at a meeting on Sunday, she said.

“I don’t want to talk too much to it as I think it’s very important that we respect the integrity of the process.”

“I’m so looking forward to working with you to advance Labour values and policies. You’re going to do an amazing job. I’m so proud of our whole Caucus today. A seamless transition in under 48 hours is an incredible effort.”

The Green Party, which has a cooperation agreement with Labour, has welcomed Hipkins’ nomination.

“Together in Government, the Greens and Labour have made good progress to address some of the key challenges facing Aotearoa. But we know there is a lot of work to do.

“In the months and years ahead, we look forward to working with the next Prime Minister to deliver Green Party priorities to end poverty, take bold climate action, and protect our native wildlife.”

Co-leader James Shaw said he has known Hipkins for many years and worked with him during their time in government.

“What I have seen in that time is someone dedicated to making Aotearoa a better, fairer place.

“Over the last five years, Chris has taken on some of the toughest jobs in government and delivered some important changes.

“Chris will make an excellent Prime Minister and we look forward to continuing our work together, for the rest of this term and the next.

“We will not be commenting further until Chris Hipkins’ nomination has been endorsed by the Labour Party caucus tomorrow.”

National leader Christopher Luxon congratulated Hipkins on his elevation, but he doubts just changing leaders will “do enough for the New Zealand people”.

“Chris Hipkins has been part of a Government which has spectacularly failed to get anything done,” he said. “What New Zealanders really need is a National Government that will get things done.”

“That means a Government that will be focused on them and single-mindedly focused on reducing the cost of living, making sure we can raise incomes for all, that we can restore law and order and that we can deliver better health and education.”

The ACT Party has also responded to Hipkins’ nomination.

“For the sake of all Kiwis, incoming Prime Minister Chris Hipkins needs to show they’re prepared to deliver on substance instead of snowing New Zealand with spin,” said leader David Seymour.

He called for Hipkins to dump “fantasy policies” like “the media merger, divisive three waters reforms, so-called Fair Pay Agreements, income insurance that is really a jobs tax, and all of the wasteful spending that is driving inflation”.

“ACT hopes that Chris Hipkins can move on from Labour’s pantomime policies that have made life harder for Kiwis. If they can’t, Kiwis can rest assured that in 266 days they can vote for real change and get the government they deserve.”

Hipkins’ ascension follows Prime Minister Jacinda Ardern announcing on Thursday that she would be standing down as she didn’t have the energy to commit to another term in office.

Heir apparent and current deputy Prime Minister Grant Robertson swiftly ruled himself out of the race.

On Saturday morning, he released a picture of him and Hipkins.

“My mate Chippy has been there through thick and thin. He is experienced and deeply grounded in Labour values. When I think of him, one of the first things that pops into my mind is that he is an amazing Dad. His care and love for his kids is something I so admire.

“He is going to be a great Leader and PM. Still a bit of our process to go, but very proud of our Labour team!”

“Chris is decisive and will be an incredibly strong Prime Minister. He is extremely competent, with a track record of delivering for New Zealand as one of our most senior ministers over the past six years,” she said.

“Our team are a deep pool of talent, unified in our values and approach, who will continue to work hard every single day to make sure the voices of all New Zealanders are heard at the decision making table.”

“Having worked with you for the last 15 years, as Whips and co-leading our employment, education and training and youth crime work programmes, I know that you will make an exceptional Prime Minister of NZ.

“U have an incredible political nous and instinct, are decisive and know how to navigate Govt – both inside & out. Off the back of the exceptional leadership of Jacinda & Grant, I’m confident that Chris has what it takes to take NZ forward. Now let’s get on with the mahi!”

“We were all very, very tight in our caucus and we are really pleased with the outcome. This is fantastic.”

She said there were lots of discussions in the background, but “ultimately the right decision has been made”.

Shanan Halbert is “really looking forward to getting on with it” and confirming Hipkins as the leader.

“We are united as a caucus and we are ready to get on with the business.”

What we need to remember about the otherwise forgettable Mr. Hipkins

Government may ‘have to go out and find’ unvaccinated people, New Zealand official says

‘Of course, I want every New Zealander to come forward,’ New Zealand COVID-19 Response Minister Chris Hipkins said, ‘but human behavior suggests that there will be some people that we have to actually really go out and look for.’
In an interview in which he confirmed that a “handful” of “severe” adverse reactions to the experimental Pfizer jab had been reported, New Zealand’s COVID-19 Response Minister suggested that his government would need to “go out and find” any Kiwis who were still unvaccinated next year.

Hon. Chris Hipkins, a member of parliament in New Zealand’s House of Representatives and the country’s minister for COVID-19 response, told The AM Show Tuesday that the injections were currently being rolled out to those in the over-65 age category and affirmed that some New Zealanders had experienced severe reactions to the shot.