Johns Hopkins University held a simulation back in 2017 which was an exact predictor of what we are seeing now. Although this was first talked about last November this is the first I have heard about it, so I am sharing all I know about this.

I shall be posting an interview with Dr.Judy Mikovits separately.

The “SPARS Pandemic 2025 – 2028 – A Futuristic Scenario for Public Health Risk Communicators” (back-up here) was a simulation at The Johns Hopkins University, back in October of 2017. And we all know by now what happens to simulations – they become real. According to the World Bank, COVID-19 (SARS-CoV-2) is a “project” that is planned to continue until the end of March 2025.

Here’s a screenshot below (source and back-up): As soon as COVID-19 will over, in the spring of 2025, a new Coronavirus PLANdemic will start in the fall of the same year. In this simulation, they chose the name SPARS, based on the city where it first appeared (St. Paul), but they will probably go with a different name when the time comes.

It is interesting to note that SPARS is going to be a new coronavirus, which means COVID-19 “project” is never going away. It will continue for as long as WE THE PEOPLE allow it to continue.

The SPARS PANDEMIC 2025 – 2028 simulation also mentions that in 2021 the coronavirus will mutate to animals in South-East Asia, which will need to be sacrificed in order to stop the mutation.

We’ve already seen this many times in the past, with various plandemics. Rounding up animals in poor countries and sacrificing them to stop an alleged virus mutation results in poverty and famine in those regions, and only God-knows how many human deaths.

In the 2017 “simulation,” a vaccine called COROVAX (and which is also called CORAVAX once in the paper) is proposed as the solution to stop the pandemic. Strangely enough, a vaccine named CORAVAX was developed in real life almost three years later by Matthias Schnell, PhD, Director of the Jefferson Vaccine Center.

Also, a company called COROVAX LTD was incorporated on March 12th, 2020, in the UK, by the British professor Angus George Dalgleish, who is famous for his HIV/AIDS research.

I don’t know if there is any connection here, but I thought it was interesting enough to mention, since it has been long speculated that SARS-CoV-2 has been manmade and spliced with HIV in order to become more infectious.

It is, of course, very plausible (and probable) that professor Dalgleish decided to start working on a vaccine for COVID-19 and chose the name COROVAX for his company, because that’s what it does: a coronavirus vaccine. Nevertheless, the coincidence is striking.

As for the probability of SARS-CoV-2 being manmade and spliced with HIV/AIDS, please read this short excerpt:

Many in the scientific community were shocked when the acclaimed Luc Antoine Montagnier appeared on the French cable TV show, CNews, on April 17, 2020 to say that the virus that causes COVID-19 is manmade and that elements of HIV and Plasmodium falciparum, a parasite that causes malaria, are found in the coronavirus’s genome.

“We were not the first since a group of Indian researchers tried to publish a study which showed that the complete genome of this coronavirus [has] sequences of another virus, which is HIV.”

The research that Montagnier refers to was posted on the science website Biorxiv January 31, 2020, and has since been withdrawn.

“We found 4 insertions in the spike glycoprotein (S) which are unique to the 2019-nCoV and are not present in other coronaviruses. Importantly, amino acid residues in all the 4 inserts have identity or similarity to those in the HIV-1 gp120 or HIV-1 Gag …

The finding of 4 unique inserts in the 2019-nCoV, all of which have identity /similarity to amino acid residues in key structural proteins of HIV-1 is unlikely to be fortuitous in nature.” (Source)

The video also mentions a company named CODEX DNA, which promisses to be the solution to the COVID-19 plandemic. They are selling a device called “Synthetic biology workstation.” The device is called BioXp™ and it is capable of “building biology,” which sounds a lot like cloning to me.

And if you read the description, that’s exactly what it claims to do:

“Say hello to the BioXp™ system, and say goodbye to waiting weeks for synthesized genes. The BioXp™ system is the world’s first and only synthetic biology workstation for building libraries, gene fragments, clones, and more.”

So what is the purpose of all this? Why are they doing it? Ultimate Proof:Covid-19 Was Planned To Usher In The New World Order

Watch everything mentioned here and some more in the video below. Diana Lenska’s video is being supressed. Let’s make this thing go viral: 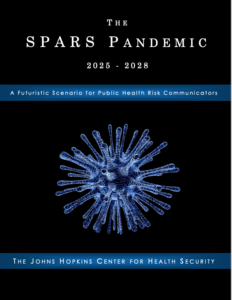 A PDF of the SPARS Pandemic simulation can be found HERE
What follows is some background that has come out on this:
Mike Adams
SPARS simulation predicts vaccine ZOMBIE wave of neurological disorders

This information, however, has been out since November, 2020 and was covered by Ryan of the Last American Vagabond.

The “SPARS Pandemic Of 2025” Simulation & The Dangerous Bipartisan Vaccine Agenda
The Last American Vagabond
However, what has led to this going even wider was a program done by InfoWars.
Gen. Flynn has spoken out on this.
General Flynn Calls For Investigation Into SPARS 2025-2028

EVIDENCE OF THE BIGGEST CRIME IN HUMAN HISTORY – THE SPARS “SIMULATION”