Yes, these statistics DO bother me – if they are true. 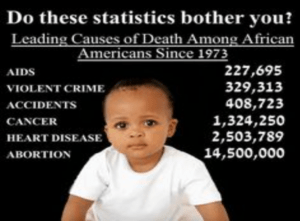 Throughout my life I have been somewhat agnostic about the subject of abortion (I still remember debates that raged on campus in the mid-70’s that I took no part of).

I have always seen it as a moral conundrum that every woman (or every couple) has to grapple with.

We don’t inhabit a world any more than bothers with morals and ethics. We live in a world of full-term abortions and the willy-nilly assertion of women’s “right to choose”, WHATEVER the circumstances.

I was shocked by a video which I can’t find it where a woman, cheered on by her luciferian friends that screamed “if I get pregnant…suck it out”. I still do not have any absolutist views but am seeing it as symptomatic of a world in terminal moral decay.

These two articles indicate that there is a link between the movement and racism and eugenics.

My response concerns Ray Miller-Still’s recent pro-abortion article, which articulates how women of color and poor women are in need of clinics like Planned Parenthood to provide abortions for them. Planned Parenthood was founded by the late Margaret Sanger. Sanger began the movement by speaking to many groups, including the wives of Ku Klux Klan group members, who were also organized for white supremacy. There is access to much, rather interesting, uncovered information about her and her organization which began circa 1921. I can barely touch on the topic of Margaret Sanger, and will only be able to touch upon it here.

Margaret Sanger got in tight with the Ku Klux Klan circles, and cozied up to more like them. The following quote from the book “Killer Angel” discovers who some of the other friends in her new movement were:

“In April of 1933, The [Birth Control] Review [Margaret Sanger’s magazine], published a shocking article entitled “Eugenic Sterilization: An Urgent Need”. It was written by Margaret’s close friend and advisor, Ernst Rudin, who was then serving as Hitler’s Director of Genetic Sterilization and had earlier taken a role in the establishment in the Nazi Society for Racial Hygiene. Later in June of that same year, [The Birth Control Review] published an article by Leon Whitney entitled, “Selective Sterilization”, which adamantly praised and defended The Third Reich’s pre-holocaust race purification programs.”

Sanger openly advocated for eugenics. In her book, “The Pivot of Civilization”, she says, “Eugenics suggests the reestablishment of the balance between the ‘fit’ and the ‘unfit.’ The birth-rate among the … finer stocks of humanity is to be increased by awakening among the ‘fit’ the realization of the dangers of a lessened birth-rate in proportion to the reckless breeding of the ‘unfit.’ (The Pivot of Civilization by Margaret Sanger, Ch. VIII, paragraph 12.) . From this type of writing, she became dubbed by the awareness concerning her advocacy, which hailed as “More children from the fit, less from the unfit.”

Ms. Sanger backed up that mentality of wanting some kind of a bigoted supreme race in much of what she said and did, and it becomes more clear the more one studies her. Take her stance voting rights: “We can all vote, even the mentally arrested. And so it is no surprise to find that the moron’s vote is as good as the vote of the genius. The outlook is not a cheerful one.”

Margaret Sanger used deception and propaganda to fool the black population into believing that she and her movement were working toward helping them, although her talk about them was disconcerting and of a racist bent.

On the Sanger [Blacks] Project, she said, “The most successful educational approach to the [blacks] is through a religious appeal. We do not want word to go out that we want to exterminate the [black] population and the minister is the man who can straighten out that idea if it ever occurs to their more rebellious members.” (Gordon, Woman’s Body Woman’s Right, p.332).

The above quote speaks of Margaret Sanger’s desires, wishes, or maybe just irresponsible, cruel, passing thoughts about eliminating a whole people. Many who have long studied her believe that she meant those words “to exterminate” as describing a plan she had. However, some mysteriously say she did not mean it that way when she spoke the word “exterminate.” At the very least it is highly suspect as to why she would ever choose a word like “exterminate” for communicating what was on her mind about a whole race of people for any reason! It seems to her pro-abortion cohorts that no speech is off limits, and every horrid sounding blurb was just an accidental gaffe, no matter how incredulous, extremely racist and hateful it sounds. Contrariwise, in reference to black people having diverse opinions or in parting from what she wishes for, she boldly calls those potential opinions “rebellious,” giving the impression that they, as blacks, are not allowed to exercise freedom of thought.

Planned Parenthood clinics have followed along the same lines as Margaret Sanger, who openly wanted to eliminate the lineage of those people who found themselves in vulnerable situations, especially poor and black women, and to work toward a type of supreme race. Planned Parenthood organization is the enemy of this great and diverse country, a country of many into one, and of the freedoms that we as Americans stand for. Margaret Sanger’s experiment must end if we are to go together, all of us, into the future strong and free.

The recently leaked draft of a majority Supreme Court opinion suggesting that the 1973 landmark Roe v. Wade ruling is on the verge of being struck down has flung controversial abortion advocate and Planned Parenthood founder Margaret Sanger back to the forefront of the abortion debate.

Sanger, a birth control activist and nurse who founded what became Planned Parenthood in 1916, has been mentioned by many conservatives on social media following the leaked SCOTUS opinion last week.

Sanger’s controversial writings and the uproar that resulted from them over the years caused Planned Parenthood to disavow her in a New York Times op-ed last year.

Sanger was a staunch supporter of eugenics, which was a popular method of supporting selective breeding that often targeted people of color and the disabled.

“It is said that the aboriginal Australian, the lowest known species of the human family, just a step higher than the chimpanzee in brain development, has so little sexual control that police authority alone prevents him from obtaining sexual satisfaction on the streets,” Sanger wrote in an essay titled, “What Every Girl Should Know.”

Margaret Sanger was a birth control activist and nurse who founded what became Planned Parenthood in 1916. (Bettmann/Contributor)

Sanger’s writings contain support for “stopping” the “reproduction of the unfit,” sterilization programs carried out by the Nazis. She was also a featured guest of the Ku Klux Klan.

“Seemingly every new approach to the great problem of the human race must manifest its vitality by running the gauntlet of prejudice, ridicule and misinterpretation. Eugenists may remember that not many years ago this program for race regeneration was subjected to the cruel ridicule of stupidity and ignorance,” Sanger wrote in 1921. “Today Eugenics is suggested by the most diverse minds as the most adequate and thorough avenue to the solution of racial, political and social problems. The most intransigent and daring teachers and scientists have lent their support to this great biological interpretation of the human race. The war has emphasized its necessity.”

Planned Parenthood said last year that it can “no longer make excuses or apologize” for Sanger’s writings and actions but “can’t simply call her racist, scrub her from our history, and move on.”

“We must examine how we have perpetuated her harms over the last century – as an organization, an institution, and as individuals,” the nation’s largest abortion provider stated.

Fox News Digital reported this week that Planned Parenthood had been silent as to how they have examined Sanger’s past since denouncing her.

A report by the anti-abortion Life Issues Institute indicated in 2017 that a spate of new Planned Parenthood “mega-centers” targeted women of color.

This is not exactly my position

Chicago Mayor Lori Lightfoot issued a chilling call to arms to political leftists to react to an anticipated US Supreme Court decision to rescind the infamous Roe v. Wade court decision that legalized baby-killing in America. The radical Chicago mayor fears that the court may also rescind its decision to legalize same-sex marriages.

The lesbian mayor tweeted, “To my friends in the LGBTQ+ community—the Supreme Court is coming for us next. This moment has to be a call to arms.’