Somehow the western media has got to find a way from “Ukraine is winning” to the reality of “Ukraine is losing”.

What has happened in Mariupol is an absolute tragedy that was avoidable.

It came, as far as I can see, from the nazi Azov batallion using the population as human shields, refusing to allow civilians to leave through corridors created for them.

That made a bloodbath inevitable.

See my other coverage.

How streets of Mariupol are being turned into cemeteries: Makeshift graves appear across the besieged port city as victims are buried under rubble with relatives unable to retrieve bodies due to heavy Russian shelling 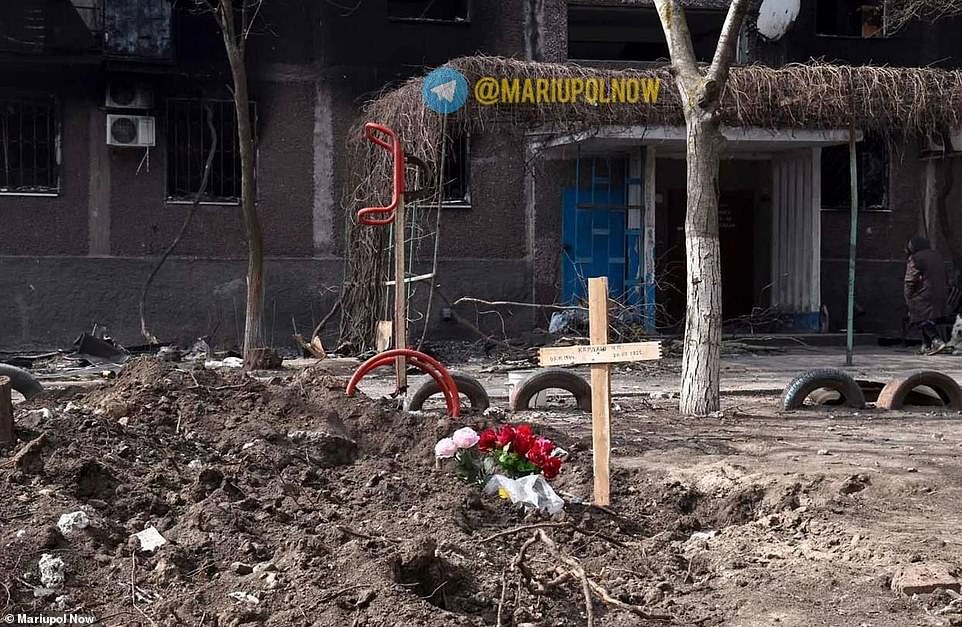 The streets of Mariupol are being turned into cemeteries with makeshift graves appearing across the besieged port city.

Bodies of both civilians and soldiers are becoming buried under the rubble of destroyed buildings or left out on the streets with rescuers unable to retrieve victims and give them a proper burial due to the incessant bombing.

It comes as the UN said on Friday that it had received more information regarding mass graves in the city – one of which is thought to hold up to 200 bodies.

Earlier this month, graphic images showed mortuary workers digging 25-metre trenches at one of the old cemeteries in Mariupol, and making the sign of the cross as they pushed dead bodies wrapped in carpet or bags over the edge.

Residents have also had to dig roadside graves opposite defaced residential buildings, with those not killed by the shelling having to endure a shortage of medical supplies, water and electricity.

Mariupol has seen some of the most intense fighting since Putin ordered his armies into Ukraine on February 24 as part of what the Russian strongman branded a ‘special military operation’.

Russian forces have been shelling the city indiscriminately, razing large swathes of the city.

More than 1,200 civilians are thought to have been killed as Moscow has been ‘terrorising’ the captive population with increasingly brutal attacks.

It includes around 300 people thought to have died when a devastating Russian airstrike destroyed a theatre being used as temporary refuge.

Matilda Bogner, head of the UN human rights team, said it had ‘increasing information on mass graves that are there’.