America’s true national debt is around $135 trillion, not the $27 trillion we are being told 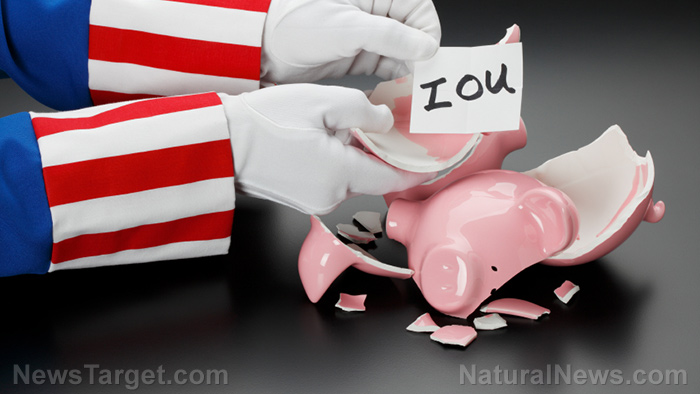 (Natural News) Anything in the trillions is a really big number, hence the warnings about our ever-expanding national debt, which officially hovers just below $27 trillion, is a hard pill to swallow. But what if we told you that the true national debt is more like $135 trillion?

Two critical elements of the debt equation, these latter two factors expand the national debt by a factor of five, rendering it astronomically higher than what we have all been led to believe.

Instead of owing $81,186 each, as of this writing, every American taxpayer would actually need to pay $876,000 in order to eliminate the true debt. How many of you have that kind of cash on hand, we wonder?

Truth in Accounting compiled an in-depth Financial State of the Union report analyzing what the federal government owns and what it owes. At the current time, the nation holds about $3.99 trillion in assets but owes $131.69 trillion in liabilities.

Unfunded Medicare promises clocked in the highest at $57.09 trillion in liabilities, followed by unfunded Social Security promises at $44.09 trillion. Publicly held debt is currently around $20.43 trillion, while pension and retiree health care liabilities are estimated at around $8.44 trillion. Remaining liabilities are said to be $1.64 trillion.

Add it all up while accounting for deterioration and you land at a whopping $135 trillion in debt — an amount that never in America’s wildest dreams will ever be paid off by any stretch of the imagination.

If you would like to see how Truth in Accounting arrived at these figures, you can check out the group’s full Financial State of the Union report at this link.

How long before the financial house of cards comes tumbling down?

The group says it used data from the U.S. Treasury Department and the Social Security and Medicare trustees to arrive at these numbers. It also updates them annually to include the assets and liabilities reported in the most recently issued Financial Report of the U.S. Government as of the federal fiscal year-end on Sept. 30.

“We also update the true national debt calculation when the Social Security and Medicare Trustees Reports, which include amounts as of January 1, are issued,” the group explains.

While the Trustees Reports include a calculation of the present value of the benefits these two programs will receive over the next 75 years, offset by the receipts directed to them during that time period, Truth in Accounting does not take into account receipts or benefits that will be received from and paid to future participants.

“In addition to using current law to calculate the unfunded promises, the Medicare actuaries also estimate the amounts using the ‘Illustrative Alternative Scenario (IAS),’” the group goes on to reveal about its methodology.

“We use the IAS in our estimates, because it incorporates more realistic assumptions about future payments to Medicare physicians … The estimated deterioration in the true national debt is based upon historical trends.”

It is clear that the financial house of cards known as America’s fiat-based currency system is eventually going to collapse. It simply cannot bear the weight of this insurmountable debt forever – especially when that debt is orders of magnitude higher than we were all led to believe.

You can keep up with the latest news about the impending economic collapse of America by checking out Collapse.news.