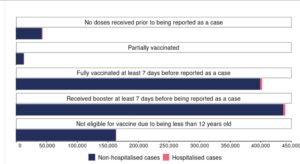 From these statistics the vaxxed represent 80% of cases 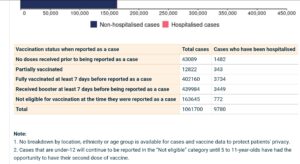 There have been 9570 new community cases of Covid-19 and another 32 deaths reported today, bringing total publicly recorded deaths with the coronavirus in Aotearoa to 1017 the Ministry of Health says.

In a statement, the Ministry of Health said the total number of deaths is up by 31 from yesterday as they had removed a case which had been previously reported twice.

“This case was initially reported on 10 March. The deaths being reported today include people who have died over the previous six weeks, since 5 April.”

The seven-day rolling average of reported deaths is 17.

“Of the people whose deaths we are reporting today; two people were from Northland; nine from the Auckland region; two from Bay of Plenty; two from Taranaki; one from Tairawhiti; four from MidCentral; two from Hawke’s Bay; three from the Wellington region; one from Nelson-Marlborough; four from Canterbury and two from Southern.

The seven-day rolling average of community case numbers is 8024 – last Wednesday it was 7533, the ministry said.

It said there are 425 people in hospital, including nine in ICU.