For further details and discussion, see the talk page. (To see what is hot, see recent changes)

This page was created to explore the details about the starting of the events leading up to the dire situation two years later. The “birthday of the revolution” is generally dated March 15, 2011. The general story goes like this: 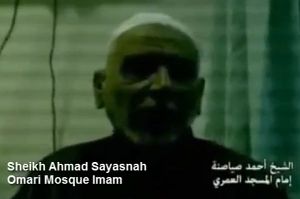 The events were triggered primarily by the children of Deraa scandal. A first demonstration took place in front of the mosque in the city centre. Children wrote tags on the walls criticizing the regime and demanding the withdrawal of the governor. They were immediately arrested and tortured (finger nails pulled out, etc.). Three of the children were killed. When their parents came to demand their release, the governor told them: « All you have to do is have more children. And if you are not capable, bring your women here and we will do it ourselves ». Publicly humiliated, the parents called on tribal leaders who organised demonstrations in front of the governor’s palace. The protests quickly turned violent. The governor of Deraa was later dismissed by Bachar al Assad, who met with the relatives of the victims.[1]

The significant violent events which triggered protests in other cities are said to have taken place March 22-24 in Dara’a. President Assad has repeatedly claimed in interviews that there have been unidentified snipers at those events who targeted both protesters and police forces.[2]

The discussion page contains a growing collection of roughly timelined sources which haven’t yet been compiled into a write-up fit to be included here. Most of that is on the incidents in Deraa which, pivotal as they are, could have done little without the early events in other areas of Syria, notably Homs, Hama, Idlib, and the coastal cities of Latakia and especially Baniyas and Jableh. (as well as some Damascus suburbs, and scattered other hot spots)

What A Closer Look On Syria has to offer is detailed research, where that’s available. The following pages already existing here deal with events in these first few weeks, if not strictly March: